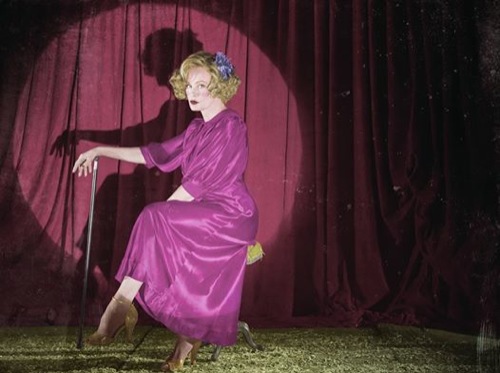 On the last episode one of the only surviving sideshows in the country struggles to stay in business during the dawning era of television. When police made a terrifying discovery at a local farmhouse, the eccentric purveyor of the freak show saw an opportunity that would lead her troupe either to their salvation or ruin. Did you watch the last episode? If you missed it, we have a full and detailed recap right here for you.

On tonight’s show, a citywide curfew threatens to shut down the Freak Show. A strongman from Ethel’s troubled past arrives at camp. Gloria arranges a terrifying play date for Dandy. The Tattler Twins reveal a talent that could knock Elsa from the spotlight.

The show opens with the freaks working in the circus. Jimmy Darling and the others listen to the radio; the program is talking about the recent murder that went down. Jimmy asks the others if they dealt with the body.

Two detectives show up and ask about the murder. They question Elsa, but she denies them the luxury of looking around her establishment without a warrant. The detectives say that there’s been a curfew put in place.

A man goes into a toy story looking for a man by the name of Mr. Henley. A small robot toy comes waltzing out from behind a shelf. It’s trailing blood. The man goes to investigate. Twisty the Clown is hiding in plain site, disguising himself as a mannequin next to other clown dolls.

Twisty kills the man. He stabs him in the throat with a knife from behind.

The freaks are having dinner in the banquet tent. Jimmy snaps. He’s having trouble coping after killing that detective.

Dandy is having dinner with his mother, and he begins throwing a fit because he is “turning to dust of boredom.” The family’s maid thinks that Dandy might’ve had something to with the murders around town.

The freak show gets two new visitors: Desiree, the three-breasted hermaphrodite, and her partner, Dell Toledo (the self-proclaimed strong man). They are looking for work. Elsa asks to see his hands. She determines that he’s a man who’s known hard work. She asks if he “barks.” He responds, “Hell, I could howl if you wanted me to.” It seems as if, despite Elsa’s reservations, she’s welcomed to new freaks into her family.

Gloria is driving down the road when she sees Twisty walking on the side of the road solemnly. She asks if he does private parties and propositions him to cheer up her son, Dandy, who’s been a bit “down in the dumps” lately.

Dandy visits Jimmy and asks to join the show. Jimmy says that he wouldn’t last one day here and sends him home angry. He stomps out like a child. In his car, he freaks out, and smashes his head against the steering wheel.

Dandy returns home and his mother, Gloria, shows him his new surprise — meant to cheer him up. She leads him into a play room. There, Twisty the Clown is waiting for him.

Ethel visits Dell in his trailer. She says that she doesn’t want him anywhere near her son, Jimmy. It appears as if Dell is his father.

Meanwhile, the crew is trying to teach Bette how to sing. However, she’s horrible. Dot gives it a try and, to everyone’s surprise, she’s amazing. Elsa looks on in horror, jealously clearly having taken over.

Dell comes in and says that everyone will be putting on a matinee. Elsa rejects this plan, but Dell grows an attitude and stomps off into town. “There will be paying asses in these seats,” he says.

Meanwhile, Dandy and Twisty are having their play session. Dandy finds him curious. He directs him to a toy box and asks him to find a new toy to play with. As he is looking in the toy chest, Dandy looks into Twisty’s bag. He sees the horror inside (what is probably a severed head). Twisty notices was Dandy is doing and smacks him in the head with a bowling pin.

The crew goes into the diner for a meal. They aren’t greeted warmly. Dell sees them in the diner and goes in to tell them all to leave. Jimmy puts up a fight. Dell isn’t having it, so he drags Jimmy out to the diner’s front where he proceeds to beat him up.

The children being held captive by Twisty seem to be making a plan at a getaway. Dandy has followed Twisty back to his secret lair in the woods. Twisty opens the cage holding the children and enters. He presents the small boy with a robot toy. Twisty gets no reaction, so next he shows the children the severed head. The girl whacks Twisty with the nail-board she made. In the process, Twisty’s mask falls off, revealing a missing lower jaw.

Jimmy returns to the show and has words with Elsa. She says that it might be good to have a man of strength around. He reveals that he can fill this position, and he reveals that he killed the detective who came to take away the twins. Elsa says that she may have underestimated him. Next, Jimmy reveals that Dell placed Elsa’s number on the bottom of the playbill. Elsa won’t have this. It’s her last straw. She says, “He’s got to go.”

The matinee proves to be a massive success. Dot blows away the crowd with her song number. The audience loves her. Elsa looks on in jealousy, especially when the crowd reacts with such excitement.

The detectives show up at the freakshow. They say they’ve received an anonymous tip, and they’ve come with a warrant. They say there here to search Dell’s trailer. Jimmy tried to set up Dell by placing the badge in his trailer, but Dell caught on and, instead, put the badge in another person’s tent — the boy who bites the heads off live animals.

The detectives take him away and throw him in the slammer.

Elsa comes into talk with Bette. She tries to brainwash her into thinking that she’s the real star, the one with the real talent, and the one with the pure soul. Elsa clearly wants Dot out of the picture because she’s got loads of talent. Before Elsa leaves, she calls Bette an angel and places a sharp object, perhaps a small knife, between her pillow.

Jimmy is drinking his pains away, when he confesses to his mother that he needs to tell the police everything. When he leaves the tent, a car throws a body out from the back of a truck. It’s the body of the innocent individual whom Dell set up. Jimmy breaks down.