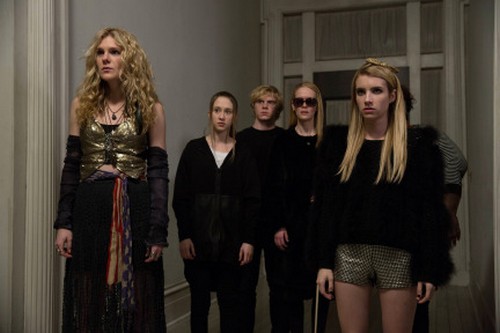 Our favorite creepy drama AMERICAN HORROR STORY continues tonight with another new episode called “Go to Hell”. On tonight’s show, the Coven’s future is in doubt after Cordelia’s latest vision. Did you watch last week’s episode? We did, and we recapped it right here for you!

On the last episode Fiona and Laveau had a deadly face off with The Corporation and Cordelia made a desperate sacrifice to protect the Coven.

On tonight’s episode, a dying Fiona will become even more desperate to find and destroy the new Supreme but will also wonder if she should give it up and just enjoy her final days. As the time approaches for the new Supreme to demonstrate the Seven Wonders, a dangerous ritual will prove the Supreme’s ability to master seven magical powers. More than one of the remaining girls will begin to manifest multiple new powers.

Tonight’s episode is going to be another spooky one and you won’t want to miss it. So be sure to tune in for our live coverage of FX’s American Horror Story – tonight at 10PM EST! While you wait for our recap, hit the comments and let us know if you are excited about the season 3 episode 11 of American Horror Story. While you wait for the recap, check out a sneak peek of tonight’s episode below!

The show begins with a scene from black and white video clip, which depicts a coven of witches performing the seven wonders: Telekinesis, Concilium (control of the mind), Transmutation, Divination, Vitalum Vitalis (control over life forces), Descenum (ability to descend into the afterlife/spirit worlds), Pyrokinesis (fire manipulation). Fiona can then be heard saying that performing the Seven Wonders is a dangerous feat and, sometimes, can lead to death. She’s talking with Queenie, who thinks she has Fiona all figured out. Queenie says that she thinks Fiona’s just trying to figure out who the next Supreme is so she can then kill her and preserve her own life. But Fiona seems tired — and maybe she’s given up on her own life and wants to ensure the future survival of her coven.

Cordelia, now blind, comes into ask Madison for help. She wants to “touch” Madison so she might be able to see something regarding Misty’s disappearance. In trying to avoid her, Madison employs Transmutation to deceive Delia. Cordelia is unsuccessful in seeing past Madison’s lie.

Meanwhile, Queenie hears Marie’s voice. She tries to locate her but she can’t. Queenie attempts a spell to leave her body. She has a vision of back when she worked at the fried chicken restaurant. Papa Legba arrives. Queenie asks him if this is Hell. He says, “No. This is your Hell.” He tells her that she better wake up soon — or that she might be fated to stay in this hell forever.

Queenie wakes up only to find Papa Legba waiting for her in the real world. She asks him where Marie currently is. He tells her what happened. Delphine cut her up into tiny pieces and scattered her all across the city. Queenie wants to kill Delphine but Legba says that’s impossible; as long as Marie lives, so will Delphine. However, Q comes up with an idea. Since Marie must offer Legba a service once a year to upkeep her immortality, and being that she’s currently out of commission (being cut up into pieces), perhaps her days are numbered. Legba admits that Queenie is “one crafty lady.”

Queenie goes to visit LaLaurie at her old home, where she’s currently giving tours. Delphine reveals that she nearly killed the tour guide. Queenie says that she’s going to offer Delphine a second chance at redemption, but Delphine is not having this. She says she won’t profess to be sorry. “Because I’m not,” she says. Queenie stabs Delphine in the heart. Delphine wonders how she’s dying — she’s immortal! — but Queenie says, “Technically not.”

Meanwhile, Fiona is getting her portrait painted. She’s not doing well in terms of her health and wonders why she’s going to spend her remaining days whining about her current predicaments. She needs to take action.

Cordelia visits Fiona, who tells her that she’s always been filled with power — her power, even her second sight, has always been inside her. Fiona gives Cordelia a precious necklace, which belonged to Delia’s grandmother. Cordelia realizes that Fiona is trying to say goodbye. “I mean it this time,” says Fiona. Fiona clips the necklace around Cordelia’s neck and, as she does so, Delia has a terrifying vision. All the witches are dead, every single one of them, bloody and splattered across the mansion floor. Fiona is responsible.

Cordelia realizes she’s seen a possible future and, playing coy, asks for her grandmother’s ring as well. Cordelia visits the Axeman to tell him that Fiona is not the woman he once thought. She tells him of Fiona’s plan — in fact, she shows him with her gift of sight. She says, “You feel that? That empty, heartbreak feeling? That’s what it’s like to get close to Fiona Goode.”

Next, Cordelia continues to look for Misty by running her hands over her belongings. She’s getting glimpses of her location. At the cemetery. She brings Queenie. Queenie asks how in the world they’re going to free Misty. Queenie says she’ll go find a maintenance man. Cordelia says no, that they can free her themselves. “When the rest of the world sees a wall, we see a window.” Queenie frees Misty, but she’s not doing well, so Queenie manages to perform one of the Seven Wonders. She revitalizes her life force.

Meanwhile, Zoe and Kyle return. Zoe thinks she’s the new Supreme. Misty enters the mansion as well after being freed. She attacks Madison. They have a long fight, and they’re eventually broken up by Kyle. Next, the Axeman comes at the coven swinging his axe, which is currently bloody. The coven pushes him away with a powerful spell. Myrtle notices a trail of blood. Cordelia bends down to see who the blood belongs to with her sight and she discovers it belongs to Fiona. She has a vision. In it, she sees Fiona whispering, “How could you do this to me?” The Axeman clearly harmed her.

Next, we see the event that led up to Fiona’s demise by the Axeman. The Axeman finds her airline ticket in her purse, and she tells him that he’s been “the most delightful distraction, a life preserve,” but that now she’s ready to find dry land again. She believes that once the next Supreme is dead that she’ll have thirty more years of vitality left before the next one comes along. The Axeman attacks her, grabs her hair, and throws her on the bed. She tells him to get off and, soon, he does. They talk for a bit more, kind of argue, and she begins telling a story about a small calico cat that her mother gave her when she was a little girl . . . but then the Axeman, well, axes her in the back. Repeatedly.

We’re back in the mansion now. After realizing that Fiona is really, truly gone, the coven kills the Axeman. First, Madison axes him. Next, they begin stabbing him with kitchen knives.

Next, we see Madame LaLaurie and Marie in the same Hell. Marie and Dephine, once immortal, are no longer living. Papa Legba says, “Eventually, everybody pays. Everybody suffers.”

The coven places Fiona’s new portrait on the wall. Cordelia says that her mother was a force to be reckoned with but she was a HORRIBLE Supreme. She says that by next week we’ll have a new Supreme and that every single one of the girls will be tested, since they’re all qualified.