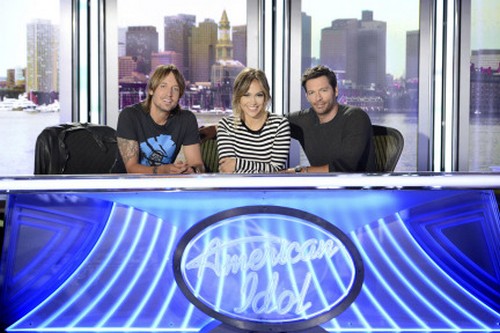 American Idol returns to FOX tonight with its 13 season premiere and they are calling this season AMERICAN IDOL XIII.  This year’s premiere will be a two-night extravaganza.  As AMERICAN IDOL XIII enters a landmark season in January 2014, the search continues to find amazing talent from across the nation.

Returning again this year is host Ryan Seacrest and the judges this season are Harry Connick, Jr., Jennifer Lopez and Keith Urban, along with in-house mentor Randy Jackson.  The show empowers contestants and viewers to share their voices in deciding who will be America’s next singing superstar.  Each year, tens of thousands of hopefuls from across the nation audition for a shot at stardom.  This year the show’s judges will travel across the country including stops in Atlanta, GA; Austin, TX; Boston, MA; Detroit, MI; Omaha, NE, Salt Lake City, UT; and San Francisco, CA, in search of the next AMERICAN IDOL.

Those who prove they have what it takes to move forward in the competition think they are headed to the “Hollywood” round. But, even before they unpack their bags, the contestants will learn they must compete in a surprise “Hollywood or Home” round.

Tonight’s show is going to be an exciting one, which I’m not going to miss and neither should you. So be sure to tune in for our live coverage of FOX’s American Idol XIII – tonight at 8PM EST! Celeb Dirty Laundry is your go to place for all the up-to-date American Idol News!

The season premiere of American Idol opens with a seventeen year old girl named Maria performing Bruno Mars’ song “Grenade” for Jennifer Lopez, Harry Connick Jr, and Keith Urban. All three judges agree she should move forward to the next round.

Harry Connick Jr. is excited to be judging American Idol. Jennifer Lopez enjoys “watching someone’s dream come true before her eyes.” Keith Urban thinks the best part is giving someone the opportunity to “ride the ride they are looking for.”

Harry Connick, Jennifer Lopez, and Keith Urban headed to Boston, Massachusetts for the American Idol Season 13 open auditions. The first potential singer is local Bostonite named Troy Durden, and he can also twerk (kind of). He sings a rendition of “Over The Rainbow” while twerking. Harry, Jennifer, and Keith all vote “yes” and give Troy Durden a golden ticket. The judges agree, “It is a long shot but it just might … twerk.”

The next contestant is 17 year old Sam Woolf, from Florida. Sam is singing “Lego House” by Ed Sheeran. Jennifer, Keith, and Harry all vote “yes” and give Sam a Golden Ticket.

18 year old Linsday Pedicone, 23 year old Ethan Thompson, and 20 year old Jillian Jenson also all receive Golden Tickets from the judges in Boston, Massachusetts. Jillian makes Harry Connick Jr.’s day after her audition and is the first contestant to give him a hug.

Taylor Hildauch, a 19 year old college music student performs “Before He Cheats” by Carrie Underwood next. Jennifer thinks her voice is really strong, but Keith thinks she needs some work. Jennifer votes yes, but Keith and Hank both say no. Taylor is not getting a golden ticket.

16 year old Stephanie Hanvey performs for the judges next. Keith and Hank think that she needs some work, but Jennifer thinks she connected to her emotionally. Keith, Jennifer, and Hank all vote yes. Stephanie Hanvey is going on to the next round of American Idol.

Up next is 22 years old James Earl, from Connecticut singing a song a song he wrote himself called “Everything In Life.” He says it was a “little razzle dazzle.” Unfortunately the judges don’t think it he has much “razzle dazzle.” He is definitely not going to Hollywood.

Jacqueline Verna, and 18 year old student from Pennsylvania performs for the American idol judges next. The judges aren’t impressed with her voice, and they don’t give her a Golden Ticket.

17 year old Austin Percario from New Jersey is trying out next, singing “Titanium.” His over-protective “stage Mom” stands by him while he performs. Jennifer, Harry, and Keith all vote “yes” and give him a Golden Ticket.

15 year old Kaitlyn Jackson from Norwich, New York is performing next. She is singing a touching song she wrote herself about her Grandfather (who passed away). The judges are blown away by Kaitlyn, it is unanimous, Kaitlyn is going to Hollywood.

Keith London, a 21 year old from Pennsylvania is signing an acoustic version of Katy Perry’s “Roar.” Keith scores a Golden Ticket from the judges, he is going to Hollywood.

24 year old Shanon Wilson from Houston, Texas is performing for J-Lo, Harry, and Keith next. Jeniffer “wants him,” Shanon has scored a Golden Ticket to Hollywood.

Stephanie Petronelli, a 22 year old cheerleader is singing Grace Potter’s “Ooh La La” next. Harry is concerned because she doesn’t “sing from her abdomen.” Jennifer and Keith both vote “yes,” Stephanie is going to Hollywood.

Keith, Jennifer, and Harry head to Austin, Texas to the next round of open-auditions. 17 year old Duran Cree will be singing Carrie Underwood’s “Cupids Got A Shot-Gun.” Harry and Keith both vote “no,” Durann is not going to Hollywood.

21 year old Savion Wright, from Texas, is singing a song he wrote himself for the judges. He has been singing for years, but he hasn’t felt ready to try out for American Idol until now. It is unanimous, Jenner, Harry, and Keith are sending him to Hollywood.

22 year old Madelyn Patterson, from Georgia, is performing for the American Idol judges next. Keith and Harry vote “yes,” and Jennifer votes “double yes.” Madelyn is getting a Golden Ticket to Hollywood.

Malcolm Allen, 21, doesn’t know how to play an instrument. He is afraid the other contestants have a leg up because they all brought guitars, so he plays an air-guitar during his performance. He says he is “literally in love with music, and if he could marry music he would.” Jennifer Lopez gives him a “triple yes,” he is going to Hollywood.

21 year old Rolando Guerrero is so smitten by Jennifer Lopez, he can barely sing her song for her. Unfortunately he doesn’t make the cut.

Munfairid Zaid is singing Adele’s “Crazy For You,” for his idol Harry Connick Jr. Harry is so proud of him he picks him up and rocks him like a baby, and then gives him his Golden Ticket.