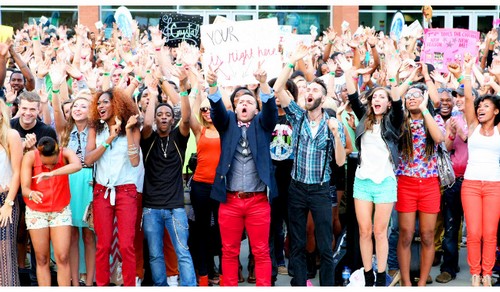 Tonight AMERICAN IDOL continues on FOX with a new episode.  Tonight’s shoe has been cut back to one-hour and the auditions continue in Atlanta.  Did you watch last night’s Detroit, Michigan’s episode?  We did and we recapped it right here for you.

On last night’s show the auditions continued and there were some awesome auditions and some fun times with the judges who continue to have great chemistry together.  The powers that be must be thrilled because ratings for the show continue to creep up.  By the end of the evening last night Detroit lived up to its musical reputation and  40 hopeful idols were were given golden tickets to Hollywood.

Tonight’s show is going to be an exciting one, which I’m not going to miss and neither should you. So be sure to tune in for our live coverage of FOX’s American Idol XIII Atlanta Auditions – tonight at 8PM EST! Celeb Dirty Laundry is your go to place for all the up-to-date American Idol News!

Tonight’s round of American Idol auditions takes place in Atlanta, Georgia. The judges Jennifer Lopez, Harry Connick Jr, and Keith Urban kick off the Atlanta try-outs with 21 year old Majesty Rose, a pre-school teacher. Harry thinks Majesty’s singing is “refreshing and elegant,” and Jennifer thinks Majesty’s song was “beautiful and effortless.” Keith Urban was “completely pulled in,” to her song. The vote is unanimous, Majesty Rose is going to Hollywood.

Jesse Cline, a 19 year old gas station attendant from Kentucky drove eight hours to Atlanta, Georgia to audition for American Idol. It’s a good thing he made the drive too, because Jennifer “loved it” when he sang. Keith and Harry are equally blown away. Jesse Cline is getting the next Golden Ticket to Hollywood.

19 year old Alyson Ragona, of Iowa, is performing for their judges next. Harry and Keith are fans of Alyson’s cat shirt, but not her singing. She isn’t going to Hollywood.

Chris Medina, a 23 year old from Florida, is audition for American Idol next. He brought his dog with him, but Harry hold her while he sings. Keith really liked his singing, as did Jennifer and Harry. Chris Medina, and his dog, are going to Hollywood.

24 year old Kristen O’Connor also traveled to Atlanta, Georgia from Florida to audition for American Idol. 17 year old Emily Piriz has been watching American Idol since Season 1, and a Golden Ticket would “mean everything to her.” Emily and Kristen are both going to Hollywood for the round of American Idol try-outs.

24 year old Ben Briley travelled to Atlanta from Tennessee to sing “Arms Of A Woman” for the American Idol judges. Keith Urban “loved the sound of his voice.” Jennifer, Keith, and Harry all vote “yes,” Ben Briley is going to Hollywood.

Georgia native Nica Nashae blow the judges away with her audition, they give her a Golden Ticket within ten seconds after her audition. The decision is obvious, Nica Nashae is going to Hollywood.

High-school student Jordan Brisbane plans to “shut American Idol Down,” by singing Bruno Mars’ “When I Was Your Man.” Harry Connick Jr. thinks he is “a pretty good singer, but in ten years he will be an amazing singer.” Jennifer Lopez thinks Jordan “is adorable,” and Keith thinks he has “raw talent.” Jennifer, Harry, and Keith all vote “yes.” 15 year old Jordan Brisbane is going to Hollywood.

22 year old college student, Sam Burchfield, will be singing for the Harry, Jennifer, and Keith next. The judges liked what they heard, Jennifer votes “yes” to Sam. Harry votes “no.” Keith Urban votes “yes.” It’s 2 to 1, Sam Burchfield is going to Hollywood.

Alabama native, Jessica Meuse is singing a song she wrote herself called “Blue Eyed Lie” for the American Idol judges. Keith, Jennifer, and Harry all vote “yes.” Jessica Meuse is getting a Golden Ticket to Hollywood.

Lauren Ogburn, a 19 year old, is singing a hit country song by Reba McEntire. Harry Connick Jr. liked her song, but wasn’t a fan of her accessories, the bandana was a little over the top. All of the judges vote “yes” though, Lauren is getting a Golden Ticket to Hollywood.

15 year Bria Anai has decided to sing an Adele song for the American Idol Judges. Keith loved the way Bria sings, and Jennifer loved her sparkly lipstick. The votes are unanimous, Bria is getting a Golden Ticket to Hollywood.

Overall, Jennifer Lopez thinks that “Atlanta was one of the best cities.” The judges selected 44 American Idol Contestants form Georgia, making it a grand total of 163 American Idol contestants heading to Hollywood for the next round of tryouts.