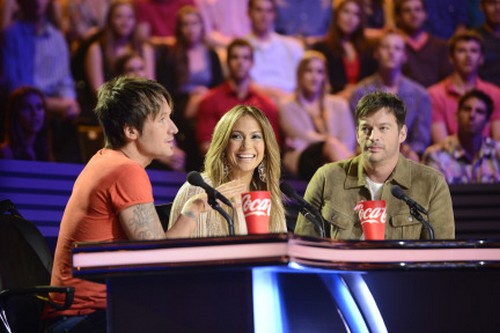 Tonight AMERICAN IDOL continues on FOX with a new episode.  Tonight’s show is the end of Rush Week and the Top 13 contestants who made the final cut are announced.  Did you watch last night’s episode when the Top 14 girls performed?  We did and we recapped it right here for you.

On tonight’s episode the Top 10 finalists chosen by America – five girls and five guys – will be revealed, followed by the Jennifer Lopez, Keith Urban and Harry Connick, Jr.’s  wild card picks to round out the Top 13 finalists.

Tonight’s show is going to be an exciting one, which I’m not going to miss and neither should you. So be sure to tune in for our live coverage of FOX’s American Idol XIII – Top 13 Revealed – tonight at 8PM EST! Celeb Dirty Laundry is your go to place for all the up-to-date American Idol News!

On tonight’s American Idol Rush Week Results Show, we will say good-bye several singers tonight, and by the end of the night the Top 30 will be narrowed down to a mere Top 13. First Ryan Seacrest will announce the Top 10 singers that America has voted for:

The first singer that the judges chose to sing a solo for the Wild Card spot is CJ Harris.

Judges Comments: Harry says he didn’t “feel any of the magic, and the band screwed it up.” Jennifer says she “felt the specialness of his voice.” Keith says CJ “drifted off and he lost me.”

The next singer the judges choose to sing a solo for the Wild Card spot is Jena Irene.

Judges Comments: Keith says “that was a very good use of that moment. When they cheered for you when you hit the high note you stayed right in your zone, and that’s star quality.”

The next singer the judges chose to sing a solo for the Wild Card spot it Spencer Lloyd.

Judges Comments: Jennifer says “We wanted to give you another chance because we saw something from you in the very beginning. I think you did a good job.”

The next singer the judges choose to sing a solo for the Wild Card spot is Bria Anai.

Judges Comments: Harry says “I don’t applaud most of the time because I am really really focused on you. You definitely sang for your life, but Bria it was all over the place. I think you overshot the mark.”

The last singer the judges chose to sing for the Wild Card spot is Kristen O’Connor.

“That was a really good performance of that song. It was really good. When you come out and the adrenaline kicks in, but if you sang that song a touch higher it would have easier for you.”

It’s time for the judges to announce which three contestants they have chosen from the Wild Card performances to join the Top 13. Spencer Lloyd and Bria Anai have been eliminated. Jena Irene, Kristen O’Connor, and CJ Harris have been saved by the judges and are part of the American Idol Top 13.