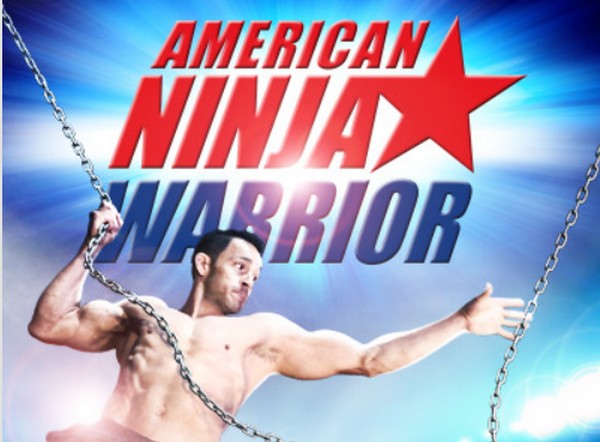 On the last episode of “American Ninja Warrior” traveled back to Dallas, Texas where the top 30 competitors from the Dallas Qualifier tackled the Dallas Finals course. They faced the Salmon Ladder, Swinging Frames, Pole Grasper and Spider Climb. Did you watch the last episode? If you missed it, we recapped it all right here for you.

Tonight’s episode looks like it is going to be great and you won’t want to miss it, so be sure to tune in for our coverage of NBC’s American Ninja Warrior, “St. Louis Finals” at 9:00 PM EST! While you wait for our recap hit the comments and let us know how excited you are about the show so far.

RECAP: The first competitor tonight is Raymond Butler and he makes it over the steps, he then gets to the rolling log and past it fast. NOw at the razor blades he leaps over so fast, now he’s at the swinging ropes and gets to the net. Raymond is now at the ladders and gets to the end of one and swings to the other; he’s now at the wall. He fails his first and second attempt, he goes right for his last one now; Ramond runs for it and makes it. Raymond is now at the salmon ladder, he fails it right at the first one.

Next up is Mich Pajcic, he had a weird curve in his spine and told himself that it wasn’t an option; he wore a brace through all of high school. He wnet ahead to keep working out and became very fit. Mitch makes it past the steps and is now on the rolling log; he gets right through and runs right across the blades. Mitch is now at the rope swing and makes it right to the net, Mitch is now making his way through the ladders; now Mitch runs up the wall on his first try. Mitch is now on the salmon ladder and failed.

Next up is Mathew Harris, he is a child at heart and has been watching the show so long with his wife and children. Matthew gets over the steps pretty fast and gets over the rolling log fast; he shoots right across the blades and swings over the ropes fast. He’s now at the ladders and struggles a bit but makes it to the wall; Matthew makes it on his first attempt and he is so happy. Matthew is now at the salmon ladder and makes it to the dice and loses his grip.

Brent Ruffin is next and calls himself the Redneck Ninja, he’s been a country boy all his life; he hunts and cuts his own wood. Living off the land keeps him in shape, he loves it a lot and especially being alone in the woods. Brent goes over the steps and through the rolling log; he runs right across the blades and swings over the ropes easily. He’s now on the ladder and makes it to the wall, Brent makes it on his first shot. Brent is now on the salmon ladder and fails right at the end.

Next up is Chris Wilczewski and has been on all 5 seasons, he’s been seeing this kid named Mikey who is autistic and Chris is helping him out with working out; it’s been the best therapy for him. Chris says it’s amazing to have made a positive influence in someones life, Mikey’s mother says Chris is a God send and loves how he feels so at home there. Chris makes it over the steps fast and hits up the rolling log, and rushes over the blades ; swinging right across the ropes fast. Chris is now at the ladder climbing right across and running up the wall fast. Chris is now on the salmon ladder and makes it to the dice, his arms are tired but he’s pushing himself to go for it and lands on to the platform swinging. Chris is now at the cliff hangar and is the first man to pass it today and is at the spider climb; Chris is the first person to complete the whole course.

Next up is Rob Moravsky, he’s always been a skinny kid and all he wanted to be was big; he went to gym with his dad a lot. He’s so happy to have his ideal body right now. Rob runs right over the steps fast and gets to the rolling log; he now gets to the blades running through them fast and jumps at the swinging ropes fliyng through them. Now he’s at the ladders and gets to the wall which he gets over on his first shot. Now on the salmon ladder, Rob fails on it and drops into the water.

Next up is Andrew Karsen, he shared this experience with his young son; he has been on all 6 seasons of the show. When he first competed his son wasn’t even bord, he’s really happy now to show his son that he can do it. Andrew makes it past the steps and rolling log fast, but also makes quick work of the swinging ropes; he now gets to the ladder. Now Andrew makes it up the wall on his first try and heads to the salmon ladder getting through it fast, now he’s finishes the dice and heads to the cliff hangar. Andrew is at the spider climb and is the third man today to finish the course at the fastest time.

Next up is Elet Hall and he rushes right through the steps and is on the rolling log rushing over it fast, now he gets to running over the blades and makes it to the swinging ropes and over the ladder quick. He’s now up the wall and at the salmon ladder fast and on the dice. He passes it fast and reaches to the cliff hangar, now he finished that and reaches the spider climb and makes it at the fastest time of the day to complete the course.

Next up is Michelle Warnky, she is a personal trainer and hosts Ninja events and she works really hard; she rushes over the steps and heads to the rolling log. She rolls over fast and heads to the blades; rushing over them fast and making it to the ladder; she struggles a bit but makes it through. Michelle is now at the wall and makes it on her first attempt and misses the bar when going for the salmon ladder.

Joe Moravsky is up next and he gets over the steps fast and hits the rolling logs, he then swings across the ropes fast and is on the ladder; he then gets to the wall and makes it up his first shot. Now Joe is on the salmon ladder he then hops up and goes up fast; hitting the dice next. Joe breaks the dice but swings from it and makes it, he’s now on the cliff hangar; he makes it past fast and is on the spider climb. Joe goes up it fast and becomes the fastest time of the day.