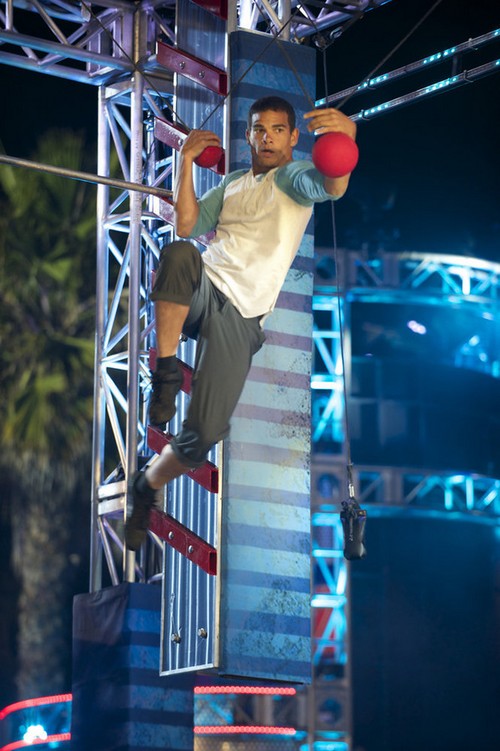 On the last episode of “American Ninja Warrior” the final qualifying round took place in Denver and featured the Cat Grab and Doorknob Grasper obstacles. Contestants included former competitor Brian Arnold; mixed-martial-arts fighter Michelle Waterson; Bull Bullard of the Harlem Globetrotters; BMX champ Morgan Wade; and fitness blogger Drew Manning. Did you watch the last episode? If you missed it, we recapped it all right here for you.

On tonight’s episode the top 30 contestants who were able to make it through the Venice Qualifier compete now in the Venice Final course, this is where it all matters who ever makes it to the next round be one step closer to winning the title of American Ninja Warrior along with $500,000.

Tonight’s episode looks like it is going to be great and you won’t want to miss it, so be sure to tune in for our coverage of NBC’s American Ninja Warrior, “Venice Beach Finals” at 9:00 PM EST! While you wait for our recap hit the comments and let us know how excited you are about the show so far.

RECAP: First up is Danny Goler and he is a veteran from the military, he makes through the first course and gets to the wheel; he spins right to the end perfectly. Now he’s on the ladder and crosses it with ease, next up he swings across the bars and gets to the net. Now he’s where he lost in the qualifier, he’s now crossing the pegs using all of his upper body; he stalls at one point struggling near the end. He lost strength in his arms and swung to the end but smashed into the platform.

Next up is Brennan Mejia and he is a circus performer, he lifts no weight; only other people and himself. He is always in the air and believes he’s got an edge with his training. He gets through the platforms in the beginning and moves to the spinning wheel but falls on it; he looks disappointed in himself.

Next up is Keita Kashiwagi who is a teacher, he was diagnosed with a disease where his vision is slowly going away; he’s lost a lot of vision in his left eye and has half of it in his right eye. He want s to prove to himself that he can do this. Keita, crosses the platforms easily and moves to the spinning wheel. Keita is now off to the ladder and he slowly gets past it; now Keita is at the swinging bars and crosses the net at the end; he’s now at the monkey bars. Keita is now at the peg slowly getting across; he swings his hips and lands perfectly. He fails his three shots on climbing the wall.

Next up is Justin Taylor he broke both of his ankles before but never let it keep him down, he got past platforms and now on the spinning wheel which he gets over fast. Justin crosses the bridge and is at the bars and swings across to the net with impressive speed. Justin is now at the monkey bars and crosses it wwell and on to the pegs; he had trouble wit hit before but is pushing himself this time across; he jumps and almost fails. Justin is at the wall now and makes it on his first try; he is now at the salmon ladder and fell down into the water.

Next up is James Sclar, he loves the competition of it; he crosses the platforms with ease and gets to the spinning wheel with ease and goes through the ladder fast and rushes to the bar swinging across to the net fast; he’s now the monkey bars; now at the pegs he’s going across it comfortable. He now swings back and forth than lands perfectly; James is at the wall. and makes it on the first shot. James is at the salmon ladder and fails instantly.

Next up is Derek Nakamoto he graduated from school and is pushing himself to keep working out; he sleeps like 2 hours a night. Derek gets through the platforms but almost goes down, next is the spinning wheel which he gets across fast. Next up is the ladder, he gets through it just barely. Now he’s at the swining bars, he flies right across to the net and is at the monkey bars and speeds to the pegs; he crosses it with ease. Now to the wall, Derek and makes it on his first shot. Now at the salmon ladder, Derek gets it up and is att cannon ball valley and falls right at the last one.

Next up is Travis Brewer and he is in a big brother program hanging out with a kid who is so inspired by him being a ninja; he helps him out to become one himself. Travis gets across the platforms easily and then to the spinning wheel, he gets across fast. He then gets to the ladder and gets across it fast, next up is the swinging bars and he makes it to the net. Travis is now at the monkey bars and gets to the pegs fast. He runs up the wall on his first shot and gets to the salmon ladder; Travis is going up slowly and is at the cannonball alley. Travis has his hand slip and he falls into the water.

Next up is Evan Dollard, he doesn’t like wearing a shirt when he competes; it makes him feel like he does better. He hosted a web series on how to train for this kind of event and trains hard so that he can make it to the top. Evan makes it across the platforms, now to the spinning wheel he gets across it slowly and is at the ladder; which he almost falls off of. Evan is now at the swinging bars and gets to the net fast; he’s now at the monkey bars and gets right through the pegs easily. Now to the wall, which he gets over on the first shot. Now it’s the salmon ladder again; van is now on the cannonball alley and falls on the third one.

Next up is Kyl Cochran and he is a type on diabetic, his dog LeeLoo and she helps him a lot. He takes his dog with him everywhere and she has opened up a lot for himself and gave him a new drive. LeeLoo is there toinight, Kyle gets through the platforms and now the spinning wheel; now at the ladder Kyle slowly gets across it. Kyle is now at the swinging bars and gets right to the net and is through fast. Kyle is now at the monkey bars and gets through the pegs with ease. Kyle runs up the wall and gets it on his first shot, he’s at the salmon ladder now. He is on cannon ball alley, Kyle and he just missed the platform and hit his face.

Next up is Thaddeus Robbeck, he is a fan of racing and other than that he also loves doing kendo; he has done it for 12 years straight. Thaddeus goes right across the platforms fast and on to the spinning wheel; he then crosses the ladder and swings through the swinging bars fast. Now on the monkey bars he crosses to the pegs slowly. Now he’s at the wall, Thaddeus makes it right now his first try. Thaddeus is at the salmon ladder, he’s going up it fast to the cannonball alley. Thaddeus falls right on the second ball trying to jump for the platform.

Next up Kevin Bull and he uses the outdoors as his training course and it’s his first year; wanting to show that rookies can make it too. Kevin makes it through the platforms and on to the spinning wheel, he runs right through the ladder and swings past the bars fast and goes down the net fast. Keivin is now on the monkey bars and makes it to the pegs fast,crossing with ease. Now he runs up the walls on his first shot and on to salmon ladder, Kevin messes up but gets right up it. Kevin is on the cannonballs now and grabs the last ball with his legs and swings himself upside down, then he is at the body pro and has to use his lower body to hold himself up, he struggles but makes it across. Kevin is at the final course the spider climb, he goes really fast and easily becomes the first contestant to beat the course today.

Next up is Dustin Rocho and he has changed his training to make it this season, he regrets failing last season right at spider wall walk. Dustin gets through the steps fast and is now at the spinning wheel. He crosses the ladder and is now on the swinging bars; passing it with ease. Now he’s at the monkey bars and through the pegs slowly. He runs up the wall fast and is at the salmon ladder and rushes right up to cannonball alley and passes it being the second man to do it. He’s now on the body prop but is having a little trouble, falling into the water.

Next up is James McGrath and every year it feels like he has a new job; he’s never got a real job because he can’t give up on his fitness dream. James makes it through the steps fast and onto the spinning wheel; turning fast and making it to the next obstacle. James crosses the ladder fast, and goes right across the swinging bars fast. Now he’s on the monkey pegs and gets through it insanely fast. James then runs up the wall on one shot and is on the salmon ladder and rushes it fast; now it’s the cannonball alley and lands it. Being the third man to get through it. He’s now on the body prop and falls.

The last runner is David Campbell, he’s the first person to have built serious ninja warrior obstacles and even has his own course to practice on. He crosses the steps easily and gets on the spinning wheel; rushing past the ladder. He gets through the swinging bars fast; he’s now on the monkey pegs and passes it. Now he runs up the wall on his first shot and is on the salmon ladder; he’s now on  cannonball alley and is the fourth finalist to get past. Now David is at the body prop and gets across super fast; rushing up the spider wall David beats Kevin Bull having the fastest time of the night.