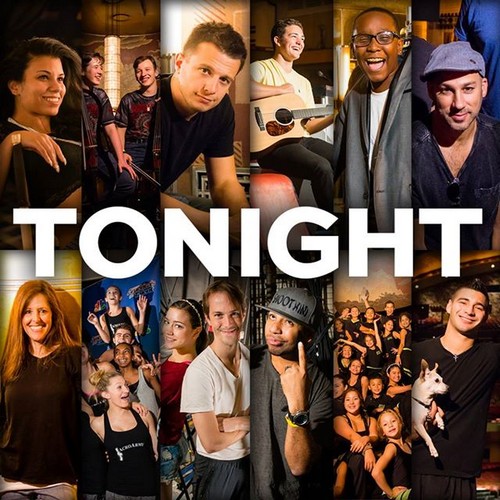 Tonight on NBC their hit reality talent show AMERICA’S GOT TALENT returns for the twentieth episode in its ninth season where the Semi-Finals continue as twelve more acts compete for America’s vote.

On the last episode, the votes were in and six acts from the previous night’s performance show moved on to join the Top 12 acts of the competition; Mike Super, Sons of Serendip, Miguel Dakota, Mara Justine, David & Leeman and Emily West. Did you watch the last episode? If you missed it we have a full and detailed recap, right here for you.

RECAP: First up tonight is Jonas Smith, it’s a great feeling for him to be back in New York City; he’s played at a lot of places there and was doing well. Though things didn’t keep going up as he wanted it to, eventually he became more dedicate and believes he’s got no plans to letting this dream slip through his fingers.

Mel B says that she is so pleased, that’s how you open up a show and that time after time Jonas delivers an amazing performance. Howie says it is the perfect show opener, the rasp of his voice and the passion is awesome. Heidi says that he did a great job tonight, Howard says that he wasn’t sure this was the best performance but still an amazing job.

Next up is Baila Conmigo, this salsa group was very greatful to get to go through the next round; they have worked really hard to improve their dancing. It’s very chaotic with how many people they have to dance, they have been dancing for years and even the children are very impressive.

Howie says that they are amazing and that he felt the kids were surely secret weapons; they steal the show with their talent. Howard says that they have to do something a little different, though believes the act might look better with just the kids; they need to change the energy up a bit. Heidi absolutely loved it and believes it’s one of the best acts; she was smiling so much. Mel B says she saw different things and loved their act a lot.

Next up is Jacob Curlee and he got a lot of flak by the judges on his performance; he was let through by America and wants to prove to them and the judges that he deserves to be there right now. He believes it’s a good lesson to learn, he’s leaving his past behind and is going to move on with his journey.

Howard says that he believes Jaycob rose to the occasion and picked a very smart song choice; he felt the connection and believed it was his best performance. Heidi says that he has a great voice, though has to say that she doesn’t feel the stage presence is there as he performs. Mel B says that he picked a risky song and believed that he didn’t do it big enough. Howie says that Jaycob is all in the hands of America.

Next up is Mat Franco and he is driving all across the country to make ends meet, he’s now in New York and loves magic so much. He even performs it in the streets, he love sharing magic to the world.

Howard says that first of all he compliments Mat getting rid of Mel’s phone, though his act was super exciting and is impressed at how well magicians are this year; he works the camera perfectly with his close up magic. Heidi has no idea how he did, it’s mind blowing; she can’t believe how the phone got in the seat. Howie says that he was just blown away, he couldn’t believe how amazing the act was; it was consistantly entertaining. Mel B says that she was so close to socking Mat, she loves her phone and that there is something about him that makes her act larger than life.

Next up is Acro Army and they are so happy they have been given a second chance to show the world what they can do; they are trying out some different moves and this means the world to them. They are willing to try whatever possible so that they can win this, they are going to blow America away.

Mel B can’t even describe it, she was at the edge of her seat; it was just incredible. Howie says it was amazing, he can’t even believe what he witnessed; they should surely move on. Howard says that this is exactly the type of act he wants to see, they do such an athletic performance that brings tons of excitement. Heidi loved it and says it’s exactly what people would love to watch in Vegas; they are already a million dollar act

Next up is Kelli Glover and she was so nervous with her last performance because this is something she has wanted all her life, her dad has always believed in her and knows she can do it; Kelli never felt like she was worthy for the big stage. Though she feels really good right now, she wants to show America she is ready for this.

Howie says that Kelli always starts it shaky, though brings it out full force between the performance; she is surely worthy. Howard says that each time he sees her, she looks like she could do a beauty pagent. Heidi says that she came up on top with her confidence and stage presence. Mel B says it’s frustrating because she can sing, though she lost it tonight; she doesn’t feel Kelli is giving it her all.

Next up is Howard’s wild card Wend Liebman a female comedian who Howard felt got robbed because she is so funny; she felt bad when she had to go home; though she got a phone call from Howard so he picked her and she just can’t believe he liked her act this much.

Howard is so glad to bring Wendy back and believes that she does something so different with her act; he hopes America appreciates how she brought her A game tonight. Heidi says this is the comedy she loves, it’s intelligent and relateable and feels like it was great. Mel B loves how funny she is and showed how talented she is. Howie thanks Howard for bringing her back, he loved her performance and believes that comedy is the hardest form of entertainment; he’s proud of her.

Next up is Blue Journey, they have been big fans of dancing since they were young; it was just something they never though they could do what they are doing now. The two are so happy to be here and dancing for America, they hope to impress them with their performance tonight.

Heidi says that they are perfect, she loved how beautiful their performance was and one of her favorite acts. Mel B says that the ammount of creativity was mind blowing and captivating; it was amazing and she loved it. Howard says that only one act can win and they have a good chance; he is very amazed with them. Howie says that they created their own entertainment, it’s just so original and amazing; he absolutely loves it.

Next up is Emil and Dariel, the both play the cello, they have a passion for the instrument and it’s their dreams are for them to be just as entertaining as a lead guitarist in a rock band; showing off their passion and energy through their music.

Mel B says she can’t believe how they came out and smashed it; they had perfect energy and they had such a hot performance. Howie says that it was perfect, though it felt like Paul McCartney didn’t show up at a concert; like they were a fill in. Howard says that it’s mind blowing with how talented they are, he can see them doing something with a singer. Heidi says she loved it and would also like to see their grandfather perform with them on stage.

Next up is Smoothini, he started doing magic in the streets and he can’t believe he made it through; he was so sure he was going home. This second chance makes him feel like he’s got to do something much bigger; he’s been practicing a lot by doing some basic things to impress people, he is now ready to do it and he’s going to work hard for his family.

Heidi loves how he does this close up magic and keeps them so busy, she has no idea how he did it. Mel B says that she is trying to figure this out, she feels so mesmerized and does feel like he stepped it up and he is great. Howie says that he’s a big fan, though he felt the room exploded tonight and that he made this night amazing. Howard says he likes Smoothini, he has a great personality and feels his act is a little small for it; though feels he needs to make a bigger connection with the audience.

Next up is Christian Stoinev and he has been practicing like crazy lately and Scooby is living the high life lately; he bought him a steak for dinner and took him shopping.

Mel B loves him and Scooby, though felt the act wasn’t really enough; she wished there was much more to it tonight focusing on him. Heidi says she can watch him perform all day, though loves Scooby with a passion. Howard says that he knows he’s good and that Christian got very relaxed and wanted a little more balancing than a dog act. Howie says they did a great job, though feels like there could have been more.

Last up tonight is Quintavious Johnson, he has got a lot of girls approaching him now with his new found singing passion; though he knows girls come after the dream. His grandmother and him sing all the time togeteher, he is going to dedicate this song to his grandmother.

Heidi can’t believe how much of a powerhouse he is; Mel B says he’s got it without a doubt. Howie says he’s golden and truly talented. Howard says that he knows exactly how to sell a song and an act; he’s obviously got the talent to move on.