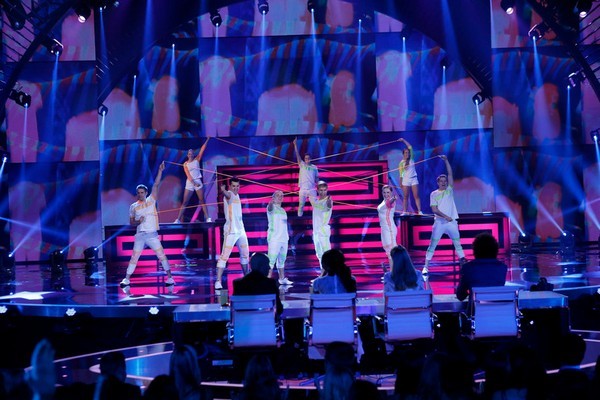 Tonight on NBC their hit reality talent show AMERICA’S GOT TALENT returns for the twelfth episode where twelve of the Top 48 acts perform at Radio City Music Hall in New York City.

On the last episode, we got to see which 5 acts out 12 were going through to the semi finals round. The acts that made it though were Emily West, Dan Naturman, Miguel Dakota, David and Leeman; it was down to Baila Conmigo and Flight Crew Jump Rope, the act that made it through thanks to Howard Stern who had the last vote, was Baila Conmigo. Did you watch the last episode? If you missed it we have a full and detailed recap, right here for you.

On tonight’s show, judging is turned over to the American viewing audience again as twelve of the Top 48 acts perform live at Radio City Music Hall for the chance to win the $1 million prize and become the most talented act in America. Starring celebrity judges Howie Mandel, Mel B, Heidi Klum and Howard Stern. Hosted by Nick Cannon.

RECAP: Howie says that tonight is going to be surprising and exciting; hoping he gets a million more followers on his Twitter. First up is Hart Dance Team, they love dancing with a passion and never get tired of it; they couldn’t believe Mel B came to see them and tell them they are moving on. They understand that they have to push themselves harder now, they take their dance very serious

Mel B says that was stunning to watch, she couldn’t believe how amazing everything was and thought it was very entertaining. Howie says that this show inspires people and that they use props so well and loves how they use it so well in their dance. Howard says they went right through because they were amazing and feels like this time they kind of did the same routine; they were hidden and came out again. He would like a different concept next time, it fell flat for him. Heidi says she agreed with Howard, she loves the dancing and everything but felt they needed much more to their performance; she knows that they can do it.

Next up is Luke Rollins and he is a Wild West show man and wants to try his best to help his family; this is his dream and this is the biggest opportunity for him and he’s putting it all in this next performance.

Howie says that Luke delivered and loves seeing this performance so much exciting; he love the fire. Howard says the have just seen a superstar, he’s an athlete in his prime and it’s pretty awesome; he loves the act but wonders if America is going to be super interested with this all the time. Heidi says that he is like a circus and rodeo act; she wants to see more. Mel B has to say she loves his act, though if it can be for an entire show; she’s not so sure right now.

Next up is the salsa duo John and Andrew, they both walk into a club and get funny looks until they start dancing; John is straight and Andrew is gay. They figured that it didn’t matter being two men, they work together well and dance with a lot of power.

Howard says that it’s good to see them and that they are a great dance act; he finds them super exciting. Heidi says that technically they are visually amazing, she loves how fierce they are and how they can be so fast. Mel B says that there’s no doubt that they are talented, though believes it wasn’t too exciting; they lost her a bit. Howie thinks that they dance so well together and that it’s very exciting; he loves their act.

Next up is Livy, Matt and Sammy; they all love music so much and have been fans of music. Their audition is their very first time performing together, they like to think they are professional with their music; though they like to listen to a lot of old songs. They can’t believe that they’re going do their third performance together at Radio City Hall.

Mel B says that she thinks that Livy is a solid singer, almost pitch perfect; though it felt something was missing in the performance tonight. It was super safe and didn’t grab her attention. Heidi says it was lack luster and snoozy; she didn’t feel the energy. Howard says that their performance was like an opening act, it wasn’t headline material. Howie says he feels Livy was a bit nervous and is certain she is a super star, this is one moment that America will save them because they are an incredible act.

Next up us Andrey Moraru and cam to America ten years ago, he still remembers his first time getting here; in Ukraine there was so much poverty and it was different to be here. The circus blew his mind and he wanted to be like the people in the acts; he thought they were impossible. He wants to prove that anything is possible and simple people can do incredible things.

Mel B says that she did not want that to stop, she could not believe how he was doing the things Andrey did; she would spend money for his show any day. Howie says hands down best act of the night, he’s what he wants to see. Howard mentions how Andrey is so artistic with his performance, it’s like art coming to life; he was so amazed. Heidi says he’s absolutely captivating and fantastic; America needs to vote for him or she’ll be heartbroken.

Next up is Juan Carlos and he believes he’s the best roller blade dancer in the world; dancing makes him feel like he’s the most amazing person in the world. He loves dancing and roller skates everywhere he goes, he loves to make people happy all the time. He’s been hair styling for 27 years, though performing makes him truly happy.

Howie says that the thing is that he gets killed on Twitter for this, he just shows up and everyone smiles; to him Juan is a winner. Howard says the force laughter coming from Mel B and Howie is so annoying; he can’t believe that this guy got through and is so upset that the talent didn’t make it. Heidi admits that Juan makes her smile. Mel B says that it was hilarious and loved every minute of it, Howard is really mad about it.

Next up is Mara Justine and her family supports her so much with her singing; her mother is a cocktail server and there isn’t much money but she works hard to get these kids where they want to be. Mara loves her mom and that she believes in her so much; Mara is so happy and loves her mother so much.

Howard says that it’s amazing that a 12 year old girl doing such a great performance. Heidi loves the growl in Mara’s voice, she wants her to sing stronger songs though. Mel B says that started off rough in the beginning but built her confidence through it. Howie says that Mara rose to the occasion and believes her performance was a huge success.

Next up is Aeriel Animations, she loved comics and cartoons because anything can happen in them; she combined her act with her drawings and it makes her feel so happy.

Heidi says that her favorite part of the act is the concept with her interacting with the story being told behind her; it’s unique and different. Mel B says it was really good and loved how she stepped it up even more from the last performance. Howie says that he can’t believe she started off where she left her act at last time she performed for them; he loved it so much. Howard says that she is adorable and the first time he saw she was incredible and now knows she has to move on for sure.

Next up is Jacob Curlee and he took care of his little sister when they were in foster hom; his sister loves him a lot and could not ask for a better brother; when he was adopted he was so happy to have his parents.

Heidi says he has a sweet voice but felt his performance was underwhelming, she wanted him to show off his voice a little more. Howard wanted him to be passionate in his singing and less control. Mel B felt like Jacob could bring so much more to the performance tonight, it wasn’t enough. Howie says that it was a great performance and believes he’s beautiful.

Next up is Matt Franco, he went to go see his grandma who taught him magic; she really helped him become the magician he is right now. He was super shy and magic helped him come out of his shell, he always wanted to go to Radio City Music Hall; his grandma is insanely proud of him.

Heidi says his performance is so good, she has no idea how she did the trick; she tried her best to figure it out but couldn’t. Mel B once again had no idea how he does it. Howie says he had no idea what happened and can only say wow. Howard says he make magic cool and a magician should really go to the top five.

Next up is Darik Santos, he’s making no money from comedy right now; he’s a security guard and does nothing all day but work on his jokes. He’s been dating his girlfriend for three years, living at her dads house; he hopes her dad will like him. His girlfriends father hopes he wins so he can move out.

Mel B says that she likes him but didn’t laugh at all this time around, which isn’t good. Heidi loves his personality, though his material isn’t that funny; she wasn’t laughing much. Howard says that he loves his material and how interesting he is; the problem is that he needs to show off more of himself. Howie doesn’t like the judging panel, he believes that a comic says things funny; he is a funny guy Howie wants to see on TV.

Next up is Act two, they have been friends since college; they live far apart from each other and are happy to finally be together. They have wanted to be an opera duo since college, they are dedicated to succeed.

Heidi loves opera music and is just amazed how they sing so beautifully; hoping America votes for them. Mel B says that yet again they surprised her, when she heard the song start she was worried; though it turned out to be amazing. Howie loved the tone and power in their voice. Howard says that they have the big voice and to him it was all strange; he just felt it was a little off and not dynamic enough for him.