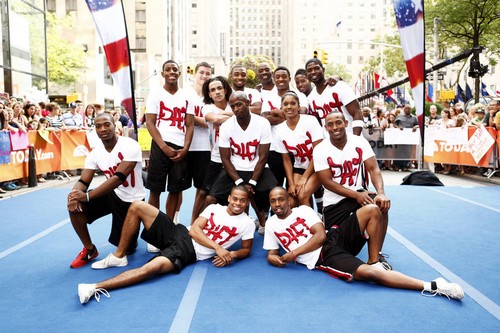 Tonight on NBC their hit reality talent show AMERICA’S GOT TALENT returns for the tenth episode in its ninth season and twelve of the Top 48 acts perform at Radio City Music Hall in New York City.

On the last episode, the TOP 48 ACTS were ANNOUNCED DURING JUDGMENT WEEK, celebrity judges Howie Mandel, Mel B, Heidi Klum and Howard Stern narrowed down the competition. Nick Cannon hosted this top-rated summer series which features a colorful array of hopeful future stars as they compete for a chance to perform at the famed Radio City Music Hall and win the $1 million prize. Did you watch the last episode? If you missed it we have a full and detailed recap, right here for you.

On tonight’s show, judging is turned over to the American viewing audience as twelve of the Top 48 acts perform live at Radio City Music Hall for the chance to win the $1 million prize and become the most talented act in America.

We will be live blogging America’s Got Talent. So make sure to come back to this spot and watch the show with us. Make sure to refresh often so you get the most current info! While you wait for the episode let us know what you think of the top 28 acts chosen by the judges!

RECAP: Judgement week is now over and we are now on our first live show tonight, first up tonight is Shawn and Luke; they have been friends since 3 years old and started dance because gils like it. Howard strongly dislikes them, they know it and are going to work hard to prove to America and Howard they belong.

Heidi says they did really well making a modern approach to tap, Howard says that he likes them but the thing is that the show is nice, but it is in no way memorable. Mel B says that she thinks it’s a great night to open up the show, it was great and thinks they both are very talented. Howie says they are in the right track and that America is going to surely love them.

Next up is Valo and Bobby who met at a circus, Yanni their child wants to be as strong as his father; they are working hard to make sure their son Yanni can have an amazing future. They risk it all tonight for him.

Howie says that it’s crazy, the producers thought that this act was way too dangerous; he couldn’t breath and is proud they survived. Howard says that their act knows how to entertain an audience and hopes everyone at home notices how talented they are. Heidi is impressed with how they went big; Mel B says she was terrified and thought it was scary. It was so awfully good, it made her so worried.

Next up is Julia Goodwin who started singing in her basement, she lives in a small town; she has been singing for as long as she can remember and her father introduced her to music.

Howard says she has a lot of poise and that this is competition is tough this year and was sure her voice wasn’t holding up enough; though she did a good job.

Heidi says that she is giving them a glimpse of what’s to come, Mel B says she is so stunning, though her voice is very delicate; she wanted a little more from her voice. Howie says she is young and talented, though he felt she was more like a Broadway performance.

Next up is Baila Conmigo, they started off as a small dance studio but have grown quite a lot; they are very proud of their dancing and hope to impress America. They want to make sure that they can win this, they plan on giving it their all every performance.

Heidi just says that they brought the house down; she was so impressed with how fast they were and accurate. Mel B says that she can’t believe how young the kids are dancing, they are just so incredible. Howie says the level of talent is so crazy, he never knew feeding kids some espreso was so amazing; there are no words for their talent. Howard says that this is like a big party on stage, they do a fantastic job at performing.

Next up is David and Leeman, they are friends who met street performing together; they became a duo. One of the mis a teacher and the other works at a coffee shop, they absolutely love performing and can’t believe they made it through. They now want to manipulate America.

Mel B can’t believe what they did; she’s so confused on how the hell they did that. Howie says he’s baffled by their act, he’s so confused and knows nothing. Howard says that being real they are super likeable and their tricks are different and they are always surprised. Heidi says that she loved their last act better than this; the presentation was a little a muddy this time around.

Next up is The Willis Clan, a family of 12 kids; everyone helps out in the family and they make it work. This competition is so important for them and they have been practicing for so long to get this performance perfected, they are going to bring it.

Howard is a big fan of them and felt their performance wasn’t really strong, it fell flat for him. Howie says that he felt he liked the song choice, though he feels like they might not be a big stage performance act. Heidi says they are loved and like their act. Mel B says she loved them and what they do; though feels like Radio City Hall swallowed them up tonight.

Right now is Flight Crew Jump Rope, they come from all over America; they never really get good practice before and once they all got together they finally got some good work together. They have three levels going on, if one thing goes wrong the whole thing fails.

Howard points out how this show is live and loves how their act could have anything go wrong, they saw nothing go wrong. Heidi says she loved their act and never saw jump rope on a trampoline before. Mel B says that was off the chain, their precision was insane and never wanted it to end. Howie says he loved how they stepped it up big, what he loved mostly was how they made is so spectacular.

Next up is Jasmine Flowers, they want to prove to the judges and to America that their act is perfect as an international performance; they are going to work hard to do the most perfect performance of their lives.

Heidi says what they did was so pretty, she loved all the different shapes they made. Mel B says everytime the come on stage they make her feel like it’s super pretty; she feels like their act is an aquired taste. Howie says they have amazing technique and it’s beautiful to watch. Howard says that maybe this brought out a weird energy, they saw amazing work but something happened; maybe he didn’t love this routine as much as their others.

Next up is Emily West, she started singing at 8 and was shy as a kid; so singing helped her get over the shyness. She graduate high school and moved to Nashville; though not everything went well for her. She loves music and decided to come home though; she had no job in place. When she lost her record deal she was sure she’d be done, but is now at Radio City Hall and si going to give it her all.

Mel B says that she hit it in every way possible and sang it like it was a classic song. Howie says that he is a huge fan and loved it; it’s the best act of the night so far to him. Howard says that her talent is why her loves this show, she is so original and loves her sound. Heidi says she is a star and has the totally package.

Next up is J.D. Anderson and he is a strong man; he has to take care of his body all the time to make sure that his body is in it’s best condition to risk his life on the stage.

Howard says that he loves this crazy man, he’s so glad he repeated the ice trick; it’s amazing live. Mel B says that it was crazy to see him do this, she said that she loved his personality but loved his entire show. Howie says that there is no way he could do that, he can’t believe how he’s not bleeding anywhere. Heidi says that he must be nutty to do this, though he is amazing at destroying things.

Next up is Dan Naturmin a comedian, his days usually start off by waking up; he came to New York being a student in law. Though he loves Comedy more than Law and it’s all he wants to do, he has never been married at 44 and feels it’s weird; he’s hoping for success at this point.

Mel B says when he started and thought he is very awkwardly confident, Heidi says that she had her in the beginning then got a little lost and was picked up again. Howie says that he is funny and believes he’s on his way to a brand new TV. Howard says they are now rolling, he thinks Dan is so good and can see how well he is on stage and hopes he goes far.

Next up Miguel Dakota, his parents divorced two years ago and he had to drop out of college to help financially; so now all he does is work construction jobs to help out with them.

Heidi says that she thinks he was really smart to sing such a beloved Beetles song and thought it was awesome. Mel B says it was a hot performance, Howie believes that performance could win the million dollars; he absolutely loved his singing and he is a superstar. Howard says that he will rain on the parade a bit, he hates to bring it down but thinks Miguel has star quality from him; loved the song but felt the performance lacked a bit of charisma.