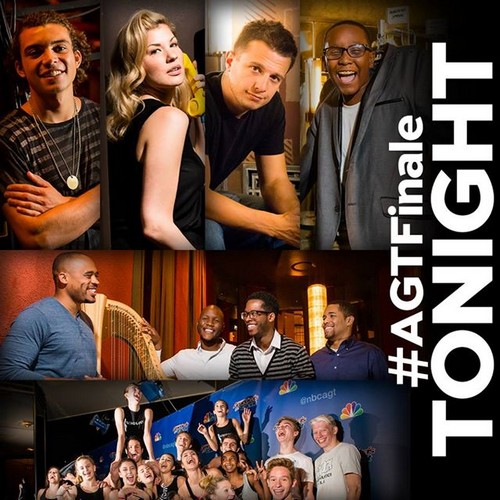 On last week’s episodes the top 12 acts of season 9 performed live at Radio City Music Hall in a 2-hour show.  On the episode after the performance show the Top 6 were revealed who will move forward to the finale.  The Top 6 are: AcroArmy, Sons of Serendip, Quintavious Johnson, Emily West, Mat Franco and David & Leeman.

On tonight’s episode the final 3 acts perform for the final time to win the $1 million prize and become the most talented act in America.  A star-studded list of celebs will be appearing on the finale including Cyndi Lauper, rocker Travis Barker,  Lenny Kravitz, Jennifer Hudson, Pitbull, Ed Sheeran and Train.one.

First up tonight is Quintavious Johnson, the youngest finalist in the competition; he was just a normal kid and now is a performing on one of the biggest stage in the world. He’s hoping tonight isn’t the end of the road for him, if he makes goes home then he will still be happy to have been given this opprotunity of a life time.

Mel B says that Quintavious is the perfect opening act for tonight and his voice is just killer, he sings so powerfully and has amazing confidence; she is so impressed. Howie says that his music fills his heart and America’s as well, loves his outfit. Howard is feeling Quintavious all over this place and believes that he owns the stage and commands it like a pro; he believes he has a good shot. Heidi says after the show last week Quintavious said he wanted to be a singer because he believes there is nothing else for him; she loves his dedication and love for singing.

Second up is magician Mat Franco, he knows that this is it and can’t believe he’s in the top 6; it’s an amazing and overwhelming feeling. He auditioned on a whim, he wasn’t seriously expecting he’d go this far, he loves coming out and surprising people; he’s going to do all he can to make this work.

Howie says that Mat has an amazing set of balls, he has the whole package; he’s got so much charisma and presents his tricks so well. Howard says that he feels bad for Mat since singers have it easier, though Mat had to come out and put a new spin on something he’s done; it’s impressive that he did this close up magic so perfectly. Heidi says she was dazzled by his rhymes and quicks hands. Mel B says she absolutely adores him, he is so slick and does it like it takes him no effort; she believes he’s got everything.

Next up is Emily West, she wouldn’t be here without her families love and support; they are all here tonight to watch her perform. Her parents are just so proud to see where she is now, it just really tugs at their heart; she is going to sing Chandilier. This song made her realize things can really change and will show America who she is as a singer.

Howard says that it was such a moving performance and before he became a judge on the show he was a fan of it, he knows nobody at home fast forwards her act; she’s just too good. Heidi says that she never heard Chandilier before she sang it on the show, she is so happy for singing her it tonight. Mel B says she liked it the first time, there was something missing a bit in the beginning. Howie agrees and hopefully that her second song does amazing later tonight.

Next up is Miguel Dakota, a few months ago he was working and pursuing music at bars; he had no idea that he’d have gone this far into the competition. He is performing Salvation Army tonight which he plays for his family back home, they are his main reason he wants to succeed.

Heidi says that this week he found his voice and did it much better than last week, Mel B says that she can sense the nerves in that song; though he still has that special extra something. Howie says that America is going to vote and it is about marketing, he’s got the full package to be in the current music industry. Howard says that he doesn’t buy into it at all, though he did a good job; though it wasn’t enough to win.

Next up is Sons of Serendip, when they first auditioned they never knew they’d get to the finals; it was their first time to perform in front of an audience. This entire journey has been incredible for them, they feel like as a group they belong together and want to go all the way.

Mel B says that there is a reason they have four singing acts left, America loves them because they always nail it with their incredible talent. Howie says that if you are voting strictly based on talent then these guys are the sure winners, they are musically gifted. Howard says if they don’t win then it’s an image problem, though they are won over time and time again because of their talent; they are very superior. Heidi says that they deliver such a believeable performance, they are always great.

Next up is Acro Army, they are performing the Immortals which they did in the semi-finals and that really blew the minds of the judges and all of America; they felt it was challenging because it wasn’t working at first. Though they figured it out and want to re-create the performance.

Howie says that he is just amazed at them, what they are doing is a sport; he loves it without a doubt and would give them a gold medal without a doubt. Howard says that he hopes that their talent translates on TV because they have a chance at one millions dollars. Heidi says she feels like the have the best chance of winning the show. Mel B says she would pay money to see their show right now in a heart beat.

Up again is Mat Franco, he’s got a bunch of the audience on stage for his performance; in the finals his grandma came down to see him live. He’s so excited and happy to have her here to watch him live. Mat believes his dreams have become a reality, now he has to just win it all.

Howard says that he did a great job, though he says that he believes that this season is the best and knows anyone could win without a doubt; he would love to see a magician win this year.

Mel B is so amazed at his magic, she is speechless. Heidi loves how Mat is good at both large scale magic tricks and up close ones. Howie says that his grandmother must be proud, he is worth a million dollars without a doubt.

Next up is Sons of Serendip, they just can’t believe all they have accomplished in this competition; they all now feel like brothers and love what they do together. Win or lose they will continue to perform with each other.

Heidi says that they are stellar, she can’t believe how tough the choice is for America this year. Mel B can’t believe she saw them crying as they performed and the fact that they kill it every night; she’d love to buy their album right now. Howie says that their performance is beautiful. Howard says that the did an incredible job with performing this song, it was beautiful and that they made it so heart touching.

Next up is Quintavious Johnson, he can’t believe how he made it to the finals at 12 years-old, he’s taking his last performance to another level and will bring America to church. His family is insanely proud of him and they are happy that people are recognizing his talent.

Mel B says that Quintavious is a joy to watch and can’t believe his 12 years old singing with that much emotion and passion; he’s a true super star. Howie says that was a winning performance and lets people know that he is not only talented but a good person. Howard, says that anyone would be pleased with his remarkable performance. Heidi says that it is amazing to see Quintavious blossom through out the competition; she is proud of him.

Next up is Miguel Dakota, when he was younger he had no idea what he wanted to do; but when he got a guitar for his birthday and started singing. He felt it was right, ever since then music has been his companion and helps him connect emotionally. Being in the finals has made him realize that this dream can be a reality.

Heidi says that with this performance he kind of full circled, she really likes the additions to his performance; though he has millions of fans that love him. Mel B says that was a big risk with that song, she hopes America likes his risk too. Howard admits that was his best performance. Howie agrees that selling his talent is with his charisma, he wishes the best of luck.

Next up is Acro Army, they are just one step away from being the winners and they know that all their hardwork is going to pay off; they are all incredibly amazed and proud of how far they have come together. They want to win this without a doubt.

Mel B says that was just incredible, they were thrilling and she has so much respect for their dedication and it was on fire. Heidi says that was a jaw dropping performance. Howard says that without a doubt they have a very good shot at the million, they surely do belong here. Howie says they have the whole package and would pay to see their show.

Next up is Emily West, she knew for years now that music has been her passion and becoming a singer is the only thing she has ever wanted; she can’t see herself doing anything else with her life. Singing is her biggest passion and this is her chance to live her dreams.

Heidi says that her voice is so beautiful and wishes her so much luck, Mel B says that was off the chain and says if that doens’t win her a million dollars than she doesn’t know what can. Howie says that this risk was amazing and that it will pay off without a doubt, she is amazing. Howard says that she is a real singer, though she has the whole package of a star and that was surely a million dollar song.