Angelina Jolie And Brad Pitt’s Son Maddox Attempts To Claw His Way Out Of The A-List Family – Wants To Return To Cambodia! 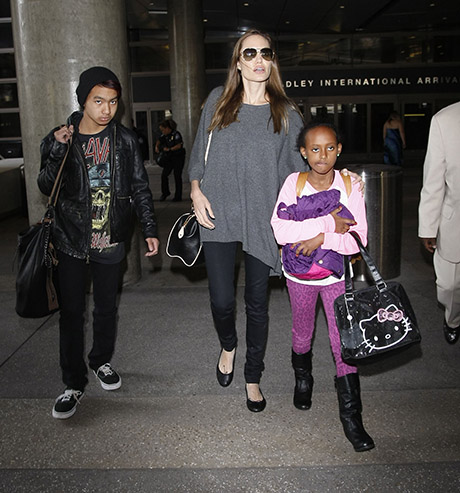 According to some recent report, Angelina Jolie is fearing that she might be losing her 12-year-old son Maddox, who’s allegedly desperate to return to his home country of Cambodia. The story comes from OK! magazine and sources claim that the kid is “rebelling against his famous parents.” Whether he actually is rebelling or not, well, we might never truly know — but I think we should all prepare for more and more stories about the “rebellious natures” of Brangelina’s A-list children.

Angelina has supposedly “become worried because he’s talking a lot about traveling to Cambodia.” He was adopted from there when he was just a baby. According to the claims, “He spends hours on the Internet in an attempt to trace relatives. He says it’s his dream to be reunited with his real family.”

So what are Brad’s thoughts on this matter? Is he freaking out that he might lose his child? Doesn’t seem that way. He’s supposedly trying to comfort Angie during this process, saying that this kind of behavior and curiosity is completely normal for a boy in his circumstance — it’s not a bad thing that he wants to explore his roots. It seems that he’s under the persuasion that it’s perfectly normal for an adoptive child to wonder about his or her beginnings, and we tend to agree.

What do you make of this story? Believe it or not? Let us know in the comments section below!