Angelina Jolie Hooking Up With Billy Bob Thornton But Not Cheating On Brad Pitt – They Have An Open Relationship! 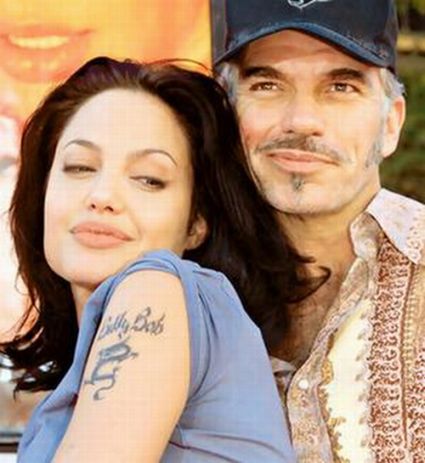 Rumors have been floating around for years that Angelina Jolie has been cheating on her baby-daddy Brad Pitt with her ex husband Billy Bob Thornton. Billy and Angelina were an iconic early 2000’s couple, and they were together for nearly three years. Sure, Angelina and Brad have kids together and look great on the red carpet together. But, there was an almost creepy passion between Billy and Angelina that we never really seen between her and Brad. Look at it this way – have you ever seen Angelina wearing vials of Brad’s blood on a necklace.

Fans of the celebrities have begun to speculate if Brad and Angelina are just another famous couple with an open relationship – there are many and the list has been alleged to include Will Smith and Jada Pinkett, Beyonce and Jay-Z, and of course Gwyneth Paltrow and Chris Martin, to name a few. Angelina and Brad have six children and are less than a year away from their ten year anniversary, however they are still not married. It’s beginning to look like Brad and Angelina are intentionally not getting married- so they don’t have to fully commit to each other and can continue seeing other people.

And, the fact that Billy Bob Thornton is still boasting to the media that he and Angelina are still in contact, and not trying to hide it supports the idea that Angelina is still very much involved with her ex and Brad is okay with it. In an interview with FOX News Thornton was asked if he still spoke to Angelina and this is what he had to say, “Is he in touch with Angelina? “Oh of course, yeah. She’s amazing, amazing. She’s got so much energy and so much goodness in her, and we check in on each other all the time. She makes sure I’m doing okay. I make sure she’s doing okay.”

So, is Angelina still hooking up with her ex love Billy Bob Thornton? Probably. But, is she cheating on Brad Pitt? No, because technically they have an “open relationship,” and aren’t officially married. What do you think about Angelina and Brad’s open relationship? Which man do you think she belongs with, Billy Bob or Brad Pitt – maybe someone else? Let us know what you think in the comment section below!