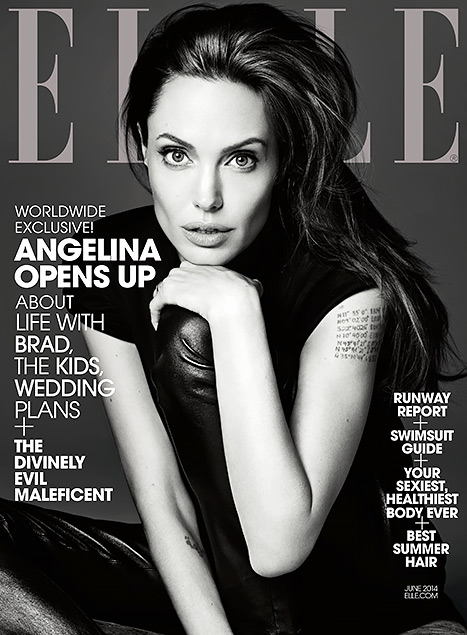 In a recent, enlightening interview with Elle, Angelina Jolie opens up about everything — from what she thought it be like to fall in love (or not fall in love) to her children to working in an industry that can be so demanding, especially while trying to raise a family. She’s been doing a lot of interviewing lately, primarily to generate some buzz for her new movie, Maleficent, which will be interesting given the fact that one of her children plays a primarily role in the story.

When talking about Vivienne, who plays the Young Aurora, she says, “We call her my shadow, because there’s nothing I can do to shake her. I can be tired, I can be grumpy, I can be in a terrible mood, and she doesn’t care. It’s ‘Mommy, Mommy,’ and she’ll cling to me. We knew that she would still do that thing, she’d still smile at me and insist that I pick her up. So we couldn’t really cast anybody else.”

She then goes on to say what she’s said countless times before: Brad and her will not make their children child stars. If and when they decide to venture into the industry, it will be of their own accord.

“Brad and I made the decision that we wouldn’t keep them from sets and the fun of making movies, but we wouldn’t [glorify it either] — we wouldn’t make it a good thing or a bad thing. But I would really prefer they do something else.” She then says the experience was very stressful working with such a young child, and throws a bit of shade upon her daughter. “After two days of it, Brad and I were so stressed we never wanted to do it again.”

Well it’s a good thing you found and fell in love with Brad Pitt, Angie! If you want to read the full interview, be sure to pick up your copy of the new issue.