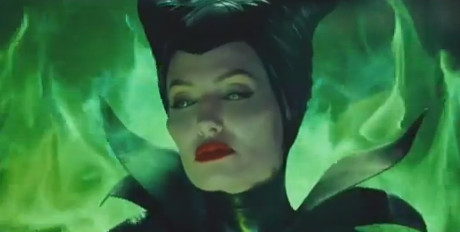 Reboots/reinterpretations of Disney classics can sometimes be hit or miss, but with Angelina Jolie‘s Maleficent, due out in theaters May 30th, we’re expecting a dark new tale we can sink our teeth into. Angie, 38, dons the horns so characteristic of Disney’s iconic villain and will make it her mission to take over the kingdom, which has, in some way, wronged her. Maleficent won’t be told from the perspective of Princess Aurora but rather from the viewpoint of the evil sorceress — who’s out for revenge.

Many people think of villains as characters who only stand in the hero/heroine’s way; however, the best villains always have a story of their own, one that hopefully explains how and why they’ve arrived at their current motivations. This movie promises to explore the events and moments that transformed Maleficent into the dark witch, one ready to do whatever it takes to assert her power over the kingdom.

The movie also stars Sharlto Copley, Elle Fanning, Sam Riley, Imelda Staunton, Juno Temple, and Lesley Manville. Take a look at the sneak peek preview below and let us know what you think of the trailer, as well as Angie in her dark, slightly terrifying, new role! The movie’s directed by Robert Stromberg.

The Sleeping Beauty tale “explains how and why Maleficent turned so evil that led her to curse the infant Princess Aurora. This is the story of how a once-good fairy became the “Mistress of All Evil.”