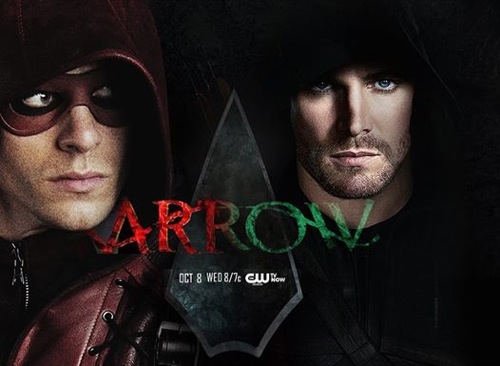 Tonight on the CW ARROW returns with an all new Wednesday, October 8, season 3 premiere episode called “The Calm.” Season 3 begins with a new villain, Vertigo, emerging, just as Oliver [Stephen Amell] tries to balance his life and ask out Felicity. Meanwhile, Diggle becomes a father; Lance is promoted to captain; Laurel joins Arrow’s inner circle; and Felicity gets a part-time job at a tech store to make ends meet.

On tonight’s episode, with crime in Starling City at an all-time low thanks to the Arrow (Stephen Amell) and his team, Oliver thinks he can finally balance being both the Arrow and Oliver Queen and asks Felicity (Emily Bett Rickards) out on a date. However, when a new villain (guest star Peter Stormare) emerges, who has claimed the name Vertigo from the recently deceased Count, Oliver is caught off-guard and someone close to him is hurt. Oliver and a newly suited up Roy (Colton Haynes) take on the Count. Meanwhile, Diggle (David Ramsey) becomes a father, Lance (Paul Blackthorne) is promoted to Captain, Laurel (Katie Cassidy) joins Arrow’s inner circle and Felicity gets a part-time job at a tech store to make ends meet. Also, Oliver fights to regain his company

Despite Team Arrow’s best efforts at cleaning up the city – the city itself is dying. All the major new channels are writing Starling City off after not one but two major terrorist attacks in as many years. So although the crime rate is at the lowest it’s ever been – a lot of residents have simply given up!

Team Arrow on the other hand remains optimistic. After all Diggle is going to be a father soon. And he already knows he’s having a daughter. Oliver had made a necklace for her that she could wear when she’s born and its simple necklace with a star pendant. The star is symbolic for Starling and even though the baby will probably never find out about her dad’s involvement in saving the city – Oliver didn’t want to Diggle to forget.

But the city is facing new dangers everyday and soon what Oliver and the guys did won’t matter much. There’s a new mob boss in town and he’s gotten his hands on certain hallucinogenic drug. Now usually someone like this guy would hold onto their most dangerous weapon however this new Count of Vertigo received some disturbing news that hastened his plans.

The police force have disbanded their vigilante hunting unit. Which means Lance and his men won’t find themselves stretching too thin trying to catch way too many people. Their sole focus will be on hunting guys like the Count. And with the police and the Arrow working together – certain people have decided to send a message in order to show their discontent with this new arrangement. They were going to target the Arrow!

And, sadly, these plans were made at the same time Oliver finally decided to let his guard down with Felicity. He had asked her out on a date. Earlier Felicity had been doing her best to teach Oliver about becoming the next captain of industry and the later part wasn’t going so well. Oliver kept on focusing on his Arrow job instead of thinking about the future of Queen Industries. So Diggle had told him to relax and advised him to have fun with Felicity.

Regrettably the date did not turn out well. The legendary date we had all been waiting for was a bust. The Count had managed to find a way to target the Arrow and fired a missile at the restaurant the couple were dining at. Afterwards, both Felicity and Oliver were physically fine but Oliver isn’t going to let his guard down again anytime soon.

The fact Felicity nearly died yet again because of him also means he’s not going to be quick with that follow up date. Hence it was back to business for them and Oliver wanted to strike a blow against the new count. Unfortunately, he used Laurel’s father for help and Lance was injured in the process.

Laurel later made her father promise to take is easy. He’s had way too many close calls in the hospital recently and truly she just wants him to be her father. He doesn’t have to roam the streets in order to be her hero.

But this latest incident with Lance had made Diggle aware of a few things. Like there’s a pattern going on here with Oliver. Lately Oliver doesn’t want to use him on missions. Even (often out desperation) turning to Roy or Lance rather than using him. And so Diggle wanted to know why. Why were missions suddenly too dangerous for him? Oliver’s response was that he would prefer it if his friend stayed behind in safety with Felicity.

Oliver knows what kind of risks he takes everyday – he wants something more for an expectant father. Anyways it’s not like Oliver is planning on settling down and having kids. Yet why did have to say that part in front of Felicity?!?!

As for the company meeting he went to soon after the explosion at the restaurant – he wasn’t as prepared as he thought. The meeting was his final chance at winning back the company and he really didn’t put his focus into it. He tried to reach the board members with his heartfelt speech about wanting to save the company and his adversary Ray Palmer was able to do a better job at buying the company from out underneath him by relaying some hard cold facts about raising revenue. So Oliver lost the company and because of his own misconstrued ideas – he’s going to lose the girl. The comment about not having a future was directed at her.

When Diggle Lyla had their baby – it should have been a joyous occasion but Oliver took time to “talk” with Felicity. And she didn’t need to hear the words so she ended things herself.

The new count of Vertigo was eventually taken down. And surprisingly an old face showed up at just the right time to lend assistance. Sara had come back because of some mission or another. Though she told her sister she wanted some time before she told her dad she was back.

But she never got the chance to talk him. Someone came after her before she could. Sara Lance was killed by someone shooting arrows at her meaning this person also wanted to set up Oliver for her death!

Yet she knew this person and even greeted them prior to her death. So who could it be? Who Killed Sara Lance for the final time?