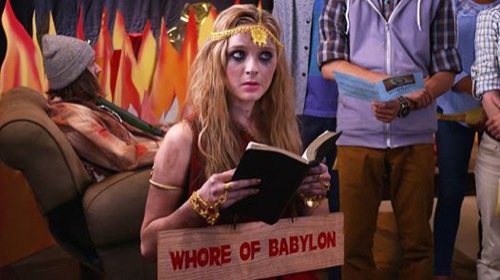 Tonight on MTV their comedy series AWKWARD about an under-the-radar teen returns with an all new Tuesday October 14, season 4 episode 15 called, “Bonfire of Vanities.” On tonight’s a secret document is uncovered by Jenna [Ashley Rickards] and Tamara [Jillian Rose Reed].

If you have never watched the show before “Awkward” is about the specific incidents in our formative years that define us -sometimes for the best and sometimes for the worst. The show centers around fifteen-year-old Jenna Hamilton, who, like many, feels invisible to her peers and desperately wants to find her place–which is hard to do in a day and age where fitting in means standing out.

On the last episode, Lissa attempted to convince her father to do the right thing and tell her mom the truth. Meanwhile, Jenna and Tamara learned whether they have been accepted into the same college.

On tonight’s episode things get crazy at the senior bonfire; Jenna and Tamara announce the boys’ girl-rating tradition.

Jenna and Owen had sex. And it’s more than just sex to her. She’s interested in him and his age and status as a sophomore has her kind of freaked out. However nothing could have prepared her for the fact she technically took his virginity without knowing it. Something like that tends to put a downer on a daydreams of them possibly working out!

Meanwhile back at school, Tamara was gearing up for the Seniors’ bonfire when she found out about secret grading score of hers. Someone had called Allentown and she didn’t know what it meant until Sadie had explained. Sadie said her score must be similar to the zip code of Allentown.

Guys at their school have been grading girls they’ve dated and apparently everyone could find out their score in the Phone Book. Tamara wants to see it and so far the guys she’s been asking have been uncooperative. Including Owen.

Hence Tamara decided to hunt for the book with only Jenna acting as her backup. And surprisingly they found the book with ease. Guys had actually put something called a phone book in the real phone book section at the library.

And while Tamara is Allentown, Jenna was a St. Louis. Someone had low scored her and because she knew the handwriting – she knew it was Matty behind her “score”. So she confronted him. She asked why he never said a word about it. Back then, when they were dating, or even now that they’re supposed to be friends. Yet he didn’t get it and that’s why he tried to shake it off as no big deal.

Jenna called him a jerk and due to poor timing – the girl Matty was interested ended up catching the whole exchange. Thus she cancelled their date for later that day and basically told him not to try for a second chance with her.

Jenna was furious with Matty and what she needed the most was to hang out with Owen. But she couldn’t do that seeing as he was her secret. Plus when she almost come clean – Tamara had made a joke about dating him and being on a one way to track to desperate cougar.

Later at the bonfire, Tamara had gotten some revenge on behalf of the female student body. She set up a dude database where the girls can now rate the guys. And sadly Jenna didn’t find out about until after Matty realized he had made a mistake.

He made a public apology in front of everyone and that managed to earn him back some brownie points with both Jenna and Gabby. Though he’s not going to like being called a man whore on the dude database. And someone else who might take offence at that would be Gaby. She changed her mind about Matty because she thought he had changed. That all ugly and past behavior was really in the past. So how is she going to feel once she learns he’s been rated as a whore?

As for Jenna, she broke up with Owen and it wasn’t because of what Tamara said or how people would react. She came to the conclusion that he deserved a real relationship with someone that wasn’t going to be leaving for college in the next couple of months.

That’s why she regretted taking his virginity. She was only looking for a little bit of fun and he’s going to need more from someone that that!

But now that the database is blowing up – no relationship is safe! Not even the weird ones like what Sadie has got going on with her own personal punching bag!