BY Stormy Elizabeth on May 6, 2014 | Comments: one comment
Related : Reality TV, Recap, Television 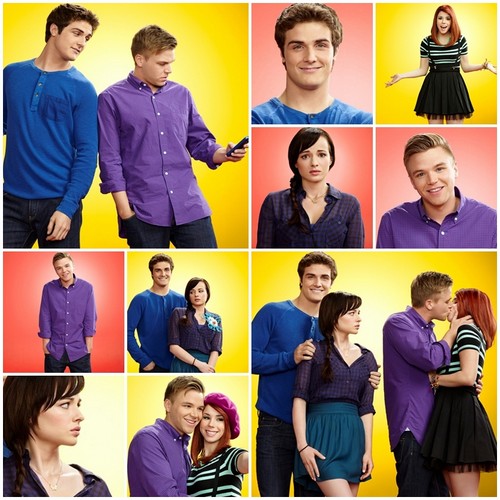 Tonight on MTV their comedy series about an under-the-radar teen air with a new episode called, “Sophmore Sluts.”  On tonight’s episode, “Sophomore Sluts,” pits the seniors against the sophomores for Spirit Week and Jenna against two blondes for Matty’s attention.

Last time on Awkward, Jenna and Matty tried to be friends with benefits after he trusts her with the news that he’s adopted. But once it becomes clear that the only thing he wants to share with her is his naked body (great as it is), Jenna is disappointed – especially when she finds Eva at his house. And there was plenty of bestie drama too with the break up of Tamara and Jake.

On tonight’s episode, Sophomore Sluts, the seniors stress that they won’t win Spirit Week for the first time ever and not one, but two younger girls are all over Matty making Jenna jealous and bringing her insecurities to the surface. What will happen when the seniors have to turn up the heat to win Spirit Week? Will Tamara be able to hold it together? Will Jenna get more of Matty or are they done for good?

Jenna wakes and realizes she overslept. As she dresses, she stresses over whether Matty and Eva are hooking up and why she was at his house. Tamara calls and Jenna says she’s sorry she’s running late and then she does a mini rant about Eva. Turns out it is Eva on Tamara’s phone saying Tamara wants her to bring a coffee and a cronut.

Jenna shows up the with the caffeine and food and Tamara tells her to get over Matty and who he may be hooking up with. Tamara gets a call on her second phone she got for “Autumn” to use – her online personality she’s catfishing Jake with. She tells Jenna to help with the spirit committee and Tamara is freaking because they may lose Spirit Week.

Tamara calls them sluts and Valeria comes up and says they will have no slut shaming. She tells the girls to call them slags or slappers because those are British terms. Jenna tells Val she likes her hair extensions but tells her she’s not sure what they mean. Val says she’s the future.

Lissa sorts pom poms when Sadie shames her and says it’s Jenna’s job. Lissa says she likes doing it. Sadie tells her she’s been reading the bible and tells Lissa she’s not sure if cheering is was Jesus would want Lissa to do. Lissa says she thinks both Mary and Jesus would have been cheerleaders. Sadie says that some people have been saying the power of being captain is going to Lissa’s head but Sadie says she doesn’t think so. Lissa looks confused.

The first competition of Spirit Week starts. It’s time for chubby bunny. Each class gets a rep to put marshmallows in their mouth and says chubby bunny. Matty is the reigning champ but Kyle asks if he can do it since he doesn’t get sugar at home. Matty tells him to go for it. Kyle is eating them and the freshman candidate says he’s a diabetic. It’s turning into a disaster. The sophomore slut that’s up there is having no problem shoving the sugary treats into her mouth. Tamara has to call it a victory for the sophomores and two guys rant over McKenzie’s performance.

The sophomores have done up a jungle theme and the hotties are dancing in leopard bikinis. Val says it’s glorious and says the sophomores win hallway and that the seniors may lose Spirit Week for the first time in recorded history. The girl seniors watch outraged as the sophomores twerk in tandem while Matty and Jake ogle openly.

The sophomores are winning everything and the senior girls are all on time for the powder puff practice. Lissa is teaching the guys some cheers but Matty didn’t show up. Sadie says the cheer seems violent and asks Lissa WWJC – what would Jesus cheer.

Tamara is late because she was up late catfishing Jake. He tells her his ex was controlling and just okay looking. Then he says she was crazy. She freaks out. She asks Jenna if she’s crazy and she tells her that it’s Jake that’s crazy. Tamara is beat so Jenna says she’ll coach Powder Puff. She tells the girls practice is postponed until tomorrow. Sadie says Jenna is a loser and can’t teach them anything. Eva says she can help out because she’s been tutored by a Yale football player. Jenna leaves determined to learn everything about football by tomorrow.

Matty comes to talk to his mom and he tells her to be honest. She says after the divorce, her finances changed. She says she was disappointed to find a dent in his car and that he kept it from her. He thought she was going to bring up his adoption. He tells her that if he ever found out she or his dad was keeping something from him, he’d be super disappointed too. He walks off irritated.

Jenna comes to her dad and asks him to teach her some football plays. He says he thought this day would never come and takes her out into the yard to toss the ball and plot strategy. He asks why she needs to win so badly. She says it’s senior pride and the sophomores. Her mom and Ally shout out “the sophomore sluts” and tell her they’ve been around since the beginning of time.

Ally was an original sophomore slut. She shows Jenna her tramp stamp and says she gave the lower back tattoo that name. They say the guys were eating up the sophomore skankiness and Kevin says you can’t blame it on the guys. He says senior girls are too stressful and they just want easy.

Jake and the sophomores come up to Matty at the mall and ask him to eat fro yo. He says he’s leaving his job for good. He’s sick of it. He puts on his hoodie and his manager threatens him. Matty flips him off. McKenzie puts her arm around Matty and says she loves a bad ass with a good ass. They head out.

Val is dressed as a nerd when Lissa comes in wearing a toga. She says she thought it was Greek, not geek day. She tells Val she doesn’t want to be cheer captain anymore but Lissa can’t answer. Sadie comes in and pushes the agenda. Val says she needs an injury to get out of it and offers to hit her with the tape dispenser. Lissa freaks and runs out and Val tells Sadie that was a teachable moment.

It’s time for the Powder Puff game. The sophomore girls come in half naked and then Kyle tells them the senior guys aren’t cheering because Jake and Matty aren’t. Tamara comes over and demands they get up and cheer and Jake tells her she has crazy eyes. She says it’s the least you can do. Jake says the least they can do is go cheer for the sophomore girls. He and Matty walk to the other bleachers.

Jenna says as long as the sluts exist, they will never win. Sadie says that was the worst speech and tells the girls they need to go out there and kick those sluts asses. One of the girls pulls Jenna’s hair and she snaps. She says those girls were not the problem – it was Matty. Eva comes over and yanks out the girl’s extension. It turns into a sophomore-senior girl on girl brawl. Val blows her whistle to try and stop it.

Jenna sits dejected in the locker room. Jenna says the seniors lost Spirit Week for the first time ever. Eva comes in and Jenna thanks her for having her back. Eva says she didn’t know she had dated Matty before or she would have let her in. Jenna says she’s sorry too and Eva says chicks before dicks.

Matty puts his truck in gear and dances outside of it. Jake is filming and they’re laughing but then it gets away from him. The guys chase after it, but it’s too late. The sophomore girls cheer as Matty’s truck meets its doom and the guys curse.