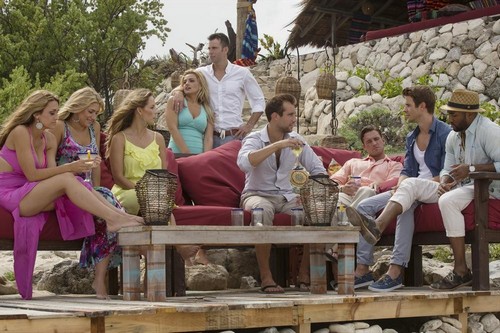 Bachelor in Paradise premieres tonight on ABC and in this evening’s episode former contenders from “The Bachelor” and “The Bachelorette” get a second chance at love as they explore new relationships in an isolated Mexican locale.

For those of you not familiar with the show, this summer, 25 of “The Bachelor’s” biggest stars and most controversial contestants are back looking for a second chance at love on “Bachelor in Paradise.” They all left “The Bachelor” or “The Bachelorette” with broken hearts, but now they are back to find their soul mates. “Bachelor in Paradise” begins with 14 former cast members, eight women and six men, who travel to beautiful Tulum, Mexico hoping to turn a potential summer fling into the real thing. However, in true “Bachelor” fashion, there is always a surprise.

On tonight’s episode looking for love a second time around, the “Bachelor in Paradise” cast arrives in gorgeous Tulum, Mexico ready to mingle. Welcomed by Chris Harrison, they quickly get to know each other at a Bachelor-style arrival party located on the beautiful white sandy beach of their private oasis. Shortly after the party gets going, Chris Harrison interrupts to explain the rules of paradise, including one shocking detail – at the end of each week, anyone who is not in a romantic relationship will be sent home — this week the men will hand out a rose to someone they’d like to spend more time getting to know. The women who do not receive roses will leave paradise forever. With that, the anxiety amongst the women immediately intensifies as they begin to evaluate the eligible men. Lacy is the first to make a move by taking Robert for a steamy dip in the ocean, only later to be canoodling with Marcus.

When Ben arrives, no one is happy to see him, and nobody greets him. Finally Lacy Faddoul offers him a drink. Marcus knows that Ben is a “bad boy” and he doubts he is there for the right reasons. Next Michelle Kujawa arrives, and her greeting isn’t exactly warm either. Robert (from Desiree’s season of The Bachelorette) arrives next, followed by Dylan Pettit from Andi’s season of The Bachelorette. Elise Mosca (Juan Pablo’s season of The Bachelor) is the next girl to arrive. Elise barely says hello to everyone before she is convinced that she is in love with Dylan. Ashlee Frazier is the last girl to arrive, and is thrilled to see Graham since she joined the show just to meet him.

Once all of the Bachelor and Bachelorette alums have arrived, Chris Harrison joins them and explains to them that since there are more women than men, one of the women will be heading home after the rose ceremony. After Chris Harrison breaks the news, they all head to the house where they will be staying. Lacy grabs Robert right away and they head out to the ocean and she wraps her legs around him. All the other girls are shocked by how aggressive she is being. Later everyone sits down for dinner and Marcus heads out swim in the ocean by himself, he still isn’t over Andi Dorfman, and isn’t ready to party with everyone else.

When Lacy sees Marcus in the water, she runs out to join him. Sarah Herron thinks that Lacy is being trashy going in to the ocean with more than two guys in one night. Robert jokes that Marcus is stealing his girl. After Lacy is done swimming with Marcus, Robert steals her back and they sit on the beach together. Meanwhile Clare and Marcus sit on the beach and watch Elise and Dylan make out in the ocean.

Day 2 arrives and AshLee scores some quality time with Graham and they head down to the beach. She confesses to him that the only reason she cam was so that she will see him, and he is shocked since they never met before. The first date card arrives and it is for Clare. She runs down to the beach and invites Clare to go to the ruins with her. Graham accepts her invitation and says he is “pumped.” AshLee bursts into tears and runs upstairs crying, devastated that Graham accepted Clare’s invitation. Sarah and Daniella think that AshLee is certifiably crazy because she is so upset over Graham and hasn’t even known him for 24 hours. Clare heads outside when she sees AshLee crying and sits outside and cries to herself and talks to a raccoon.

Clare heads back to the house and sits down with AshLee and asks her why she is so upset. Clare insists that she had no idea AshLee liked Graham and offers to take someone else to the ruins on the date. Clare heads outside and tells Graham that she can’t take him and then invites Rob on the date with her instead.

Clare and Rob head to the Mayan Ruins, and begin trying to scale the wall. Graham walks through a fire ants’ nest and is covered in hundreds of ants. After he strips his shirt off they head up to the top and take pictures of themselves standing on the cliffs. Afterwards they head down to the beach and decide to go for a dip in the ocean.

Later that night Lacy has a meltdown because both of the guys she is interested in have been spending time with other girls. She heads down to the beach with Rob, and he reassures her that while he was on a date with Clare he didn’t even kiss her and he is still interested in Lacy. While they are on the beach the rest of the house is shocked when a new houseguest arrives, Michelle Money. Daniella is automatically upset because she realizes that two women are going to go home instead of one. Michelle announces that she has a date card, and then says that she needs to talk to Graham in private.

Michelle and Graham head down to the beach, to discuss what happened between them on Bachelor Pad. They do their secret handshake and spend some time getting reacquainted with each other. The next morning Michelle contemplates who she will take on a date with her. AshLee heads to the beach to talk to Graham, she knows that if he doesn’t give her a rose, none of the other guys will.

Michelle Money takes her date card down to the beach and asks Marquel to join her. He happily accepts. They head out on their date and are surprised with horseback riding on the beach. Marquel has never ridden on a horse before, and is off to a bumpy start. After a while they take a break and go for a dip in the ocean together.

Back at the house Lacy receives a date card, but she has no idea who she is going to take. Marcus already went on a date with Sarah and Rob already went on a date with Clare. After some thinking she decides to take Robert, and they head out to the beach for a romantic dinner. Marcus watches them leave and is disappointed that Lacy didn’t choose him. Dylan gives Marcus a pep talk and tells him that he might want to give up on Lacy because she is clearly in to Rob. Dylan thinks that Marcus should “play hard to get” with Lacy. Meanwhile Lacy is in the ocean making out with Robert.

Now it is time for the first Bachelor in Paradise rose ceremony. All the guys and girls head to the pre-cocktail party. There are eight women and only six guys, the guys will be handing out roses, and the two women who don’t receive on will be headed home. Clare, Daniella, Michelle, and Sarah begin scrambling to try and secure roses.