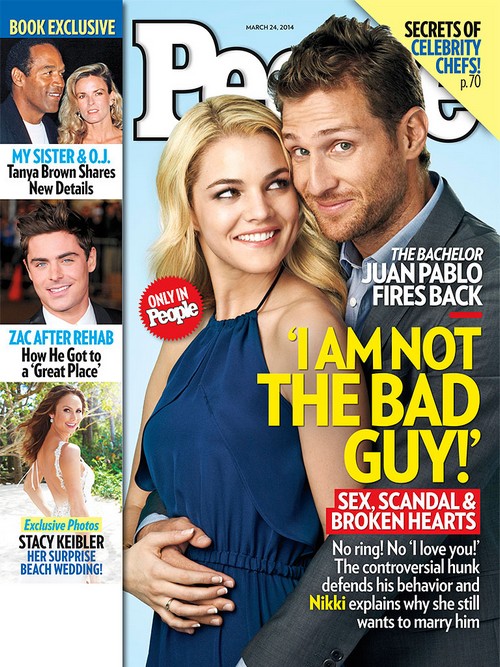 Nikki Ferrell went into this season of The Bachelor with her eyes on that prize. She didn’t care who she stepped on or disrespected as long as she ended up with that final rose. It seemed like most of the fans were pulling for Juan Pablo to pick anyone but her, at least until this week. Now I have to wonder if he picked the right girl after all. I mean this clown presented her with the final rose by telling her that he “really, really” likes her. If you tuned in for the After The Final Rose special then you saw exactly the kind of douche lord that Juan Pablo really is. He absolutely refused to say that he loved Nikki and that might be a good thing. I can’t imagine that at this point Nikki would want him to say those words. Surely she has to see through him just like the rest of America does, right?

According to the March 24th print edition of People Magazine Juan Pablo feels absolutely no need to propose to Nikki and no real desire to do any other publicity aside from this one interview. His shallow justifications can’t even begin to hide what has slowly but surely emerged as his true motive for doing the show in the first place. It was all about the money and exposure. His has said, the shows over onto the next thing which only further indicates that this was a job rather than a true attempt at finding love.

As for Nikki, she claims that if Juan Pablo had proposed she would have accepted but for now she’s fine just being his girlfriend. How long do you think it’ll be before she comes out and publicly bashes him just like everyone else has? Tell us your thoughts in the comments below!