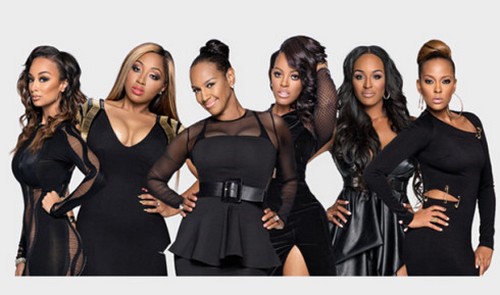 Tonight on VH1 BASKETBALL WIVES OF LA returns with its season 3 premiere and on tonight’s episode, Jackie invites some of the ladies to plan an event, but catty drama swells when new cast members get to know one another.

If you have never watched the show before VH1’s “Basketball Wives LA” follows the lives of a group of women with relationships to some of the biggest basketball players in the game. For two seasons, fans have come to love this high energy, passion-filled series and its dynamic cast members. This season,the show welcomes newbies Sundy Carter, Brittish Williams and Brandi Maxiell to join the notorious team of wives and is sure to cause a commotion among the returning cast members Jackie Christie, Malaysia Pargo and Draya Michele.

On tonight’s episode it begins with a surprising revelation. An ongoing love triangle with one of the cast members is exposed and causes major turmoil in the group and the three new ladies are forced to take sides.  Jackie invites some ladies of the league to meet and plan an event, but as the new girls get to know each other, the claws come out, and when the focus turns to Draya, it all goes left.

Tonight’s episode is going to be filled with the usual Basketball Wives of LA drama and you won’t want to miss it, so be sure to tune in for our live coverage of the show tonight at 8 PM EST! While you wait for our recap hit the comments and let us know how excited you are about the new season of  “Basketball Wives of LA”  Also we have a sneak peek video of tonight’s show below!

In the season 3 opener, the LA ladies return, and they’ve brought back the drama from season 2. Tonight, Jackie invites some of the ladies to plan an event, but catty drama swells when new cast members get to know one another. Three new women join tonight! Brittish Williams, Sundy Carter, and Brandi Maxiell join the cast we’ve come to know and love (maybe!), Draya Michele, Malaysia Pargo, and Jackie Christie.

Tonight’s episode starts with Malaysia comes to visit Draya for some girl talk. Draya gives the update on her man, Orlando Scandrick, a Dallas Cowboys football player. She really wants to get serious, especially now that the kids have grown close as well. She seems a little insecure though, adding that now it would be harder to break up because they’d break the kids up too. Hmm…maybe something to hold over her boyfriend should he decide to move on? Draya confirms her insecurities moments later when she tells Malaysia she doesn’t trust Orlando on the road when she is not with him. She joked that she is so insecure that she would ask for a pic of him alone sleeping after he tells her he’s in for the night. Wow. That will have your man running for the hills! Malaysia shares her secret for road-trip success. She says she is confident enough that when her man is on the road, she knows that he is lucky to have her and she doesn’t worry about him cheating…later adding…but if hedid, he better not let me catch him!

Doug and Christie talk about Chantal and Takari and their improved relationship with mom Jackie. Jackie is happy they are making progress. Jackie moves on to talking about an event she wants to plan with the involvement of GLAAD. The couple has long been activists for the gay and lesbian community and Jackie wants to put together a special event. She enlists Doug to get some of his friends to come and she is happy to have Draya, who is openly bisexual, be a big part of the event. She arranges a tea to talk to them about it.

Brittish is a new friend of Jackie’s. They met in a club and the two get along well. Brittish is engaged to Lorenzo Gordon. She and Jackie talk about her engagement and the fact that she is fine with Lorenzo still messing around behind her back as long as she doesn’t know. After getting pressed on why she’d put up with that, she gets defensive. If only she put as much time into gaining some self-respect as she did playing with her extensions, she’d be a lot better off.

Draya and Jackie have a nice talk after yoga. Jackie tells Draya her plan for her upcoming fundraiser. At the beach, Malaysia and family hang out with Brandi and Jason Maxiell. Malaysia considers Brandi a very close friend because they are alike and live the same lifestyle. Brandi really wants to stay in LA longer because there is a doctor that she likes in LA that she thinks will be helpful to her as she tries to get pregnant. She has had difficulty as she’s battled cancer previously.

Sundy, Jackie’s friend confides in her about her crazy personal life. Sundy’s daughter had run away and some disturbing pictures ended up online. Jackie offers her some advice, but later heads home to greet Brandi so that she can get to know her better. Brandi gets in detail with Jackie about her battle with cancer.

Brittish talks with her fiancé Lorenzo for a bit at home and shares that he’s about to go overseas alone for the first time without her. Later, Ariane, the mother of DeShawn Stevenson’s kids stops by Jackie’s to talk. Jackie hopes to enlist her help for her fundraiser as well.

Jackie gets all the girls together for drinks since many of them have not met yet. She opens with information about her No Hate campaign. The conversation quickly turns into the ladies questioning Ariane about her sexuality after she pushes Draya for more personal details about her sexuality. Ariane, who Jackie thought was not too into helping the LGBT community all of a sudden has admitted to enjoying some experimenting with women, labeling herself bi-curious. The girls call her on it, but Brittish tries to step in and help out her new friend. Too bad it is hard to focus on anything Brittish is saying with her horrible color job. Seriously, she looked like a spotted cheetah.

The conversation takes another dark turn and Brittish feels like Brandi is being disrespectful to her. Brandi takes it up a notch and turns to Sundy to ask about her relationship with her daughter because she’s been seeing a lot of things about her online. The ladies all believe this topic is off limits and Sundy is clearly uncomfortable. Brittish tries calling Brandi out for bringing the daughter up. Brandi counters with the stinging “you don’t have kids so you don’t get it.” Brandi swears her intentions were not bad, and that she just wanted to get to know her new friends better. As the conversation shifts, it is finally made clear why Draya keeps looking sideways at Ariane. Apparently, Draya and DeShawn had a thing going and Ariane isn’t too happy about it. Ariane discloses that Draya went on Wendy Williams saying that she and DeShawn had a full-blown relationship 6 years ago. Problem….Ariane was with him at the time. Draya takes a “who cares’ attitude and basically tells Ariane that she needs to get over it.

Brittish looks uncomfortable with the girls, but boldly calls Draya on her promiscuity. The girls go on the attack and make it clear, Brittish and Ariane may be too weak to make it with this group of ladies.