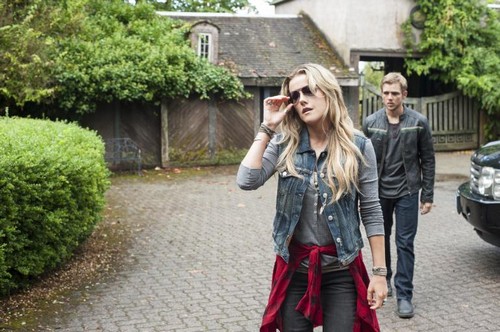 Bates Motel returns to A&E tonight with a brand new episode for fans to enjoy.  In “The Escape Artist,”  Dylan takes control of a volatile situation; Norma and Norman’s relationship is threatened; and Emma finds herself in a dangerous situation.

On tonight’s episode Dylan is asked to manage an explosive situation; Norma and Norman’s relationship is threatened by a growing secret; Emma lands in a dangerous situation.

Tonight’s episode is going to be a great one and you’re not going to want to miss it. Tune in to A&E at 10PM EST to watch it and we’ll also be recapping it right here.  In the meantime stop by our comments section and tell us your thoughts on the second season of BATES MOTEL!

Tonight’s episode of Bates Motel begins with Norma reading the newspaper, Lee Berman’s death is on the front page. She rushes out of the kitchen Norman comes in. She finds a beer bottle cap on the floor, and flips out on Norman for drinking. She says that he can’t take his driver’s license test this weekend if he is sneaking around and drinking. He reassures her he won’t drink again and it’s not that serious.

Zane’s sister picks Dylan up from the hospital and takes him to her secluded house out in the middle of nowhere. She shows Dylan to his room and reassures him that she has no intention of hurting him, she actually plans on keeping him safe.

Norma’s friend Christine pays her a visit at the motel and encourages her to go after Lee Berman’s seat on the board. She wants Norma to call the mayor and express interest in the seat, she’ll have George call her and prep her for the meeting with the mayor.

Dylan wakes up, and Zane’s sister brings him an herbal drink that she brewed herself with herbs from her garden. She tells him she is going to make dinner, and they can eat at 7:00 PM.

Emma is cleaning the motel rooms and Norman is outside, he says Cody is picking him up. Cody peels into the parking lot and Norman jumps in to the car. Norma kicks him out of the car and climbs in and tells Cody that Norman can’t drink because of “medical reasons” and tells her not to let him drink under any circumstances. She climbs out and allows Norman to get back in the car and leave with her. Cody clearly doesn’t take Norma’s warning into consideration, she heads straight to her house to steal a bottle of her Dad’s liquor so that they can drink. Her Dad comes home and Cody and Norman hide into the closet so that they aren’t caught. While in the closet Norman has flashbacks of a child and his mother locked in a closet while a man beats someone in the other room. Cody’s Dad leaves and she opens the closet door, Norman is in a trance though. He finally comes out of it and he tells Cody that he has been freezing like that a lot lately. She grabs the bottle of liquor and they leave the house.

Norman runs into Sheriff Romero outside of the motel. She tells him that she has a meeting with the mayor over Ben’s seat. Romero tells her not to get her hopes up, he doesn’t think she will get the seat, it’s all about politics. Before he leaves he warns her that he can see in her bedroom window at night.

Gunner and Norman swing off a clip with a rope and jump into the river. Emma tells Cody she wishes she could do it. Cody encourages her to take off her oxygen hose and try it. Gunner and Norman both warn her not to, but Cody reassures her that she can do it. Emma jumps into the water and goes into shock form the cold and can’t breathe without her oxygen tank, she nearly drowns. Gunner and Norman save her. Once she is out of danger Norman screams at Cody and tells her that she can’t just play with people like that and tells her if Emma died it would have been all her fault. Gunner tells Norman to relax.

George arrives at the motel to help Norman study local politics before her meeting tomorrow with the mayor.

Zane’s sister takes Dylan into an empty barn, they climb upstairs and she shows him her marijuana farm. She says that she regrets giving Remo a position, she wants Dylan to shadow him and “basically run things without letting him know that he is running things.”

Later that night while Dylan is sleeping, Zane’s sister sneaks into his room and tells him “don’t take this personally” and then has sex with him.

Emma takes Norman aside and thanks him for saving her at the river. He apologizes for freaking out, and she tells her it was to be expected because the whole situation was scary. She kisses him on the cheek and leaves.

Norma is in her room studying her cue cards for her meeting with the mayor. She mentions to Norman that George came by and helped her yesterday. Norman excuses himself, and reminds her that his driver’s test is in the morning.

Norma heads into her meeting with the mayor, the mayor mentions that Nick Ford really pushed for her to get the seat on the board. The mayor doesn’t even want to hear her speech that she has practiced the last two days, he tells her that he will be making his decision soon.

Cody shows up at the motel and apologizes to Emma for peer pressuring her into jumping into the river. Cody says she wants to talk to her about Norman, she asks Emma if he is all right. She tells Cody that Norman keeps “blacking out” and it is like he is sleep-walking. Cody thinks there may be something really wrong with him and he needs help.

Norma receives a phone call from the mayor’s secretary congratulating her, they have given her the seat on city council. She and Norman jump up and down and celebrate, and then she takes him to his driver’s test. While she is sitting on the bench waiting for Norman to take his test Emma calls her and tells her about Norman’s blackouts. Norma hangs up and rushes over to the car and tells the instructor that Norman has blackouts, the instructor climbs out of the car and tells Norman he can’t get his license. Norma drives Norman home and he is furious, and he grabs the wheel and steers the car off the road. He jumps out of the car and tells his Mom to go home, he isn’t a little boy anymore, and she can’t keep him locked up in the house forever.

Norman barges into Cody’s house and wants to know why she told Emma about his blackouts. He wakes up her Dad while he is screaming at her. Cody’s Dad punches Norman and begins choking Cody, Norman fights him off and pushes him down a flight of stairs. Cody’s Dad is dead and Norman murdered him.