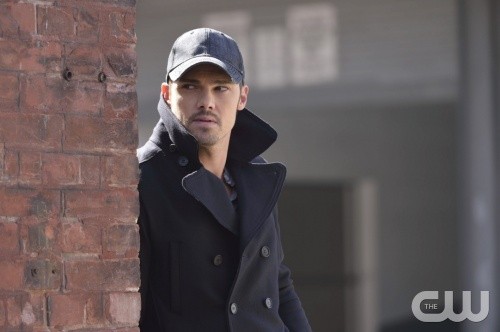 Tonight on the CW their hit fantasy drama BEAUTY AND THE BEAST airs with a new episode called, “Beast is the New Black.” On tonight’s episode Cat must clear Vincent’s name after he is arrested for murder.

On the last episode, in order to prevent Sam (guest star Tom Everett Scott) from destroying a large group of people, Cat (Kristin Kreuk) and Vincent (Jay Ryan) were forced to revisit a romantic destination from their past, which enabled them to come to a new realization about what they mean to one another. Nina Lisandrello and Austin Basis also star. Stuart Gillard directed the episode written by Melissa Glenn.

On tonight’s after Vincent (Jay Ryan) is arrested for murder, Cat (Kristin Kreuk) and the team must work together at all costs to clear Vincent’s name. When they discover who turned Vincent in, they realize they have a bigger enemy to handle. Sendhil Ramamurthy, Nina Lisandrello and Austin Basis also star. Fred Gerber directed the episode written by Sherri Cooper and Jennifer Levin.

Tonight’s episode looks like it is going to be great and you won’t want to miss it, so be sure to tune in for our live coverage of CW’s Beauty and The Beast at 9:00 PM EST! While you wait for our recap hit the comments and let us know how excited you about the show, so far! Also check out a sneak peek of tonight’s episode below!

Tonight’s episode begins where the series left off as Vincent is being led away after being arrested for the murder of Kurt Windsor. Catherine runs after the detectives begging them not to take Vincent. The detectives are unmoved and place Vincent in the police car. Just as they are getting ready to take off, Vincent tells Catherine that he needs the gem. Just as she yells to him about its whereabouts, the car takes off and she doesn’t get an answer. She runs back inside the house, dropping her badge in the snow in the process.

Cat gets in the car and calls JT immediately telling him about Vincent’s arrest and the part Gabe played in it. She tells him she needs to know where the gem is. He shares that he has no idea where it is. She tells him to think about where it could be as she heads to the station to try to intercept the lab work they do upon intake because the blood test would expose him. When Cat arrives and tries to gain access to intake, she realizes she doesn’t have her badge. The officer won’t let her in without it. She calls Tess, not realizing that she is at JT’s and was in bed with him when she called him earlier, and asks for her to come over to vouch for her.

Tess tries to wiggle her way out of the fact that she is not so close to the station (since she’s at JT’s) by saying she is at the gym. Cat counters that the gym is close as well and Tess responds that she changed gyms. Meanwhile, JT is talking to Gabe on the other phone and yelling about how he could do such a terrible thing to Vincent. He denies having anything to do with the arrest, but JT isn’t hearing anything he has to say. Tess says her trainer is yelling in the background when Cat inquires about the noise. Finally, Tess says she’s on her way and has JT drop her off a block away! Cat heads back into the station and is mistaken for a psyche patient. Lowen arrives just in time to help her get in.

Meanwhile, Vincent is going through the intake process. Cat gets into the locker area and find an officer’s uniform to get to intake. She makes it just in time as Vincent started to freak out just as they were ready to take his blood. She tells them she was sent because she is experienced in dealing with this kind of situation, so they let her sit with him as they draw his blood. She intercepts the saliva and blood tests by saying she’ll take them to the lab, and finds out that the gems are hidden in his brother’s tombstones. She meets with Gabe, JT, and Tess to ask for help and give them an update.

JT still has trouble believing Gabe and during a rant, blurts out that he and Tess slept together. Cat and Tess are digging snow off the gravestones looking for the gem. Tess tries her best to calm Cat’s fears but Cat tells her that there is so much at stake and with all the trials and depositions that will come, it may come out that Vincent killed Kurt. She is worried her love will get a life sentence. Gabe calls Cat and shares that they have pictures of Vincent carrying Kurt’s lifeless body. Cat begins to come up with several scenarios they could use in his defense. They all seem quite far-fetched, however. Gabe then tells Cat that they found Kurt’s heart in Vincent’s fridge. Cat is shocked. Cat thinks her dad had something to do with it in an effort to protect her. She thinks her dad paid someone off to frame Vincent. He claims innocence but tells Cat that he is happy that Vincent is finally where he belongs.

JT straps the gem to Vincent but he is worried about al the risks everyone is taking. He tells JT that when an investigation takes place they will all be in trouble for covering it up. He believes he needs to be responsible for what he’s done. Cat goes to see Vincent and tells him that her dad planted the evidence against him and that he needs to fight this or his dad will win. When he questions her feelings, she tells him they can make it through this. He worries she will resent him later for all he’s put her through. She tells him her plans and he tells her not to be involved in any cover up. She won’t budge.

Moments later, Vincent intentionally picks a fight with another inmate. He needs a transport to the hospital. Vincent uses that ride to shed his gem. He beasts out moments later and escapes as the driver calls for help. In a meeting with Gabe and Gloria, Cat is interrupted by a phone call from Tess. She sees the news report about Vincent’s violent escape.

Cat, JT, Tess and Gabe meet up to talk about what happened as they try to piece together where Vincent can be. JT and Tess go to the gravesite again and JT is still upset with Tess and aggravated about the whole situation. Gabe shares his feeling with Cat about how he feels and how upset he is with how Vincent is handling this. He worries about Cat and her meeting with a known fugitive. He is worried he sounds like the guy trying to swoop in and save her, but he has real concerns. He knows Vincent will end up where Cat is because he’ll want to see her.

Just as Gabe predicted, Vincent turns up at Cat’s place, on her rooftop. He shares that he does not want her to make the sacrifice she wants to make by protecting him. He wants just one more night with her. While she agrees to his request, she wants to make certain he is clear that she will get him out and this will not be their last night. She calls JT and tells him what he must get started on and confirms she is with Vincent. He asks Cat for her phone. She wonders why he is persistent about asking for it. He takes it and plays a song with sentimental value to them.

They are interrupted by a knock at the door. It is Gabe. Gabe has good news and shares that he knows who framed Vincent. Cat calls Vincent out and Gabe is not happy that he is there with her. They go to visit Salvo, the person with the information who may be able to save Vincent. Salvo was found dead by Cat and Gabe and they immediately go to see Cat’s dad again. He denies having Salvo killed. As they are about to leave, Cat’s dad tells Gabe that he needs to try harder to protect Cat. Cat comes back and shares the news of a couple more murders of people involved in the cover up.

Cat tells Vincent they need to pack up and go. Vincent won’t let her go with him and makes it seem as though she had nothing to do with Vincent and his escape as he leaves her tied to a chair. He takes off and Cat and JT talk about what happened as Cat is sad to let him go. Gabe smiles smugly at the TV when he sees a picture of Vincent as a fugitive on TV. In bed, Cat hears a noise as she is falling asleep and gets up calling for Vincent. She is then taken from behind and a bag is thrown over her head.

It is heating up now. Tell us what you thought about the first episode back after the long break!