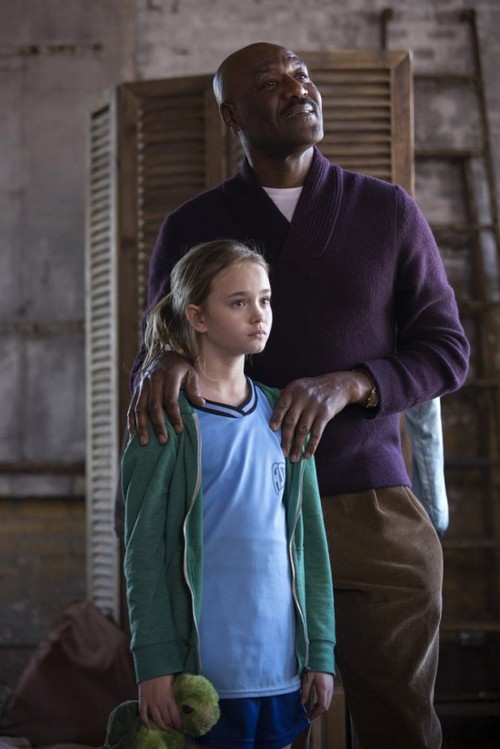 Tonight’s on NBC their new series BELIEVE premieres with its pilot episode.  The show is about Bo who has gifts.  Levitation, telekinesis, the ability to control nature, see the future … since she was born, Bo (Johnny Sequoyah) has had gifts she could neither fully understand nor control. But now that she is 10 years old, her powers have become stronger and the threat from malevolent forces that would use her abilities to control the world has grown more dangerous. With her life and future in jeopardy, Bo’s protector, Milton Winter (Delroy Lindo, “The Chicago Code”), turns to an unlikely source to keep her safe — Tate (Jake McLaughlin, “Crash”), a wrongfully imprisoned death row inmate who’s lost his will.

Tate and Bo begin an extraordinary journey, one in which trust must be earned. On the run and traveling from city to city, every place they stop and everyone they meet will be changed forever.  But they’ll have to keep going to stay one step ahead of the sinister forces after Bo’s power … because it will take a miracle to keep them safe forever.

On tonight’s episode  since she was born, Bo (Johnny Sequoyah) has had gifts she could neither fully understand nor control. But now that she is 10, her powers have become stronger and the threat from malevolent forces that would use her abilities to control the world has grown more dangerous. With her life and future in jeopardy, Bo’s protectors turn to an unlikely source to keep her safe – Tate (Jake McLaughlin), a wrongfully imprisoned death row inmate who’s lost his will. Tate and Bo begin an extraordinary journey, changing the lives of everyone they meet as they keep moving to stay one step ahead of the sinister forces after Bo’s power. The series also stars Delroy Lindo, Kyle MacLachlan, Jamie Chung and Arian Moayed.

The episode starts off with the girl Bo and her two foster parents driving down the street when they see a car getting close to them on the road. They signal for it to go around or to be patient but the car starts to ram into their car causing them to fall off the road and into the ground below. The mom runs with Bo and the dad is killed by someone (probably the one who crashed into). The lady then kills the mom and was just about to take Bo when other people and the ambulance arrive.

Meanwhile a man named Winter dresses up to be a priest of some sort and gets into the prison to talk to an inmate named Tate. Winter needs Tate to escape from the prison and go get the little girl so she can be protected. Once Tate escapes Winter takes him to meet up with these other people who are there to help him get Bo out of the hospital. Once at the hospital, Tate escapes from there and goes to find Bo. Once he finds Bo, he starts to cry, but when he grabs her and starts to leave with her, a woman name Leeds, the woman who killed Bo’s foster parents, shows up and wants to take her.

Leeds and Tate get into a big fight until Bo decides to stab her with some sort of medicine that makes her drowsy and unable to continue fighting. Bo and Tate then escape out of the hospital and take a bus to get away. When they get out of the bus, a van shows up with Winter and Channing who take them to an undisclosed location.

Once at the undisclosed location, Winter and Channing hand Tate a boatload of money. When Tate asks what the money is for, Winter informs him that this money will help him start a life with Bo when they leave for a new destination. None of this makes sense to Tate but he goes along with it, when Leeds shows up to steal the girl away from him. They get into a huge fight and it looks like Leeds is going to kill Tate, Bo lets out a blood curling scream that brings all sorts of birds around Leeds and forcers her to stop fighting.

Once Bo and Tate escape from the getaway car, they head over to a doctor, Dr. Adam Terry that Bo met at the hospital’s house to get help for Tate’s bullet wound. When the Dr. Adam Terry is stitching up Tate’s injury Bo is reading the energy off of the doctor’s dad.  Bo tells Dr. Adam Terry that his Dad wanted to tell the him that he was a great doctor and he really appreciated all he did for him and wished he had told him that he loved him.

Bo also again mentions a girl names Senga which means nothing to the Dr. Adam Terry. She tells him Senga will be a singer and she will make people happy with her singing.

After they leave Dr. Adam Terry house Bo and Tate decide to head off to Philadelphia and embark on a new life together.

Meanwhile back at the hospital, Dr. Adam Terry is taking care of a patient who has these balloons and when he looks at them in the mirror they spell Senga (her real name is Agnes but that was senga backwards).

The episode ends with Channing telling Winter that she can’t believe that a guy from prison is taking care of Bo. Winter tells her that he can, because Tate actually happens to be Bo’s biological father. Winter dropping this bomb on Channing is how the episode ends. We will have to see what happens to Bo and Tate as this journey continues.