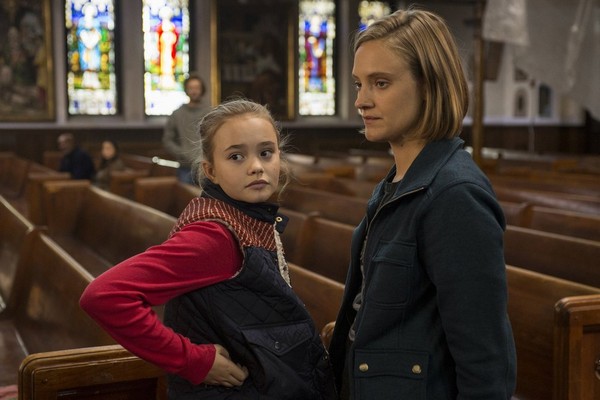 NBC’s brand new series BELIEVE hit the ground running and is getting better each week.  The show is called, “Defection” and on it Surfacing in Philadelphia, Bo sets out to protect a reporter and his wife, but she risks publicizing her powers in the process. Elsewhere, Skouras forcefully tracks a traitor in Orchestra.

On tonight’s episode Bo (Johnny Sequoyah) and Tate (Jake McLaughlin) resurface in Philadelphia where Bo is drawn toward a young woman and her husband, a blogger whose unrelenting pursuit of a mysterious story is threatening to tear the couple apart. Meanwhile, Skouras (Kyle MacLachlan) takes forceful action to track down a traitor within Orchestra. Delroy Lindo and Jamie Chung also star. Kerry Condon and Nick Tarabay guest star.

Tonight’s episode of Believe begins with a reporter named Ben Wooten receiving a phone call from a disguised voice. The called tells him to open his laptop, he turns on his computer and finds a video of a girl levitating in her bed and a classified file labeled “Project Orchestra.” The man on the phone tells Ben he needs to expose the “dangerous organization.”

Bo and Tate arrive at a safe-house and Tate puts her to bed. After she falls asleep he sits down and reads a newspaper with his photo on the front page, saying that he is a “murderer at large.”

In the morning Bo cries to Tate that she is starving and they need food. Tate explains that they can’t get food until Winter brings them money. He sits down and looks at a picture of a girl Bo has been drawing. She says she doesn’t know who the girl is in the picture, but she needs Bo’s help.

Skouras learns that a blogger is posting stories about Project Orchestra. He shows his henchman a picture of Ben’s drivers’ license and tells him to “plug the leak.”

Winter finds Tate at a pay phone and tells him that leaving Bo is not an option, if he doesn’t like taking care of her then Winter can just send him back to death row.

Bo is outside the apartment at the vending machine, she overhears Ben and his girlfriend Taryn arguing. She doesn’t want him to keep blogging about Project Orchestra, she thinks he is “ruining their reputation.” Taryn storms off and meets Bo, Bo befriends her and talks to Taryn about her baby. She tells Bo that it is a secret, and she can’t tell anyone she is pregnant. Bo takes Taryn back to her apartment and shows her the pictures she has been drawing. Tate returns and meets Taryn.

Winter is tracking down Ben’s blog too, he realizes that their safe-house is literally next door to Ben’s apartment. He sends Channing in to the safe-house to get Bo and Tate, they have to move, their safehouse is clearly been compromised. Somebody knows where they are, it can’t be a coincidence. Tate and Bo are eating, she begins kicking and screaming and insists that she can’t leave until she helps Taryn.

Meanwhile next door Skouras’ henchman has arrived at Taryn and Ben’s house. Two men grab them and hold them down. Skouras’ man tells them that he has come to find out who Ben’s source is.

Channing, Tate, and Bo are running to Ben and Taryn’s apartment. Channing knocks out a man in an SUV and then rushes into their apartment. She tells Tate to wait outside with Bo. Tate rushes inside and helps Channing take down the three men. Taryn, Ben, Channing, Tate, and Bo jump in the car and race to an abandoned church to meet Winter. Winter tells Ben that he wants to help him and protect him, but he needs to reveal the source. Ben tells him that he can’t reveal the source, he doesn’t even know who it is. Taryn begs him to trust Winter and stop this. Bo blurts out to Ben that Taryn is pregnant.

Bo wants to help Ben and Taryn, Tate tells her that they are the least of his problems right now. While they are bickering Taryn runs in and tells them that Ben left, he went to go meet the source. As he is climbing in the taxi he calls the NY Times and tells them that he has a huge story for them, and he is bringing in his source.

Zoey is not happy with Skouras, she can’t believe he is sending Joshua out into the field. She is scared that he may hurt Bo, or someone else.

Tate sits down with Taryn. He tells her that his husband had a good idea to run. He wants Taryn to run too, he says he will help her. She wants to go to the police. He insists that they won’t let her, and shows her the ankle bracelet that they put on him.

Bo catches Tate and Taryn hot-wiring a car, she tells him that the keys are under the seat. She begs him to bring her Stanley, her pet turtle from the apartment. Tate and Taryn drive off as Channing and Winter chase them down the street.

Taryn and Tate arrive at the apartment so that Taryn can get her stuff. Taryn tells Tate that “Bo is special” while she is packing her stuff. She has figured out that Bo can read minds. And, she also can tell that Tate truly cares about Bo.

Tate and Taryn have a change of plans. They decide to go track down Ben instead of leaving. They arrive at the bus station at the same time as Winter and Channing and Bo. Ben is waiting to meet with his source. Bo tells Ben that he has to leave with Taryn, they can’t be apart, if he isn’t with her when the baby is born then the baby will die.

Meanwhile Joshua is inside the bus station. He begins erasing Ben’s mind as he is talking to Bo. He drops to the ground and begins writhing in pain. Winter realizes what is going on and tells them they have to get him out of the station. As they are walking him through the lobby his eyes begin turning bright red. Skouras is watching from the security office, and sees Bo walking through the lobby with Winter. The source that was supposed to meet Ben is hiding around the corner, it’s Skouras’ assistant Zoey.

In the middle of the train station Bo begins screaming at Joshua to “leave Ben alone.” She knocks out all of the windows and breaks Joshua’s concentration, and saves Ben. They all head back to the church and Winter promises to protect Ben and Taryn. He tells them to live their lives, and when Bo is ready for the world to hear their story, she will come find them and help them write it.

Winter tucks Bo into bed, she says she doesn’t want her gift anymore because she hurt Joshua with it. Winter reassures her that she doesn’t kill people.