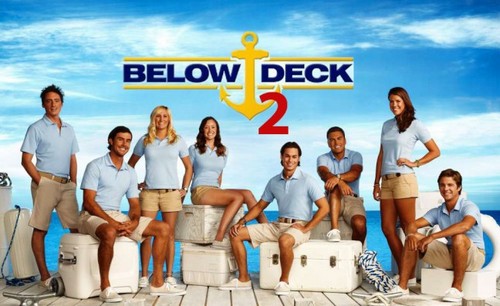 Below Deck returns to Bravo tonight with its second season premiere. On tonight’s episode called, “You’re your Porthole!” tempers flare on deck as the crew hustles to prepare the boat for their first group of charter guests, a larger-than-life group of fun-loving southerners.

For those of you not familiar with the show, Captain Lee Rosbach, Ben Robinson, Kat Held and Eddie Lucas return from last season, along with new crew members Kate Chastain, brother and sister duo Kelley and Amy Johnson, Jennice Ontiveros, and Andrew Sturby to make life aboard the “Ohana,” a 10 million dollar private, luxury yacht, an unforgettable experience. The crew quickly learns that providing unparalleled service to their wealthy and uncompromising charter guests is not all fun in the sun and they are only as strong as the weakest link.

On tonight’s episode tempers flare on deck as the crew hustles to prepare the boat for their first group of charter guests, a larger-than-life group of fun-loving southerners. A rowdy, randy charter guest wants to get very friendly with new deckhand, Andrew. Meanwhile, sparks fly as new crewmembers Kelley and Jennice get extra flirty in their co-ed bunk, and a rookie mistake leads the crew to believe that one of their own may be a liability.

Tonight’s episode is going to be filled with the usual Below Deck drama and you won’t want to miss it, so be sure to tune in for our live coverage of the show tonight at 9 PM EST! While you wait for our recap hit the comments and let us know how excited you are about this new episode of Below Deck.

Below Deck returns for a second season tonight with some familiar faces and a bunch of new ones. Captain Lee is back and so are Eddie, Kat and Ben. Kate is the new Chief Stew and she looks like she should be chartering the boat. Kat already takes a dig at her from the jump. Andrew doesn’t do charters full time, in fact he usually is living at home with his parents but since they don’t really get along this is a great way to escape while making money. Jennice is a female deck hand that insists her size doesn’t prevent her from getting the job done Amy and her brother Kelley are rounding out the crew. She has worked on a lot of boats with Kat in the past and he is an ex marine.

Half of the crew heads out to grocery shop while the rest start attempting to clean the absolutely demolished boat. Eddie and Jennice are cleaning and bonding while Ben reveals that he is going to be bunking with Kate- who is pretty- unquote Amy and Kat are going to bunk together and it remains to be seen whether or not their friendship is back on track

Captain Lee lays down the rules and every broken rule ends with the same result- a one way ticket home. He is thrilled to have Eddie back and Eddie is glad to be there He has now set his sights on becoming a captain. The whole crew is scrambling to finish two weeks worth of work into two days. They have 7 guests coming in and are rushing to prepare everything. Andrew keeps getting caught resting rather than working and Kelley keeps pushing him Clearly these two are going to clash hard.

The guests board and it’s clearly a southern group, ladies with big hair and bright colored dresses. They are having a good time until Ben feeds them sushi rather than the chicken fingers that they requested. He goes up to meet them all and they tell him that are more meat and potatoes and less veggies. He is kind of stunned.

Amy and Kat had a falling out a few years ago and they discuss it awkwardly. There is no resolution because both women think the other is being fake The guests are loving Andrew and he is milking it for all it’s worth. He is taking photos and schmoozing until they invite him to dinner with them. Kate tells Captain Lee that Andrew was invited to the guests formal dinner and he says there is no way that his crew will be serving a rookie crew member.

Kelley loves being able to tell Andrew that he’s not being served by the crew Kate and Ben are getting to know each other and Kat kind of reminds Ben that he is supposed to be her best friend  The Captain joins the guests for dinner and this time they love their chicken dinner. The drinks keep flowing and the guests are getting drunker and rowdier while Captain Lee uncomfortably sticks around.  The next day Andrew is entertaining the guests by drinking water in slomo while they make suggestive comments. While he is messing around the crew realizes that he had left a port hole open in his cabin leading to a lot of water coming in.

This is the final infraction for Andrew and Captain Lee is pissed because salt water destroys his boat. He demands him to get a Shop Vac. On the way to finding one Andrew accidentally ends up in the Captain’s quarters- not a good move. Tune in next week for more of Below Deck.