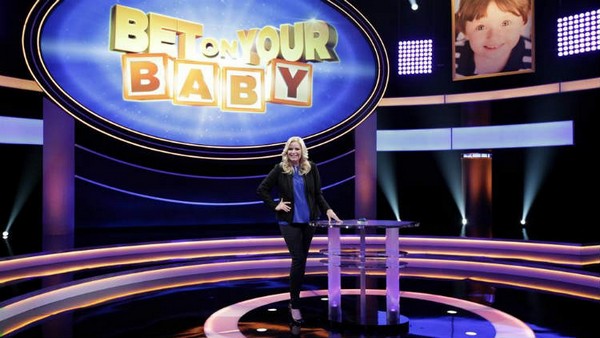 Tonight on ABC Bet on Your Baby continues with a new episode. On tonight’s show youngsters are challenged to dance, score soccer goals and identify school-related items.

For those of you who are new to the show, Bet on Your Baby‘s  episodes features five families with toddlers between the ages of two to three-and-a-half years old, who play to see how well they can guess their child’s next move in order to win money toward their college fund.

On tonight’s show four-year-old Morgan is such a dynamo, her parents nicknamed her the “Morganator.” How will she fare in the game “Operation Rescue,” in which she needs a steady hand and precision timing to save the stuffed animals from their cardboard block towers? Can Dylan’s dad discern what dance moves his two-year-old is busting in the game “Tiny Dancer?” Can three-year-old Blake’s mom correctly predict how many soccer goals he can make with his dad coaching? Olivia is nearly four years old, but is she ready for the rigors of “Teacher’s Pet,” a game in which she needs to identify the school-related items her mom shows her? All the parents return for a high-stakes game of “Baby Talk,” in which they guess the mystery word Melissa and their children are describing. One lucky family moves on to try to break the piggy bank and win a $50,000 college fund.

Tonight’s Bet on Your Baby is going to be exciting, and you won’t want to miss it. So be sure to tune in for our live coverage of the show— tonight at 8 PM EST!  While you wait for our recap, hit the comments and let us know how excited you are about the show?

Hosted by Melissa Peterman, Bet on Your Baby provides the wonderful opportunity of having toddlers compete early on in their development for a chance to win thousands of dollars towards their college funds.

Morgan at 4 year and 3 months will be playing Operation Rescue. One of her parents will be helping Morgan compete by staying by her side in the baby dome. But her other parent, her dad, will be staying outside with Melissa in order to bet.

The task is this: Morgan has to rescue two stuffed animals from surrounding towers of blocks. And her dad had to bet on how many blocks she will knock down in the process. He said at least 3-4. Meanwhile his wife who’s taking this really seriously (and who doesn’t know about the bet) is encouraging her daughter to not knock down any of the blocks.

So how many blocks did Morgan knock over? None! It seems her mother’s technique of being very zen came in handy, although the mother-daughter team were not happy that daddy bet against them. Not only did they lose out on the chance to win five grand, but they have to wait until later to hopefully make it back up. The rules of the games means no immediate do-overs!

Dillon at two years old will be playing Tiny Dancer. And because he dances more with mommy at home she’ll be the one joining him in the baby dome. As for daddy, he has to guess how many dances he’ll be able to identify. He said he could accurately guess 4 out of 5 dances his wife will be showing their son.

How many dances did he get? He got the full four (he missed out on guessing the running man right) thereby automatically winning five grand towards Dillon’s college fund.

Blake at 3 years old and 8 months will be playing Kickin It. Blake is as cute as Beckham, but can he bend it like Beckham? Well, his father is certainly going to try! For five thousand dollars his wife was left behind to guess how many goals her son was going to score during soccer. And instead of going for the higher number, she decided to play it safe by saying he was going to get a 3-5 score.

What did her son end up getting? The reality is he’s more talented than his mother thought – he scored six goals! He had missed a few yet with a lot of time left on the scoreboard; he was able to make it up and then some. Unfortunately this also means they lost the first round as well.

Olivia at 3 years old and 11 months will be playing Teacher’s Pet. She has to identify objects pulled out of a school bag. How many items will Olivia’s mom get her to name correctly? Her dad said his daughter could guess 8 or more. He went with the highest number but did he overestimate little Olivia’s capabilities? No he did not!

Olivia guessed all eight items right on the first try with time to spare. Truthfully, she was very good. Her mother didn’t even need to prod her or anything.

Once all the games were down with the kids the parents then had to compete to enter the college round. To do this they had to guess what all the kids were describing and even though their own son was no help at this, Dillon’s parents won the opportunity. They realized the kids were describing airplanes when they stuck out their arms in wing motion. It was kind of obvious yet no other parent got in time.

It’s unlikely the college round will be this easy!

The college fund round requires playing Smash that Pig. Sounds simple when it’s really not. Mom and Dad literally have to smash open piggy banks to win thousands of dollars. They were given five chances and on their first try Dad won twenty-five grand. But if they kept going then they would be at risk of losing all that they had already gained so the couple played it safe and decided to “stash their cash”.

Dillon and his family manage to walk away with thirty grand towards his college fund. So here’s to hoping inflation won’t make their winnings look pitiful in the next 16 years!