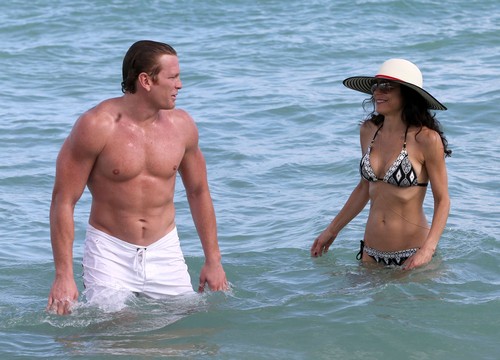 When it comes to business, former Real Housewifes on New York star Bethenny Frankel has more than shown that she knows how to get results. Her icy persona has only benefited her in the boardroom, making her an unapologetic multi-millionaire. Frankel also proves that just because you’re great at one part of life it doesn’t mean that you won’t suck at the rest of it. Her taste in men is pretty lousy, isn’t it? She recently was photographed frolicking on the beach with new boytoy, Michael Cerussi.

According to the Jan. 20th print edition of Star Magazine, “Mac” is loaded with cash and women. Hopefully Frankel isn’t hoping for a love match here because Cerussi is hardly a one-woman kind of guy. Instead he is often seen out with a woman on his arm while texting others to arrange a meet up. He is so cold and calculating that friends close to him call him “American Psycho” because his personality traits resemble those of Christian Bale’s character in the film.

Adding to the bad vibes is the fact that Cerussi was accused of rape back in 2000. He managed to duck out of that situation but it still is a negative spot on this guy’s personal history. Still, Frankel has been seen romping all over this guy. Should she pull the plug and and cut her losses or would you rather wait and see how this all works out? Could he possibly be a decent guy with a bad reputation? My guess is that it won’t end well! Tell us your thoughts in the comments below!