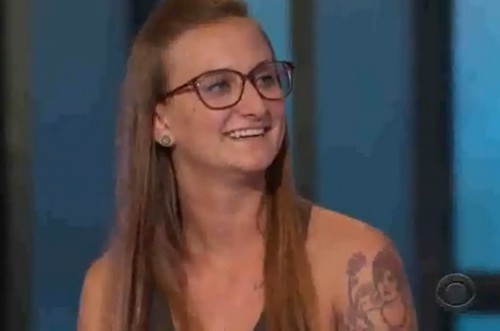 Big Brother 16 audiences are generally not shy about sharing their feelings and Thursday night’s double eviction was a great example of that. When Christine Brecht was sent out the door, she was roundly booed and never got the warm applause that generally welcomes evicted houseguests when they go out the door. Though a handful of people applauded, the vast majority seemed genuinely to want to send a message.

Why was Christine treated so curtly?

The first reason that springs to mind was the fact that she walked out of the house without saying a word to anyone. No hugs and no exchanges of love. Granted she was blindsided by the entire alliance, but usually such flounce and bounces are reserved for other occasions. Evictions are normally a bit more civil.

Truthfully, I think the response was more about how she openly flirted and cuddled with Cody throughout the season, despite being married. When you are publicly obvious like that, no amount of words will cover up what you are doing. While she may or may not have had an affair with Cody, she certainly did not behave like a married woman that loved her husband. There are lines that one simply doesn’t cross….even on Big Brother.

Christine leaves the house as a lesson to the rest. Make sure you are the one to fire the first shot. Christine was repeatedly in a position to switch alliances and make moves, but instead she stood idly by while Donny, Nicole, Hayden and various others that offered to work with her was sent packing. In the end, she played a fifth place game. As a Big Brother Superfan, she surely knew better than to wait so long. What was she waiting for?

The response she got as she came out of the house appeared to truly rattle her. The look on her face and her nervous demeanor seemed to say that she was getting the message loud and clear. Despite her mistakes, her husband seems to be supportive of her time in the house. He has said as much via social media.

That is a marriage that is rare indeed if the things she was doing with Cody are okay. Perhaps I am just a jealous hubby. Then again, it looked to me like America agrees with me. What say you?

Was Christine over the line with Cody this season?