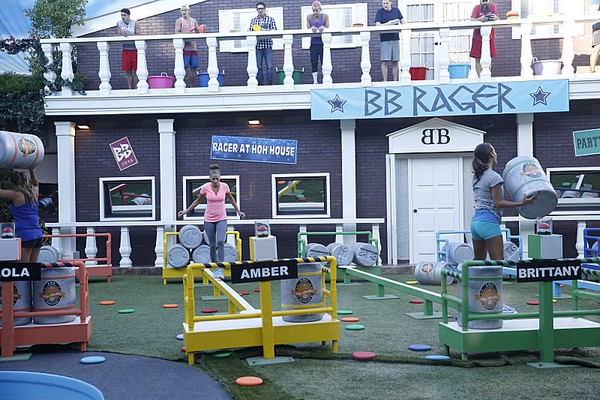 Tonight on CBS BIG BROTHER returns for the sixth episode of their 16th season. On tonight’s episode we see what happens on the live “Eviction Nominations”.  The two new heads of households Devin Shepherd and Amber Borzotra move into their rooms and nominate two house guests for elimination.

On the last episode we saw the first votes casted and found out who was the first houseguest leaving the Big Brother house, it was an intense and dramatic eviction. Did the twist come into play? Most people wanted to get Joey to leave the house and they got their wishes granted when she was sent home. Did you watch the last episode? If you missed it we have a full and detailed recap, right here for you.

On tonight’s episode there are two new heads of household, Devin Shepherd and Amber Borzotra and they will be moving into their rooms; we’ll also get to see which four house guests will be nominated to be evicted from the Big Brother House.

Recap: Julie announces that Cody’s foot hit the floor before he hit the button during the HOH competition and he is therefore disqualified and this means that Devin is the HOH. Devin couldn’t be more thrilled, he is there for his daughter and wants to win this for her. Cody just hopes that Devin doesn’t go power crazy with HOH. Frankie is happy that Devin won because he is part of the Bomb Squad, but he doesn’t trust him.

Zach is trying to keep Cody’s head still in the game with high spirits no matter that he is not the HOH. Meanwhile, Devin and Amber show off their HOH room. Devin loves the pics of his daughter and vows to play the game with honesty and integrity. Devin then goes on to read his letter from home and then Amber.

Caleb declares in the diary room that Amber is a girl he wants to take home to mom.

Devin keeps thinking about his daughter and feels bad about some of things he has done in the house. Devin looks out for Donny and tells him that he didn’t have the trust in him and though he was hiding something; and he went to other people in the house and told them not trust him. Meanwhile Zach is listening and can’t believe that Devin spilled the beans. Donny is who he says he is and declares that it will take time for Devin to regain his trust.

Now that Devin has cleared stuff up with Donny, he wants to have a house meeting and tell everyone. The house is gathered and Devin tells everyone that he wanted to play a hard game (tears are flowing) but wanted to play honestly. He says it is weighing heavy on his heart that he forced Caleb to put up Donny and casted judgement on him, which wasn’t fair because he is a kind and gentle man. Furthermore, the money is not worth sacrificing his integrity, he just wants to do the right thing. Derrick now realizes after this speech that he cannot work with Devin long term.

Devin then calls a meeting between a few key members of the squad to ensure his place in the house. Devin is with Caleb and says that he feels Devin through him under the buss. Straight up everything Devin said now makes Caleb look like a liar because he told the house that the nominees were named based on how they competed in the competition.

Frankie thinks Devin is delusional that telling the truth will get him far in the house. Devin feels that Brittany twisted his words in making people think that he threw Caleb under the base and declares that with or without knowing it, she now put a target on her back.

Nicole is in the backyard with Hayden; the two are flirting. Nicole could really feel herself working with him, but that is as far as it would go.

Nicole speaks to Christine and asks if she thinks she should bring in Hayden to their alliance; she thinks it is a good idea and the two approach him. Hayden likes the idea and thinks they could all help each other get far in the game.

Devin is outside with Caleb by the pool and Caleb tells him that he is lonely because he has nobody to cuddle with (are you kidding?) and Devin tells him that he will cuddle up with him. (this has to be the creepiest bromance, yuck!)

Devin then heads in the HOH room, Amber, Frankie, Caleb and Derek are there. Devin wants to put up Brittany and Paola but Amber wants a guy going up. Derek suggest they put up Hayden, or even Nicole. Caleb says the biggest floater in the house is Jocasta and if he gets HOH, he will put her up.

Devin thinks the kitchen is filthy and assists Amber with leaning it up. Devin goes in to see Bittany, Frankie and Jocasta and tells them they are not animals and should clean up after themselves. Brittany is pissed, she says she is not going to take orders from Devin.

The two HOH draw to put up their nominations first, Devin wins and it is time for the Nomination Ceremony. Devin reveals his nominations first; Paola (who tells Devin that he sucks) and Brittany (who blows Devin kisses). Amber then reveals her nominations; Hayden and Nicole because according to Amber, they are strong players.

Brittany is not intimidated whatsoever, she does not intend on going home. Hayden’s strategy is to act really sad and when it is competition time, go hard. Devin then goes to see Nicole and tells her she is not going home this week and he is going to tell Hayden the same thing; they need to trust him.

Brittany tells Paola that Devin obviously orchestrated the whole nomination to put two strong players and against her and Paola so the nominations stay the same. Meanwhile, Devin speaks to Hayden and Nicole and tells them that Brittany is the target, they have no danger of going home. Devin tells them to trust him and don’t talk to anyone, furthermore Paola is going to throw the competition so Brittany stays on the block.

Zach is not gay, but declares that with the bond he shares with Frankie, he feels like they are dating. Meanwhile, the other houseguests swear they are going to make out.

Devin goes to see Paola to get her to throw the competition; he guarantees that she will not be put up the following week and he will try to keep her all the way to jury. Paola is not sure if he Devin is someone she can trust because he is hot and cold.

It’s 5:10 in the morning and all the houseguests are called to the backyard for the Battle of the Block competition. Nicole is worried that Devin may not have told the truth and both she and Hayden are the real targets. The four nominees are sitting in easy chairs and have to answer various questions. Nicole and Hayden get an early lead in the competition. Nicole and Hayden win, Amber is dethroned and gets pink slime dumped all over her. Brittany hates that Devin is the HOH and declares she is not going down without a fight.