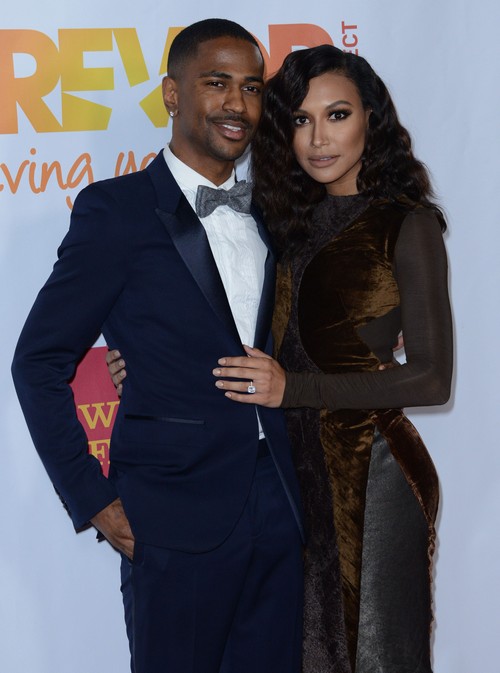 Naya Rivera may be a star on Fox’s hit television series Glee, but it sounds as if her mood is not very gleeful these days. Word on the Internet curb is that Naya’s wedding to Detroit rapper Big Sean is not about to happen. With accusations of cheating and thievery floating about, all indicators point to this not being an amicable parting of ways for the two. For one reason or another, Big Sean felt like he needed to jump ship on the wedding plans and let ol’ Naya “Santana” go.

Big Sean released a statement through his rep:

After careful thought and much consideration, Sean has made the difficult decision to call the wedding off…the recent rumors and accusations reported by so called or fake sources are simply untrue. Sean wishes Naya nothing but the best and it is still his hope that they can continue to work through their issues privately. We will not be commenting again on this matter.”

Now before word of the wedding being called off hit the streets, the rumor mill had circulated stories of Big Sean cheating and being caught by Naya. Clearly he is denying this is the case. Although he neglects to specify what “rumors and accusations reported” he is actually talking about, it is 99% likely he is referring to the cheating rumors. There just hasn’t been any other “rumors and accusations reported” but the ones of infidelity. It is sad to say because we think Naya is probably sitting somewhere right now with a broken heart, but the news is not exactly surprising.

C’mon. This is the dude that has spit lyrics like “I cheat on tests, cheat on hoes, I cheat when I can” and has Nicki Minaj backing her assets up on him in his music videos. Naya is a beautiful girl without a doubt, but she has not the thick curvaceous figure that most of hip hop culture is known for idolizing. In hindsight, her recent unconfirmed breast enhancement surgery should have been a red flag that something may have been amiss between those two. Most folks don’t have these types of procedures done unless they think it is going to make them more, not less, appealing to others. Seems as though one can read that Naya may have gone through with the procedure to fulfill her future husband’s desire for that type of voluptuous bodied woman.

Now, Naya has yet to speak publicly on this situation but her actions do speak volumes. She has unfollowed her beau on Twitter! Do not forget that these two are said to have met on Twitter and have followed each other ever since. This is just the tip of the Twitter iceberg however. A screen shot of a Tweet allegedly sent by Naya and that has since been removed made a shocking allegation. The Tweet said “@bigsean stealing rolexes from a lady’s house now. Maybe cuz I’m on Glee and making more money or something” followed by the hashtag “#triflin.” Whoa Naya.

Story doesn’t end there of course. Unidentified sources with close ties to the couple allegedly spoke to TMZ, the media outlet reported, “[T] he watch was Sean’s in the first place — he bought it for himself when he became successful. We’re told Sean gave it to Naya to wear … but it was never hers to keep.” Either way, it is sounding like things are to a point where Big Sean is snatching things like his Rolex watch out the house. Mess.

We here at CDL wish both Naya and Big Sean well of course; they are both talented people in their own right and we never like to see talent go to waste. Only time will tell how things pan out for those two celeb lovers. In the meantime it is interesting to ponder exactly what one does think will happen next in this situation. Maybe it will get better between them and maybe it will get worse, right? We are curious to know your thoughts on this recent news of Naya and Big Sean. Are you surprised the wedding was called off? What are your inclinations as to what is really going on here with these two? Sound off in the comments section below and help us wash it all out.