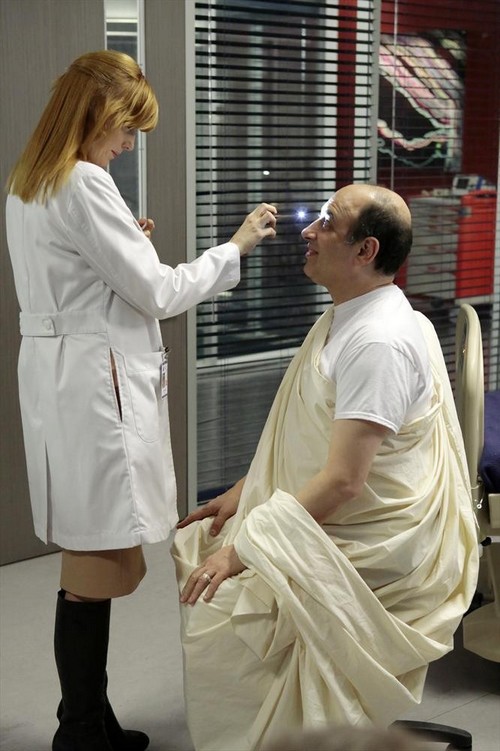 On last week’s episode Catherine and Joshua had different ideas about how the past unfolded after their father made the decision to leave them. Hunter Black was ready to reconnect, though Catherine was reluctant to allow him back into her life. Meanwhile, a decorated soldier was struggling with a war wound that had left him miserable. Another patient was admitted to the Cube with macular degeneration after she fell off the side of a mountain. To her surprise, she began to see vibrant visions of snow leopards and landscapes that she could have never imagined. Elsewhere, Will discovered that he can’t get rid of Delilah without risk of losing his restaurant.

On tonight’s episode Catherine shares a moment of tenderness with Esme when she turns to her for help with winning over the heart of a boy. A close friend comes to Bickman at the Cube after she discovers her husband Jacob gave away his car, liquidated his assets, and has given his penthouse away to his maid. During an examination with Dr. Black, Jacob reveals symptoms of a centuries old condition called Jerusalem Syndrome. Catherine and Owen use unconventional methods to help Dr. Reynaud deal with his crippling fear of death so that he can be at peace in his final days.

Tonight’s Black Box Season 1 episode 5 is going to be exciting, and you won’t want to miss it. So be sure to tune in for our live coverage of the new episode of Black Box — tonight at 10 PM EST! While you wait for our recap, hit the comments and let us know how know how excited you’re about the season.

Tonight’s episode begins with Jacob trying to help his son deal with the death of his fish. When he gets too in depth with his explanation, his wife steps in and tells him all their son needed was a hug. He gets on the computer and is making some foolish financial decisions on a whim. He then gives away the family’s penthouse to the housekeeper.

As Catherine walks Esme to school, she notices that Esme is crushing on a boy, Miles. She does a quick jacket change to help her niece feel a little better about her outfit before taking off. Back at the office, Ian consults with Jacob and his wife about Jacob’s recent rants about God. Catherine walks in just as Jacob’s wife explains how they have never been good practicing Jews, rarely even going to temple but all of a sudden her husband is, as he puts it, “enlightened.” Jacob’s wife explains that his condition began upon their return from a trip to Jerusalem. Catherine talks to Ian about Jerusalem Syndrome as the likely culprit of what is affecting him.

Meanwhile, though Lina is being pursued, she knows her dedication to The Cube doesn’t allow her to pursue romance. Though she considers giving in and letting her heart take a ride, she decides she cannot go through with it and bails on plans for a meeting with her suitor.

Owen consults with a patient who he offers the trial of a new medication that may extend his life. After proudly showing a picture of his grandson, he agrees, explaining that he has a reason to extend his life. Later, when patient Dr. Reynaud, gets up to play with his grandson, he is forced to pause when he sees blood coming from his mouth. His son is concerned. Back at the office, Owen, Catherine and Ian meet about the patient as Owen goes over his Reynaud’s numbers, knowing that he is not doing well and his time is significantly limited. He begs for more experimental medication, yelling that he is not ready to die. Owen apologizes. Later, when Dr. Reynaud meets with Catherine and Owen, he decides he wants to try one last ditch effort for life based on an idea Catherine shares that she heard about as a clinical trial. Later, she provides music, and a comfortable environment for him as he takes the medication. Later, he gets up (in his mind only) and is walking through a field until he reaches a door where he finds his mother on the other side, He connects with his brother, who passed away earlier. He tells Dr. Reynaud that he is not ready to join the dearly departed. Later when he physically wakes up, he tells Catherine and Owen what he experienced.

Catherine, Lina, and Ian watch Jacob’s brain activity as he listens to music. Catherine refers to a gene that can be passed on that is tied to a belief in God. She asks Jacob’s wife more questions about his parents. She thinks perhaps the trip triggered something. Meanwhile, Jacob believes he has cured a patient, Larry, by healing him so that he is able to see again. Ian explains that Larry was receiving drugs that helped retain his vision.

The next day, Jacob is deep into his new persona and his wife begins screaming to him to come back to her. He begins to have blurred vision and begins to shake. Catherine gets up to try to break him out of his trance-like behavior with no luck. Shortly after, when he wakes up in his hospital bed, he is back to his normal self. He is disappointed that he no longer has the power in him that he once had.

Later, the team discusses faith, God, and science as they discuss their own beliefs. Later, Catherine shares Jacob’s story with Will as they enjoy time at home together. Esme texts Catherine to tell her she and Miles hung out after school. Later, she brings Miles home, only to be caught by her father when he smells marijuana. Joshua calls Catherine later to come by to help talk to Esme. Catherine goes to the house and is obviously affected by the still lingering scent of marijuana in the room and she begins seeing odd things (a two-headed Josh, Esme as a butterfly, etc.). She has a hard time getting home because she is still hallucinating. On her way home, she gets a call that Dr. Reynaud has passed away. He had one last vision where his brother was leading him to join him telling him to say goodbye to his grandson. Catherine ends up at the nearest church on her walk home and stairs at the stained glass through tears.

See you here next week for another recap of Black Box!