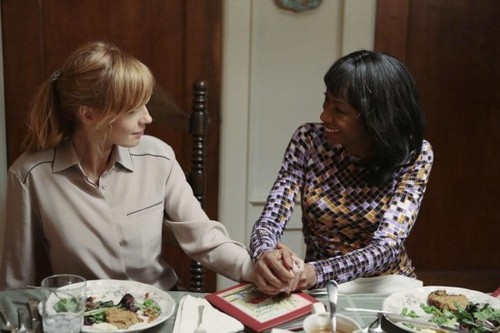 Tonight on ABC is another episode of their highly anticipated new show called, Black Box. On tonight’s episode, Dr. Bickman and Dr. Black work to remove a bullet from a Pulitzer Prize-winning journalist without help from modern technology. Meanwhile, a high-profile makeup artist suffers a minor stroke leaving him color blind; and Catherine meets Will’s parents.

On last week’s episode Catherine and Joshua had different ideas about how the past unfolded after their father made the decision to leave them. Hunter Black was ready to reconnect, though Catherine was reluctant to allow him back into her life. Meanwhile, a decorated soldier was struggling with a war wound that had left him miserable. Another patient was admitted to the Cube with macular degeneration after she fell off the side of a mountain. To her surprise, she began to see vibrant visions of snow leopards and landscapes that she could have never imagined. Elsewhere, Will discovered that he can’t get rid of Delilah without risk of losing his restaurant. Did you watch last week’s episode? If you missed it we have a full and detailed recap, right here for you.

On tonight’s episode a Pulitzer Prize winning journalist arrives at The Cube after being hit by a stray bullet in Syria. The pressure is on when Dr. Bickman and Dr. Black embark on a procedure to remove the live ammo without the help modern technology. A high-profile make-up artist suffers a minor stroke leaving him color blind. Catherine is determined to find a cure when she discovers that this could end his career. Catherine meets Will’s parents and begins to panic at the thought of turning into a boring housewife.

Tonight’s Black Box Season 1 episode 7 is going to be exciting, and you won’t want to miss it. So be sure to tune in for our live coverage of the new episode of Black Box — tonight at 8 PM EST! While you wait for our recap, hit the comments and let us know how know how excited you’re about the season.

The cube is flooded with notable patients this week. And all doctors are on notice. The first case (brought to them by two supermodels) was Frankie. He’s a famous make-up artist and because he suffered from several strokes at once – his vision has become impaired.

Which is why his famous friends brought him to Catherine right away. They’re worried about their friend and the male doctors on the floor can’t wait to be the one to reassure them. However, it seems too much stock has been put on Catherine’s abilities. She’s unable to help him.

Catherine wants to fix Frankie, but there is no known cure at this time for his condition. It could either heal all on its own or he’ll never be able to work again. Her comrades have accepted this. It’s just Catherine that doesn’t want to give up.

And no one is willing to accept her position. Even Dr. Hartramph wanted to see if Katherine was capable of letting go. Not that her interference changed anything seeing as Frankie was still rattling around in Catherine’s head. So Hartramph did what she could to help her own patient – she gave Catherine an idea to get Frankie to see color again.
Catherine and Lina created a special pair of glasses that would give off a certain sound to connect with a color. What with their patient losing a function – others have been naturally heightened including sound. But Frankie doesn’t like it. To him it’s a poor imitation to what he used to have and he doesn’t want to settle for less.

Meanwhile, a second notable patient came in. Miranda Archer, a Pulitzer-Prize winning journalist, was recently rescued from a dangerous Middle East operation. And, unfortunately, she was injured during the rescue. She has what they thought was shrapnel floating around in her cranium and it was up to Bickman to remove it. Though Catherine stopped him before he could operate.

What looked like shrapnel was actually shown to be live ammunition in the CT scan. That coupled with everything a hospital carries on a normal basis could have caused a disastrous explosion.

They need the ammunition out and to operate they had to evacuate the hospital and turn off all electricity. This also meant the picture of CT scan couldn’t be printed so Bickman had to go into someone’s skull using his hands (no metal instruments), a flashlight, and Catherine. After all she saw the scan for herself so it was her responsibility to guide him to through the procedure. And, with a lot of luck, they managed to do so.

But who knew being around explosives would be the easiest part of her day. Catherine, later that night, had dinner with Will and his family and it wasn’t all it could have been. His mother is firm on where a woman’s place is and that’s in the kitchen taking care of her man and one day her family. Will’s mom doesn’t like that she has a job (as Catherine could tell when her future mother-in-law started hinting at part-time) and his mother let it be known that it’s her son that’s the catch. Not the fancy schmancy neurosurgeon!

She told Catherine her son deserves a woman who can appreciate him with the unspoken words of “you better be worthy of him” being left unsaid.

The dinner was an unmitigated disaster and it doesn’t help that Will wasn’t in the mood to find out why Catherine was so disinterested in the first place. He was too busy being concerned about the rampantly erratic Delilah. She’s been coming on to him at work and she sent him a picture of her under during the family dinner.

So Will was looking to take his mind off all of it when he got a text from his business partner, Carlos. Carlos said there was an emergency at the restaurant and Will went running. Never did he suspect that Delilah would go as far as to steal Carlos’s phone.

She got him to the restaurant and then thought her scantily clad body would be enough to unravel him. It wasn’t and he promptly sent her packing along, stupidly, with his coat. Now what is Delilah going to do with that coat of his?

And what is Catherine going to do with Bickman? The attraction is still there and if she’s looking for the perfect escape then an interlude with her co-worker would be just the thing to finally push Will away?