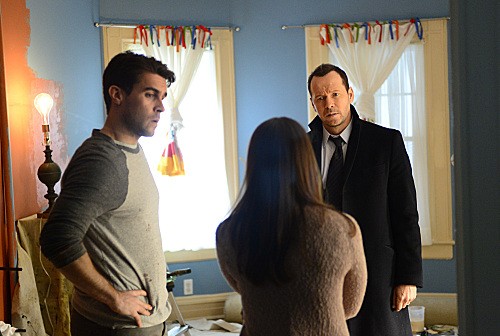 Tonight on CBS Blue Bloods continues with a new episode called,“Knockout Game.” On tonight’s episode a pregnant woman gets punched by teens and becomes a victim of the Knockout Game, so Danny and Baez investigate. Elsewhere, Frank is hesitant to promote an officer because he fears it will look like preferential treatment. Did you watch the last episode?  We did and we have a full recap right here for you.

On last week’s episode when Danny took a call from a woman who was threatening to kill herself along with the man who killed her parents in a drunk driving accident, he rushed to find her. Meanwhile, Frank accompanied his grandson, Sean, on a class field trip and struggled to get the lead chaperone to loosen the reigns so the kids can have fun.

On tonight’s show Danny and Baez investigate when an expectant mother is a victim of a “knockout game,” in which teenagers punch unsuspecting civilians in the head. Meanwhile, Frank wrestles with promoting an officer when he thinks it can be viewed as favoritism.

Blue Bloods “Knockout Game” airs tonight at 10:00 pm ET and we will be live blogging all the details. So don’t forget to come back and refresh your screen often for live updates. While you wait for the show –  let us know what you think of the season 4, so far

The Knockout Game is all the rage in New York but it’s become such a concern that the subject managed to land on Frank’s desk. The Commissioner’s office has to figure out a way to deal with this seemingly growing epidemic. It appears to just be random violence but there is a link between all the cases. All the victims were white while their perpetrators were black. So Frank wants to classify it as a hate crime and he wants the newspapers to stop sensationalizing the stories.

Moore thought they should be conscious about throwing those words around, but Frank pushed ahead with his own wording. He called it as he saw it!

Knockout has gotten so dangerous that even Danny has to deal with one of those cases. A married couple was enjoying a night out when the wife was just punched in her face. It made her hit the car next to her and lose consciousness. Also the mother was in advanced stages of pregnancy at the time, but she lost the baby after someone used her as a punching bag for fun.

However there isn’t any evidence to help find out who assaulted the wife. The only way the detectives could get answers was use one of Danny’s old tricks (as in completely dirty and illegal). He barged in on a former drug dealer he used to know. Danny and Baez knew the man would still have his hand in the honey pot and all they had to do was use the threat of arrest to get him to open up. And because it was this man’s girlfriend that the cops wanted to bring in, the informant quickly told them all about the local guys in his neighborhood that have been playing the Knockout game. To help point them in the right direction he gave up his cousin.

The very same cousin that tried and failed to run away once he realized the cops were after him. And to get this particular guy to start speaking; they then employed another one of their “creative” techniques. They unlawfully threw him in the back of the truck and took a drive. But it was a waste of their time. He wasn’t their guy.

The husband had come down to the station to see if they had a lead so when he saw them bring in a suspect he asked Danny to talk to the man. He wanted the person who hurt his wife to know how much damage they caused his family. Because they didn’t just lose a baby. They tried for five years to have that baby and after numerous in-vitro they finally got pregnant. They had called their baby their miracle and now the father is wondering if god is merely cruel.

So when Danny had to go back to see the husband; he wanted to let him down face to face. Danny caught him painting what would have been their son’s room.  Mike didn’t want his wife to have to face the fully decorated nursery and was painting it a burnt orange. While he was busy at the task, Danny started to ask him questions about that night. They need more evidence to go on and haven’t found enough as it is. The wife though was able to help. She overheard one of the attackers calling the guy that hit her “Moses”.

Danny knows that name well and had told the couple that Moses is a drug dealer he’s familiar with, but imagine his surprise when he later hears at the office that Moses was killed. The cops at the scene think it was a drug deal gone wrong yet Danny knows better. He saw boot prints covered in paint at the scene.

His family convinced him to turn Mike in despite his own personal misgivings on the subject. His grandfather thought the hypothetical cop should drop a case like that while Frank told Danny that all cops had to do the right thing. And that includes himself.

Frank has been dealing with his conscience lately. On top of having to deal with The Knockout game, he found out his father is pushing for the promotion of Officer Timothy Doherty. The officer also happened to be related to one of Henry’s old drinking buddies.

Frank saw what his father did as favoritism and he doesn’t want to be a part of that old world maneuvering, but Moore called him out as a hypocrite. And he had every right to – Frank wouldn’t have climbed this far if he hadn’t had strings for him. So Moore made Frank give this younger officer another chance. And after meeting Doherty, Frank ended up offering him the promotion.

Although he swears he only did it because he realized how much of a good cop Doherty was.

Sometimes good people need a break. And because Danny talked to his sister about Mike’s case, she decided to be lenient on the grieving father. After all he didn’t purposely meet with Moses to kill him. Mike’s story and the evidence all say that it was an accident so the D.A. chose not to press charges against him.

Erin can go easy on people when she needs to, but the one guy that won’t be getting a second chance with her is her ex-husband. Her ex wanted to have all the fun parts of being with her without any of the responsibilities. So she dumped…yet again. Who knows maybe this breakup will be the one that sticks!