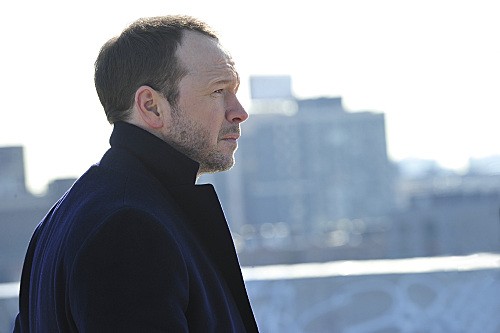 Tonight on CBS Blue Bloods continues with a new episode called, “Secret Arrangements.”  Danny and Baez investigate the murder of a college professor who was involved with a questionable scholarship program. Meanwhile, Danny learns that his father didn’t tell him that the DA is investigating him for ethical and procedural violations.

On last week’s episode Danny and Baez investigated the death of a woman whose body was dumped after she was killed by a lethal dose of lidocaine following secret plastic surgery. Meanwhile, Frank privately assigned Jamie a cold case and Erin tried out speed dating.  Holt McCallany guest stars as someone Erin met at a speed-dating event, but winded up going up against in court.

On tonight’s episode Danny and Baez investigate the murder of a respected college professor who was involved with a questionable scholarship program. Meanwhile, Danny discovers that his father didn’t tell him that the District Attorney is investigating Danny for ethical and procedural violations.

Blue Bloods “Secret Arrangements” airs tonight at 10:00 pm ET and we will be live blogging all the details. So don’t forget to come back and refresh your screen often for live updates. While you wait for the show –  let us know what you think of the season 4, so far.

On tonight’s episode of Blue Bloods, a seemingly average English professor was murdered. However Benjamin Daniels had a few secrets. Because a man with cell phones – one for family and the other a burner – definitely has to be up to something.

Though don’t even bother telling his wife. She met Ben in grad school and she’s never given up the ideal of him being her heartsick poet. So when Baez and Danny asked her if her husband had any issues. Such that would require an extra phone – she instantly denied that Ben could be anything other than a good man. And she made a point to remind the detectives that it’s her husband that’s the victim here.

Not that Danny and Baez is going to let her word be the sole basis for not looking into the professor.

A list is floating around. It’s comprised of a detectives that have been a little too good in getting confessions and informants. Danny’s name happens to be on that list and now both Frank and Erin know it. It’s her office that’s investigating the names on this list and while they’re concerned about Danny they can’t be seen getting entangled with this investigation.

But Frank needed to do something and his second advised him to have word with his son off the books. Yet Frank chose to go a different route. Rather than speak to his son, he chose to have a conversation with Danny’s Sgt. He wanted Sgt. Gormley to put together Danny’s case files for his viewing.

While his son, who doesn’t know he is being investigated by either his father or the DA’s office, continued digging into Benjamin’s life. And what he found out was that the professor was involved in an escort service.

Benjamins’ girlfriend was Maggie Parker. She’s a junior at Hudson which was the same school Benjamin taught at. So odds are they ran into each other outside of their pre-arranged dates.

Maggie is a scholarship student and yet she has her own apartment in the city. When Baez called her on it – she quickly realized they were onto her nighttime activities. Though she said that she had feeling for Benjamin. She followed up that lie with claims that she also had nothing to do with Benjamin’s death.

Danny applied pressure on her and she told them about her ex-boyfriend. She had broken up with her ex and when he caught her with Benjamin – he went berserk. He started to threaten Benjamin and he’s basically been stalking Maggie ever since.

Danny finally has lead on his case, but his mood went sour when he found out about the investigation into his cases after returning to his precinct. An informant of his wanted to give him the heads up. But Danny was more upset that his own father didn’t even give him notice rather than the fact he’s being looked into.

He went to his father’s and demanded to know why the older man hadn’t said anything to him. Especially when he suspects the investigation coming from his father’s office and not higher up.

Frank was just hurt that Danny could have thought of him that way. So he didn’t say anything to defend himself. And Sunday night’s dinner suffered under the tension between the Reagan men.

Danny ended up leaving the dinner early. His partner called him with information about Maggie’s boyfriend and so Frank let him go. He knew Danny wasn’t really there with them anyway.

Jamie also left the dinner early. He had double date with Jenko, her high school friend, and an old friend of his from Harvard. Though the date didn’t go as planned either. His friend was interested in Jenko, but he doesn’t want to compete with Jamie for her. He told Jamie to wake up. Even he could see how much Jamie was into his partner.

So with that thought in his head, he somehow found himself kissing Jenko later that night. It happened after he had walked her home and they were laughing so one thing led to another. Then by the next morning, they both downplayed it as a drunken mistake – something they could laugh about in the years to come.

Maggie’s ex had an alibi for the night Benjamin died and it wasn’t until the detective read Maggie correspondents with her married lover that they realized there’s a second suspect they haven’t looked into yet – like his wife. Benjamin had written her poems back when they were in college together. That’s the main reason why she fell in love with him. So to learn that he then used those same poems to win over Maggie proved to be Mrs. Daniels’s breaking point. She killed her husband when she found out.

Once his case was closed – Danny found out, via Erin of course, that the investigation was only preliminary and that his father wasn’t behind it. The DA’s office wanted the check up and so far they’ve got nothing. While Frank’s own investigation showed minus the few hiccups that can easily be rectified – the detectives that got the much needed information were to be applauded. And that some of his other detectives could learn from their techniques.

So really Danny had to learn the hard way that he shouldn’t distrust his dad because Frank was always going to trying and help. Danny isn’t the perfect cop, but he’s also isn’t the worst.