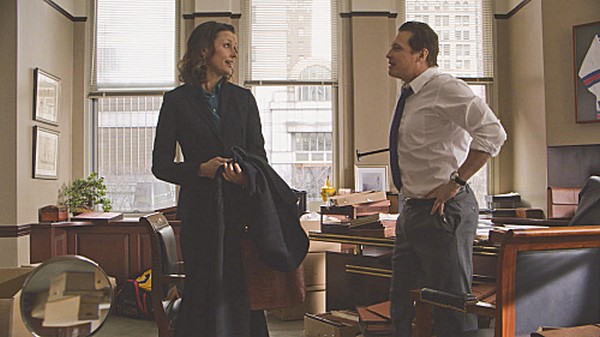 Tonight on CBS Blue Bloods continues with a new episode called,“Righting Wrongs.” On tonight’s episode a woman dies after undergoing a secret plastic surgery, so Danny and Baez try to figure out what happened. Elsewhere, Frank asks Jamie to solve a cold case; and Erin explores the world of speed dating.

On last week’s episode Danny and Baez investigated when an expectant mother was a victim of a “knockout game,” in which teenagers punched unsuspecting civilians in the head. Meanwhile, Frank wrestled with promoting an officer when he thinks it can be viewed as favoritism.

On tonight’s episode Danny and Baez investigate the death of a woman whose body was dumped after she was killed by a lethal dose of lidocaine following secret plastic surgery. Meanwhile, Frank privately assigns Jamie a cold case and Erin tries out speed dating.  Holt McCallany guest stars as someone Erin meets at a speed-dating event, but winds up going up against in court.

Blue Bloods “Righting Wrongs” airs tonight at 10:00 pm ET and we will be live blogging all the details. So don’t forget to come back and refresh your screen often for live updates. While you wait for the show –  let us know what you think of the season 4, so far.

Erin and Linda were out running together. Like many women do for exercise when Linda mentioned a new way for Erin to meet guys. She suggested speed dating and because Erin lost a best to her – she was forced to comply.

However other joggers’ day didn’t end with an agreement to date several people in an hour. Nicole Garland’s body was found on familiar track and yet the case doesn’t make sense. And that could be because of the glaring holes in it. For instance, Baez noticed the victim was wearing Christian Louboutin shoes and not only are those uncomfortable while running, but they also happen to be too expensive for the area the victim was found in.

And the case gets stranger. Nicole’s husband didn’t even know that she was still in the city. She was supposed to be spending a girl’s weekend in Aruba with her friend Emily.

The detective started to think that maybe she was having an affair, but the real answer behind why she lied to her husband is that she didn’t want him to know she was getting plastic surgery. Nicole died from a bad reaction to a drug.

Her friend Emily said Nicole called it a “Mommy Makeover”. She did the tummy tuck and breast implant when she started to feel like her husband was growing bored with her. He was actually having an affair with a younger woman during their marriage so no surgery was ever going to be able to turn back time for them.

And yet despite her husband having motive and means seeing as he is a doctor – he wasn’t the one that killed his wife. That was the plastic surgeon who was even now facing malpractice suit and panicked when his current patient, Nicole, started to flat line at his clinic.

He had lied to Danny and Baez when he said Nicole left his clinic alive. The surgeon and his nurse dumped her body and made it look like she had return to her hotel after the surgery – walking and in great condition. But sadly for them, Danny saw that it was the nurse and not Nicole in the surveillance footage.

It’s sad that Nicole died trying to being attractive. Especially when someone like Erin doesn’t necessarily tries to get men’s attention. She didn’t even do it by being nice!

Erin’s speed dating experience was a bust and that’s mainly her own fault. After all she was the one that kept taking work calls in the middle of a five minute date. So no wonder someone called her on it. And the truth is that anyone would be offended to have that happen to them.

Erin on the other hand didn’t think she was being rude and so she left the dating service in a huff. Although she hadn’t expected the guys she blew up at would be the very same man she had an appointment with later that day. That was an uncomfortable second meeting!

And she only agrees to after she realized that he once prosecuted the client he’s representing now.

Sure, Morales has been in and out of the system, but that more had to do with her boyfriends than her own personality. Her lawyer saw this and he made Erin see it for herself too. The only thing his client is guilty of is that she picks men that use her in their crimes.

Erin ended up letting his client off lightly. All Morales has to focus on is getting clean in mandated rehab. So maybe it wasn’t bad thing for her to take a second look at the case.

Still, that can’t be said for everyone. Erin found out that her father had ordered a second investigation into a cold case. Technically, the case was solved and someone was sentenced, but Frank isn’t sure they put the right man away.

That’s why he’s willing to risk upsetting detectives and the DA’s office in order to get the truth. And the detective he chose for the case just happens to be his son, Jamie.

Jamie is under strict instructions to not tell anyone that he’s on this case. It has way too many political ties attached and that also means he couldn’t say a word to Jenko. She was mad at him for it, but she soon realized that he would tell her if he could. Even though Jamie really does need someone to talk to about the case. So far its only frazzling him.

He worked himself up worrying about closing this case and that’s because he knows this is his first and possibly only chance to become a detective and it’s not like his father can hand him another one. Frank knew his son couldn’t simply get a promotion without everyone commenting. They would either say that he got job because of Frank or he missed out for the job because of Frank.

When the reality is – Jamie is a good detective. Regardless of what everyone said about the murder of Michelle Lowe being closed – Jamie still managed to find the real culprit.

So is this finally going to earn him the brownie points he needs to become a real detective?