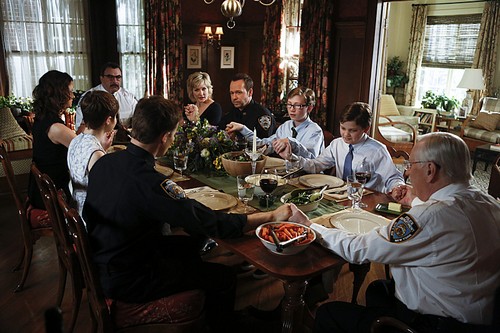 Tonight on CBS Blue Bloods continues with a new episode called, “Exiles.” On tonight’s episode In the fourth-season finale, Danny works on an off-limits case and is then put on modified duty. Realizing he’s stumbled onto something big, he alerts Frank, who does some digging and is shocked by the enormity of the situation.

On last week’s episode when a detective from Danny’s precinct was killed while working undercover, Frank put on a full-court press to find his killer, only to discover that the deceased had a big secret. Meanwhile, Jamie and Eddie helped Nicky track down a former classmate who was living on the streets.  Did you watch last week’s episode?  If you missed it we have a full and detailed recap, right here for you.

On tonight’s episode When Danny is placed on modified duty after investigating a case that was off-limits, he realizes he stumbled upon something that someone is trying to keep quiet. When he passes the tip on to his father, Frank is alarmed when he learns the enormity of this case and the internal involvement.

Blue Bloods “Exiles” airs tonight at 10:00 pm ET and we will be live blogging all the details. So don’t forget to come back and refresh your screen often for live updates. While you wait for the show – let us know what you think of the season 4, so far.

Danny is placed on desk duty after investigating a case that was off-limits, and realizes he has stumbled upon something that someone within the NYPD was trying very hard to hide. He passes the information on to Frank, who is alarmed when he discovers the enormity and corrupt nature of the situation.

Tonight’s episode begins with a woman slowly walking outside onto her top floor hotel balcony with nothing but a robe on. She seems very peaceful as she pauses for a moment, hair blowing in the wind. She slowly makes her way to the ledge and with no time to pause, jumps to her death.

Eddie and Jamie find themselves in the middle of a family confrontation on the street they are able to settle down. The couple involved beg for help because they want to get married. They want to help but there are immigration issues involved, so they take off, wishing them good luck. The daughter, who wants to marry her boyfriend and is of legal age, comes to the station asking for help again. She is still fighting with her father over wanting to get married and now he is holding her legal documents that she needs to get married. Jamie tells her they can help, but they will have to arrest her father, She is not ready to do that. After a few more confrontations, the now newly married couple come to thank Eddie and Jamie for their help.

Danny is investigating the case with the woman who just committed suicide and is asking several questions to those who saw something. They talk to a hotel employee who shares that he already talked to the detectives and Danny and Maria wonder who he spoke to. When searching the hotel room, they find that the DA’s office has already taken over the case. Walt Finney is one of the detectives and it is very obvious that he and Danny have a history…and it is not good. At the station, after being told that the DA’s office is handling the case and to stay out of it. He doesn’t listen and tells Maria he is off to see Erin. She tells him not to, reminding him of their orders, but he is already one step out the door. He asks Erin for anything she knows about the Eileen Clayton case but she tells him there is nothing she can do. Shortly after, Danny sees his nemesis Walt and the two argue a bit more with Danny even challenging him to get out of the car to fight him. It is tense between these two.

Once he arrives back at the station, he is told that the DA’s office filed a complaint against him for harassing their detectives. Danny has had it and is heated now! Danny tries to explain to his sergeant that he only confronted Walt after he slashed his tires. The sarg asks if Danny witnessed him do it and he says no. He asks him to hand over his badge and gun as he is being placed on leave. He blows up but ends up handing the items over.

Later, Erin finds out that it was her who got Danny placed on leave after sharing that he asked her for details on the case. She obviously didn’t mean for him to get into trouble. Now, her brother was placed on leave and when she shares her feeling on the matter, she is told by Amanda that she cannot afford to buy into the family business. Erin is shaken.

Danny and Maria begin to suspect some strange things going on with the case. Danny calls in an anonymous tip about possible corruption from the NYPD to Frank who, in turn, seeks Kelly’s help in getting more information about the dead woman and her connection to a madam and he wants to see her black book. Kelly agrees to help and says she’ll be in touch. Later, when they meet up again, Frank thanks her for coming through with her help. She tells him that she is leaving her position but not before sharing some personal feelings for him and questioning him still wearing his wedding ring.

Amanda gets tough with Erin after she is questioned on the way the sting operation investigation was handled and why things seem to have been handled wthout adherence to policies. Amanda explains that she was trying to protect the integrity of those who may be involved and/or in the escort’s black book. Things are not adding up and Erin knows it. The fact that Amanda is getting very defensive, makes Erin even more suspicious.

Frank ends up getting a video that includes one of Eileen’s girls and one of his men! Things are starting to fall into place now as Dino is giving up al the details on what happened, even admitting to orchestrating Danny’s leave. Frank calls Danny in and instructs him to take Dino’s gun and badge as he is fired for his involvement. He took sex in exchange for protection and then covered up things from the investigation to cover himself and others who were involved.

Erin goes in to see Amanda and calmly tells her that how she felt about working with her and then goes in for the kill. She tells Amanda she is warning her because she was given information about the video surveillance that was given to her father. Amanda seems unfazed telling her that there are no ties from Erin’s father to her. Erin goes on to tell her how Arbogast gave a full statement and gave her name as one involved in the cover up in order to keep Clayton’s business up and running for her benefit. Amanda is not backing down and acts very flippant. Erin tells Amanda how she filed a complaint with the grievance committee against her for the investigation. Amanda goes off on her with some major venom spewing knowing she is caught and all her dirty deeds will be exposed.

In the last scene, Frank delivers his touching and inspiring speech to the new class of graduates. We’re going to have a tough time missing our fave show after this season finale.