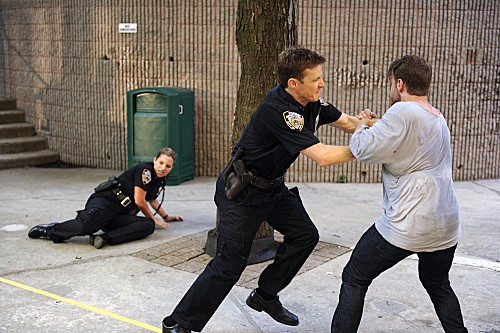 Tonight on CBS Blue Bloods premieres with an all new Friday September 26 Season 5 episode called, “Partners.” On tonight’s episode in the fifth-season opener, Baez gets injured while escorting confiscated drugs, so Danny goes after the drug cartel responsible. Elsewhere, a lieutenant with a commendable record engages in controversial behavior, putting Frank in a difficult situation.

For those of you who don’t know, Blue Bloods is an American police procedural drama series shown on CBS in the United States and Canada. The series is filmed on location in New York City with occasional references to nearby suburbs.

On tonight’s episode as Danny and Baez escort confiscated drugs to a remote location for incineration, their convoy is attacked and Baez is seriously injured, leaving Danny to track down the drug cartel responsible. Meanwhile, Frank must carefully navigate personal and political waters when an exemplary lieutenant’s actions cause controversy for the NYPD.

Blue Bloods “Partners” airs tonight at 10:00 pm ET and we will be live blogging all the details. So don’t forget to come back and refresh your screen often for live updates.

There was an incident in Times Square. A homeless man was making a nuisance of himself. He was throwing things at pedestrians and spitting at people. So a fed up lieutenant advised one of his underlings to use the stun-gun. He figured that would bring everything to a quick conclusion but something went wrong.

The man fell after he stunned and he ended up getting hit by an oncoming car!

After that, the mayor wanted blood and not the bad press. Hence he was prepared to throw the officer to the wolves and claim it the incident was all the officer’s fault. Just another case of excessive force. While Frank, the police commissioner, doesn’t know what to think. He can understand the cop and feel for the family of the victim at the same time. But the Mayor doesn’t necessarily care to listen to Frank’s opinion or to wait around long enough to hear it.

So that’s that and in the meantime 30 million dollars’ worth of drugs disappeared right off the street. Now that would definitely be bad press.

The missing drugs happened on Danny’s watch. He and his partner Baez had signed up for over time and that meant they had to escort the drugs to lock up. They had one armored car and two cars being used as an escort. So a bit lite on protection yet that way no one was drawing attention to what was being transported.

The transport was attacked and Baez was left injured. And one of their own was taken as hostage. Later her body was found next to the emptied vehicle and there was no signs of their suspects. Though one of the perps was dumb enough to leave behind a fingerprint.

The criminal had a record so he was in the system but Danny was shocked to see who’s this guy’s known friends are because one of the names looked really familiar. It was Javie also known as Baez’s brother. So of course she wanted in on the case when she heard. She thought her brother had betrayed her and according to him – if anyone sold them out then it had to be the DEA. Javie has been working as an informant for them and they were looking for the same people his sister and Danny are hunting.

Though for some reason the DEA never got close enough to make an arrest. Why is that? Could there possibly be a mole in the organization? Javie thinks so and that “special” friend of his even confirmed it by saying his friend on the inside gave him the information on when the convoy was going to be on the move.

Then Sunday night dinner came around again and this time it turned out being a bust. The case about the lieutenant had come up and everyone seemed to have a different opinion about it. The cops at the table spoke up in the officer’s defense and as for Erin – she got technical. The officer caused someone’s death so that must be accounted for.

And then when the conversation was getting too personal amongst his sons and they had begun fighting – Frank informed everyone what happened to the officer currently under review. He broke his sobriety and crashed his car.

Frank felt somewhat responsible for what happened to his officer. It also made him re-think his job for a second but he soon realized that he could do more good from his position now than he would if he walked away. So he held a press conference. And this time he honored a cop that sure made a mistake yet didn’t need to be vilified.

As for Jamie and Danny. They had argued over Jamie’s close relationship to his partner. It seems everyone could see how much Jamie had begun to care for Edit and so Jamie made the decision to distance himself from his partner. It was the only way they could continue working together without it harming their performance on the job.

And Dany got the bad guys in the end but that too came at a price. He and Baez had found their mole inside of the DEA and they were raiding their criminals hiding spot when Baez ran into her brother – Javie just couldn’t keep his feet on one side of the sense. Then when one of the dealers opened fire on Baez – her brother stepped in front of her and took the bullets.

Javie didn’t survive the fall-out though in his final moments on earth he finally did something that made his sister proud of him!