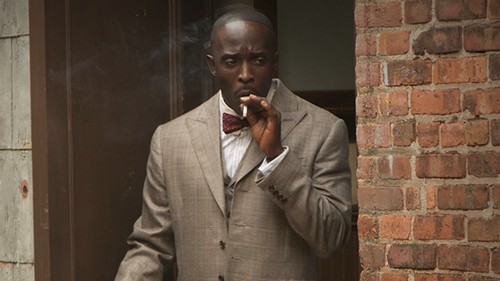 Tonight’s episode of BOARDWALK EMPIRE was action back and a great episode. Lucky got the proof he wanted that it was Meyer Lansky who hired the hit on him and Nucky sent Meyer a message right back.  I cannot wait to see how Meyer reacts next week.  To wet your appetite, we have a sneak peek video and some insight for you below on what is going on next week episode called, “What Jesus Said” below.

On tonight’s show back from Cuba after an attempt on his life, Nucky paid a visit to the now-retired Johnny Torrio, who agrees to broker a meeting with the new “Boss of Bosses,” Salvatore Maranzano. In Chicago, Eli and Van Alden were tasked by Mike D’Angelo, Al Capone’s new right-hand man, to recoup money lost during a federal raid by Eliot Ness. Fresh out of law school, Willie Thompson had a job interview. Rebuffed by a group of would-be financiers, Nucky dined with Tonino Sandrelli before sending a message to Lansky and Luciano ). Lots happened on episode 9 and if you want to find out we have a full and detailed recap of tonight’s episode, right here for you!

Spoiler alert: If you’re one of those people who doesn’t like spoilers, stop reading now! We have some juicy spoilers for you about the season 5 episode 3 of HBO’s “Boardwalk Empire”

Official HBO synopsis of next week’s episode: “Chalky heads in a new direction after assessing his latest partnership. In New York, Margaret finds herself in a quandary as a result of her association with Arnold Rothstein. Nucky hosts a prospective “big fish” partner from Boston. Luciano and Siegel meet with Narcisse (Jeffrey Wright) in Harlem, promising business as usual, but encounter resistance. In 1884, young Nucky is privy to the passion of a hotel guest, and flirts with a young girl.”

On next week’s show it looks like Nucky might be getting into gambling.  Meanwhile, Lucky informs Doctor Narcisses that Manzarano wants to do business with him and Manzarano also offers Narcisse protection. Narcisse reminds Lucky and Siegel that they are in Harlem.