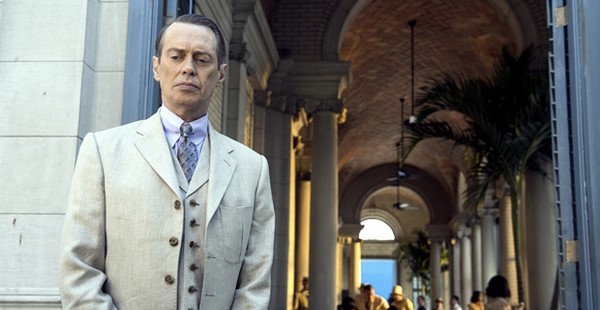 Tonight’s episode of BOARDWALK EMPIRE was another great episode, I cannot wait until next week’s episode!  To wet your appetite, we have a sneak peek video and some insight for you below on what is going on next week episode called, “Cuanto” below.

On tonight’s show Chalky headed in a new direction after assessing his latest partnership. In New York, Margaret found herself in a quandary as a result of her association with Arnold Rothstein. Nucky hosted a prospective “big fish” partner from Boston. Luciano and Siegel met with Narcisse (Jeffrey Wright) in Harlem, promising business as usual, but encounter resistance. In 1884, young Nucky was privy to the passion of a hotel guest, and flirted with a young girl.  Lots happened on episode 9 and if you want to find out we have a full and detailed recap of tonight’s episode, right here for you!

Spoiler alert: If you’re one of those people who doesn’t like spoilers, stop reading now! We have some juicy spoilers for you about the season 5 episode 4 of HBO’s “Boardwalk Empire”

Official HBO synopsis of next week’s episode: “Facing a shared dilemma, Nucky and Margaret find common ground in Atlantic City. Luciano encounters an old adversary while meeting with Capone (Stephen Graham) in Chicago. Sally Wheet (Patricia Arquette) makes a payment in Cuba amidst concerns of a grass-roots uprising. In 1884, young Nucky shows young Eli (Oakes Fegley) how the other half lives, and takes another step up the Commodore’s ladder.”

On next week’s episode Margaret heads over to see Nucky to get help because Arnold Rothstein’s wife is threatening her.  Al Capone is getting more out of control.  Sally is having problems with the provider of the sugar cane for Rum.