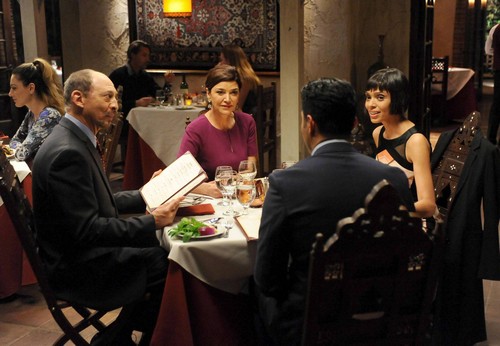 Bones returns tonight with a new episode called, “The Cold in the Case.”  On tonight’s episode remains found in a swamp belong to a woman who was cryogenically frozen before being discarded, which leads the investigation to a preservation facility. Meanwhile, Cam is nervous about meeting Arastoo’s parents; and Booth is up for a big promotion, but it might mean relocating his family.

On last week’s episode the Jeffersonian team investigated the death an art school dropout struggling with Lupus, whose remains were found inside a log in a forest. When the team learned about the victim’s use of cannabis to treat her pain, it led them to the dispensary where she worked, and they uncovered more shocking details that could have contributed to her death. Meanwhile, squintern Wendell Bray (guest star Michael Grant Terry) returned after starting cancer treatments, and while working on the case, he started to open up more about his illness, only to reveal some shocking news that may have ended in his termination. Also, Booth prepped for his FBI Competency tests.

On tonight’s episode the Jeffersonian team investigates the murder of a woman whose remains were found in a swamp. When the team realizes that her body was cryogenically frozen before it was disposed, it leads them to a cryogenic preservation facility where they learn more about the victim’s personal life. Meanwhile, Cam is hesitant to meet Arastoo’s father and mother (guest star Shohreh Aghdashloo) for the first time and Booth is up for a huge promotion that could uproot his entire family

If we’ve learned anything from Desperate Housewives then it must be this one fact – nothing holds secrets like suburbia. A lovely young couple was looking at some potential plots when their dog came upon the remains of a skeleton. That had freaked out the prospective buyers and truly nothing the realtor said could have tempted them by then. So its safe to say that the couple will not be returning to this little corner of hell.

Cam was with her boyfriend when she got the call about the body. That call stopped Arasatoo from making even more of a fool of himself. Because he was explaining to Cam that his parents were in town, but at the same time he made it pretty clear that said parents were also going to hate her.

So Cam was already in a bad mood when the body they found added to her head ache. There is a problem with the remains. As in no could can detect when their victim died seeing as her remains is showing signs of dying at different times.

Their victim’s name was Madeline and she recently lost her daughter to cystic fibrosis. Booth soon found her disgruntled ex-husband and brought him in for interrogation.

Madeline has taken out a restraining order against her ex so Booth thought the other man would be carrying around a grudge. But the ex-husband wasn’t mad enough to kill her and the only reason Madeline had taken out the order of protection was because he was trying to stop her from looking for half thought up miracles for their daughter. He was able to accept their daughter was going die yet his ex-wife refused to believe she couldn’t do anything more. And that’s why she stopped the father of her child from having say and it’s also why she took frequent trips after her daughter died to a small clinic.

Madeline trips were explained once Bones realized she had been cryogenic preserved. Her body was frozen until someone either changed their minds or discarded her body out of spite.

But Madeline never chose to be persevered. The same clinic that she was most likely frozen at was also the clinic she visited for her daughter – that’s who was the patient. And Madeline would never have changed her mind about doing it to herself because who else would pay the expensive fees to keep her daughter frozen. It surely wasn’t going to be her ex.

After a lot of back and forth, Cam decided to go to dinner with Arastoo and his parents although she later wished she wish she hadn’t. The dinner was a bust but it wasn’t all of the parents fault. They were more upset with their son for keeping secrets like how he’s basically playing stepdad to Cam’s daughter.

Arastoo started off on the defensive and when his parents pushed old buttons with him – it made him snap. He yelled at his parents then took his lady and let. And now Cam feels so guilty. She doesn’t want to be the cause for so much strife.

And neither does Booth.

Booth was offered a promotion. However a requirement of the new job would be a move to Germany. Which was why he’s reluctant about taking on this amazing new opportunity. Booth knows that his family would have to make a sacrifice on his behalf and didn’t want to ask that of them.

With the ex-husband firmly out as a suspect, there wasn’t really anyone left to question for Madeline’s death. She kept most to herself or to the clinic. Apparently he daughter wasn’t the only connection she had to the place. Madeline also helped Dr. Summers with his grants. She was assisting him in getting more funding for the clinic but not everyone saw that behavior as platonic.

Summers was married and his wife ran the clinic with him so she must have noticed the behavior. And yet when she was brought in for questioning – she claims to have only been a part of the dumping process. The Mrs. had found Madeline’s body in storage and chose to throw her away out of spite. But it was her husband, Dr. Summers, that put Madeline into the cryo crypt.

Bones and Arastoo found evidence of someone gently treating the body before it was dumped and that led them to the doctor. He loved Madeline though she didn’t love him so he thought if he was able to reanimate her with her daughter then she’d finally be ready to love him back. His wife on the other hand didn’t matter to him.

So Arastoo had a good day in the office and later his parents visited him and Cam at home. They wanted to tell him that they were proud of him and they only asked all the questions because of interest and not out of judgment. Aarastoo was waiting for them to be disappointed so he naturally he saw more than what there was when the truth is his parents like Cam. They think she’s a catch.

As for Booth – his family isn’t the only reason he doesn’t want to take the new job. He’s afraid that the government is going to ask him to be a sharp shooter again. And he won’t survive returning to that lifestyle.