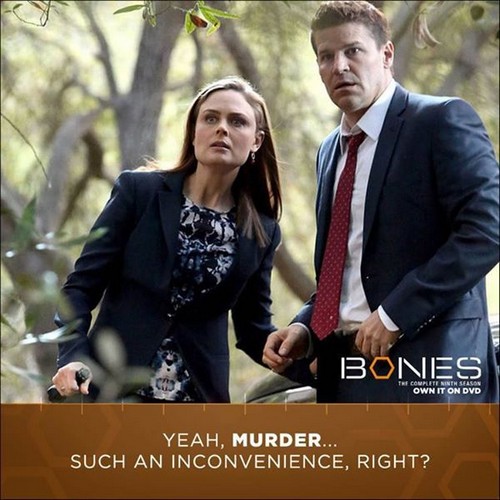 Tonight on FOX Bones returns with an all new Thursday September 25, season 10 premiere episode called, “The Conspiracy in the Corpse.” On tonight’s episode Booth is in jail and awaiting trial as Season 10 begins, but the Jeffersonian team wonder if the remains of a man who died 16 years ago have something to do with the conspiracy that put him in prison—a place Booth shares with criminals he helped lock up. Meanwhile, Sweets and Daisy share a surprise with the lab.

For those of you who are not familiar with the show, Bones is an American crime comedy-drama television series that premiered on Fox in the United States on September 13, 2005. The show is based on forensic anthropology and forensic archaeology, with each episode focusing on an FBI case file concerning the mystery behind human remains brought by FBI Special Agent Seeley Booth (David Boreanaz) to the forensic anthropologist Dr. Temperance “Bones” Brennan (Emily Deschanel).

On tonight’s episode In the season 10 premiere of BONES, Brennan and the Jeffersonian team are desperately working to get Booth out of jail, clear his name and absolve him of crimes he did not commit. The remains of a man who has been dead 16 years could be the point of origin in the entire government conspiracy that ultimately put Booth in jail. Meanwhile, Booth is faced with a challenge from a new and politically ambitious FBI agent (guest star John Boyd). As he awaits trial, Booth also realizes that many of the convicts with whom he is locked up are criminals he put in there, and Daisy and Sweets have a surprise for the rest of the Jeffersonian team.

Tune in at 8PM EST on FOX to watch the season 10 premiere episode of BONES. We’ll also be updating fans right here as the show airs so be sure to check back in with us. Brennan and Booth have had a long television run. Do you like that their characters mix up business with home life? Hit up the comments and tell us your thoughts about their tangled relationship!

It’s been three months since the shoot-out at the house and so far prison is just not agreeing with Booth. He’s cut off from his family and friends. And the people he does get to see on a regular basis are the same ones he put in jail. With the way things are looking, odds are Booth won’t make it to trial and that might very well have been the plan for whoever set him up to begin with.

But the squints weren’t simply going to sit this fight out. At least not with their friend’s life on the line. As of now, they’re doing all they can for Booth with what little information they have from the conspiracy theorist that left them all of his past work. And one name kept coming up in the investigation – Cooper.

Cooper mysteriously died sixteen years ago and his death appears to be the catalyst to everything that happened with the blackmailer afterwards. So the Jeffersonian team is going to investigate his death and while they do – Bones is going to use her own measures in releasing her husband.

Bones used some of the information they found to blackmail an official into releasing her husband and freeing him of all charges. She was tired of visiting him at the prison and seeing fresh bruises. And so she broke the law.

What she did wasn’t right in the ethical sense but Booth was angrier at her for showing their hand than he was at what she did. She alerted the blackmailer to the fact they still have the information he or she had tried to get rid of. So whatever their next move is – they have to do it fast. Else they risk getting killed or worse imprisoned.

Booth wants to return to work and if not that then to go about investigating as if he was still on the Bureau payroll. Bones tried to talk him out of it and so did Sweets. Yet neither of them had the desired effect on Booth – he left the safety of the new house and got into a well-regarded suspect’s face. So naturally his old boss at the FBI called him in.

Legally, he can’t fire Booth, but that doesn’t mean either of them are counting on going back to their former relationship. So, for the time being, Booth is back on the job and Sweet nominated himself to be in charge of his friend.

Sweets had always liked and respected Booth. That’s why he’s willing to put his own career on the line by supporting his albeit out of control friend. However Booth isn’t the same man that went to prison. There are a few things about his demeanor that have changed for the worse. And for someone like Sweets, maybe he shouldn’t risk getting too entangled in Booth’s life anymore.

Sweets and Daisy are about to have a baby. And what’s best for their family should be what comes first!

The web of conspiracy and blackmail goes so far back that it doesn’t appear to have a head but many heads. As if it was run by an organization. The victim, Cooper, showed signs of fighting off an attack and the person intent on harming managed to get to him from inside of a hospital.

The doctor was blackmailed into looking the other way and just as they were getting somewhere by looking at Cooper’s bones – an unknown and distant family member sprouted up and demanded that he get re-buried.

Thankfully there was a backup plan in order. Hodgins had switched out the bones before the court order could go into effect. And as a result they caught something. Their victim was killed by a fatal serum that was originally created in their suspect’s lab.

No matter which way they turn – everything was falling into place and there was only man at the center of it. So search warrants were issued and Sweets had taken possession of a very important file when someone later targeted him.

Sweets was killed trying to unravel the web of lies and now it’s up to the team and more importantly Daisy to see that justice gets done!