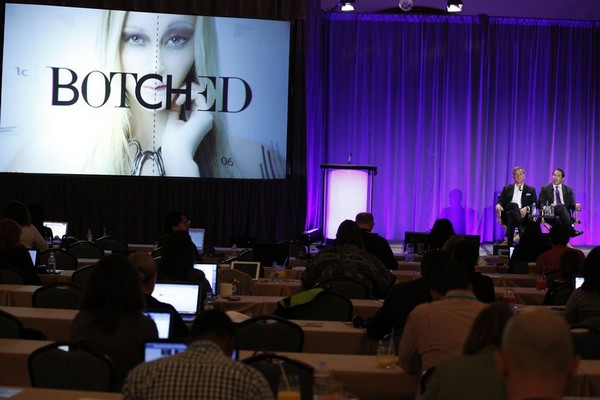 For those of you not familiar with Botched, some patients, their quest for ultimate perfection ends in disastrous results. World renowned doctors Paul Nassif and Terry Dubrow – the best of the best and leaders in their field – will be tasked with some of the most difficult operations of their careers when they try to reverse the effects of horrendous plastic surgeries. In each one hour episode, the doctors will be tasked with restoring, fixing and adjusting what appear to be unfixable, botched procedures and operations. Viewers will follow each patient every step of the way from the complex medical procedures to the intensive recovery process that will result in the ultimate reveal at the end of each episode.

On tonight’s episode Kimber James, a transgender adult film star, asks the doctors to fix her botched breasts, nose and vagina. Also: An Internet celebrity with bad butt implants seeks help; and Paul takes on a severe case of a deviated septum.

Tonight’s episode of Botched follows ex-porn star Kimber James. By the age of 23 she had twenty-four plastic surgeries, including but not limited to her five breast surgeries, rhynoplasties, breast augmentations, liposuction, chin shavings, and having her ears pinned back. She had a sex change a year ago, and now her “vagina looks like a baseball mitt.” She wants to get her vagina fixed and look natural, and then she is done with plastic surgery for good.

Kimber strips down in goes in to the exam room so that the doctors can see what they are looking at. The doctors realize that she needs inner lips on her vagina and a clitoral hood, and once they add them her vagina will look more natural.

The next Botched patient tonight is Renee, she became a YouTube celebrity when she posted a video of her flipping her butt implant up and down and the video went viral. She went through a midlife crisis and decided to get silicone injections so her butt wasn’t so saggy. Six months after her surgery she got really sick, and went to the hospital. She was informed that the silicone had spread through her entire body and attached to her organs and caused auto-immune disorder. Despite her doctor’s order she went and got new implants because her butt looked saggier than before. The second round of implants didn’t fit well in her butt and are the ones that she posted on the internet that can rotate. She had those removed as well.

Renee heads to her consultation with the doctors and fills them in on her butt’s history, and confesses that she has body dismorphia, which is a mental disorder. Regardless of how many surgeries she has, or how well they fix her butt, she still isn’t going to like the way she looks and will want to continuously fix it. The doctors agree to give her a lift, after she goes to therapy and comes to terms with the fact that she isn’t going to have the perfect body.

Tonight’s next Botched patient is Jenn, she broke her nose when she was in elementary school, and took several soccer balls to the face when she was in high-school. For her graduation present her mom agrees to pay for her nose job, since it was so deformed from being broken multiple times. When she got her nose job the doctor said that she had the most twisted septum she has ever seen. After her surgery, she has a huge bump on the left side of her nose that never went away and a wire is visible and hanging down from the inside of her nose.

Jenn heads in to her consultation and explains to the doctors that her Botched nose has caused her to be depressed and experience a lot of anxiety. The doctors take her in to the exam room and check out her nose. The piece of metal hanging out of her nose is actually a stitch and they are concerned about removing it, because it could be what is holding her entire nose together. They agree to do the surgery and explain that once they get her nose opened up they will be able to tell what more needs to be done.

It’s surgery day, Kimber checks in to the doctor’s office and is ready for her three surgeries. Before the doctor’s put Kimber to sleep, she asks the doctors to save her implants to that she can sell them on her website. The last set of implants she had removed she sold for $5,000.00.

First the doctors start with her breasts, and because Kimber used to be a man, she doesn’t have hardly any fat on her chest. He puts in smaller implants and sews in some mesh to line the inside of her breast so that her skin isn’t so thin. Meanwhile the other doctors work on her nose and her vagina, with minimal surgery.

Up next is Jenn’s surgery, the nurse takes her back to get her ready. Dr. Nassif and Dr. Nubrow scrub in for surgery while the nurse comforts her and reassures everything is going to be fine. The doctors come up with a game plan, and plan to use tissue from her scalp and cartilage from her ear. Once they get her nose cut open they realize that the damage was much worse than they thought, and she has one of the top ten worst septum’s they have ever seen. They complete the surgery and are sure that Jenn is going to be pleased with the outcome.

Seven days later Jenn heads back to the doctor to get her cast removed, she bursts in to tears when she realizes she can breathe again. She hasn’t been able to breathe through her nose since she was a child. When she sees the finished product in the mirror she is overwhelmed by how perfect her nose is. She gets dressed up and heads out to surprise her mom with her new nose. Jenn’s mom is amazed by how great she looks after her surgery.

Now it is time for Kimber’s big reveal, she is pleased with her nose and breasts, and the doctor checks out her vagina to make sure it is heeling well. Kimber is sure that her vagina healed so quickly because of all the pounding it has endured. But overall she is happy with the outcome, and is glad she looks less “pornified.”