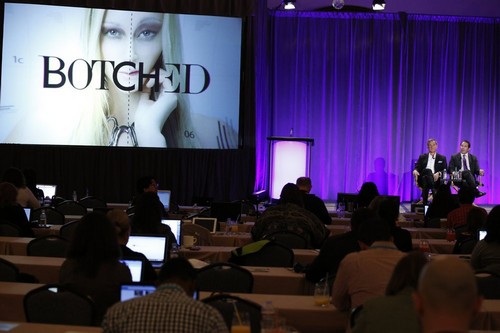 Botched continues tonight with a new episode called, “Girls Gone Wildd.” On tonight’s episode, Terry helps a woman with uneven breasts; an anxious patient stays awake for her tummy tuck; and model Lacey Wildd asks the docs to upgrade her implants to QQQ.

This reality series follows the professional and personal lives of several Beverly Hills plastic surgeons as they nip, tuck, augment and slice their way through their patients.

On the last episode a personal trainer is willing to take extreme measures to remove a head scar, while a cancer survivor asks the doctors to make her botched reconstructive breasts look natural again. Did you watch the episode? If you missed it we have a full and detailed recap, right here for you.

On tonight’s episode a woman with uneven breasts; awake for a tummy tuck; Lacey Wildd wants to upgrade her implants.

Tonight’s episode of Botched kicks off with Lacey, who has “mega boobs.” She is only one cup a water short of a gallon in each breast. She’s proud to be number six right now in the Guinness Book of World Records, and she desperately wants to be in the top three. She has been building them up since she was 21 years old, but she has had some serious side effects. She ripped her peck muscle and ruptured a vein, so she has pig skin injected underneath her breasts to hold them up. She really wants to get another boob job and increase her size to QQQ.

Salina on the other hand hates her breasts and says that they are “horrendous.” She had a flat chest her entire life, so she got a boob job and hated how big and hard they were. In 2012 she decided to get a second surgery, but her breasts came out lop-sided and one is obviously higher than the other.

Salina heads in to her consultation with Dr. Nassif and Dr. Dubrow. She fills them in on her “horrible boobs” and wants them to be “non ripply and even.” She heads in to the exam room, and Dr. Dubrow says that he can make them “even and pretty,” but they are going to have to sew in some mesh to create some scar tissue and fill in her cleavage.

Christina has a “Franken Tummy” and her belly-button “looks like a vagina.” After she had three children and her husband left her, she decided to get a tummy-tuck. But, after her surgery she got infected and got Mersa, which is a flesh-eating bacteria. Once the infection cleared up, her stomach scarred. She heads in to her consultation with Dr. Dubrow and Dr. Nassif and fills them in on her previous surgery. Christina heads in to the exam room, and is freaked out because she is scared to get another infection. Dr. Dubrow says that her stomach is fixable, and if she is willing to take on the risk of getting another infection, then they will help her.

Dubrow’s office. Salina heads in to the surgery room and Dr. Dubrow goes over the procedure with her. Salina confesses that after her last surgery she took the bandage off the day after her surgery, Dr. Dubrow is shocked and assures her that if she leaves the bandage on this time then that won’t happen. He puts her under and removes her first implants, and is shocked by how flat-chested she really is. Once the procedure is over, Dr. Dubrow is pleased with the results and thinks that Salina will be pleased.

Lacey heads in to her consultation with Dr. Dubrow and Dr. Nassif. They are shocked by how large her implants are, she informs them that they aren’t actual implants they are extenders, and she has pig skin underneath them. Dr. Nassif is embarrassed when Dr. Dubrow starts discussing Lacey’s sex life with her and what positions she can do since her breasts are so large. They head in to the exam room, and Dr. Dubrow is shocked, he has never seen breasts this big before. The doctors break the news to her that she is “very lucky” and if she goes any bigger they could literally burst out of her skin. Lacey is discouraged that they won’t operate on her, and is determined to find a doctor who will.

It’s the day of Christina’s surgery. And since she has such horrible anxiety, they have decided to let her stay awake during surgery. They prep her in the surgery room and have decided to give her anesthetics through an IV. They put up a curtain so that she can’t see where they are cutting her stomach open. Dr. Dubrow proceeds to remove some of her scar tissue, and move her incision line down below her bikini line.

Christina heads back in for her check-in, and is shocked by how great she feels after her surgery. The last time she had a tummy-tuck she was bed-ridden the next day. She is amazed by how great her stomach looks after just 24 hours, and Dr. Dubrow reassures her that there are no signs of infection and if she does get Mersa again they will take care of it ASAP.

Six weeks later, Christina feels amazing and confident, and is ready to start dating again and be intimate if she wants to. She has been hiding out since the surgery and she is ready to surprise her friends with her transformation. She wears a crop top to a restaurant and her friends are amazed by her new body. She jokes that she is going to start wearing a bathing suit to the grocery store.

Salina models some lingerie for her boyfriend Erik and debuts her new breasts. He gushes about how sexy she is, and he can’t believe how much more confident she has become. He is excited about how great she feels in her body now, and happy that she is happy.