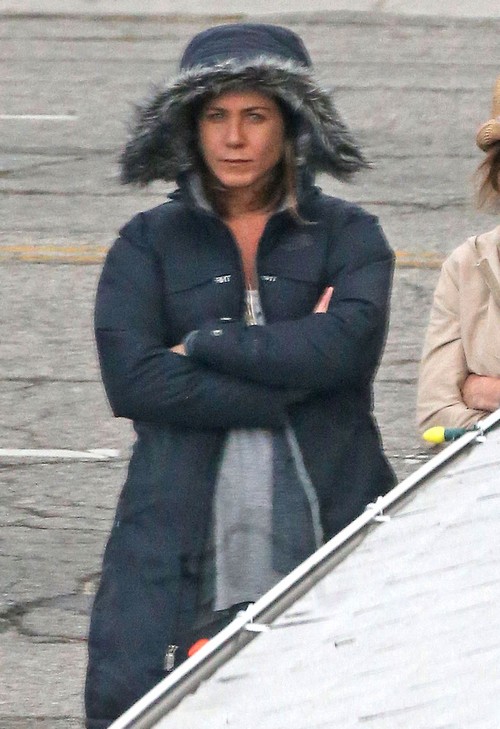 Angelina Jolie and Brad Pitt married signal that this might just be the second worst day of Jennifer Aniston’s life- with the first being the day that Brad Pitt left her for Angelina Jolie. Jen has been engaged to Justin Theroux for two years with no real hint of marriage in sight. In fact if I didn’t know better I’d be thinking that they had broken up because Jen and Justin are really never together. She lives in California and Justin is NYC based and there seems to be a stalemate in the living situation. Jen recently gave an interview talking about how she doesn’t feel like less of a woman for being childless at 45, but underneath that she certainly must think about that life that she had planned with Brad and how he is now living it with someone else.

No doubt hearing that Brad Pitt and Angelina Jolie officially married in France last weekend has to feel like a shot to Jennifer Aniston’s heart. Even if she really is over Brad she at one point really craved exactly the life that he has- the marriage with a big family. Instead Jen is currently stuck in limbo with another guy that seems to be an odd choice. If Justin Theroux really wanted to marry Jen he would at least still be living with her right? Instead they have made only one red carpet appearance together in the last year. That’s pretty depressing, don’t you think?

Do you think Jen is taking Brad and Angie’s marriage hard and if so do you think she’ll use it to try and pin Justin down once and for all? Or maybe this is a reality check that she keeps choosing the wrong men and then wonders why she doesn’t get what she really wants. Brad Pitt and Angelina Jolie may have hooked up while he was still married to Jennifer Aniston, but that relationship has remained intact since the moment he was available again. That fact must be a bitter pill for Jen to swallow don’t you think? Tell us in the comments below!