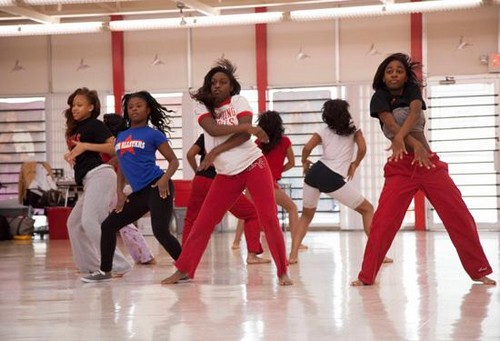 Tonight on Lifetime their new reality show Bring It! premières.  “Bring It!” shines a spotlight on the elite world of hip-hop majorette competitions. Coach Dianna Williams (aka “Miss D”) and her Dancing Dolls troupe refuse to lose, pushing themselves to the limit each week in the relentless pursuit of victory. Every pump, thrust and high kick on “Bring It!” highlights the triumphs and struggles of intense competition, where errors aren’t tolerated, mediocrity isn’t excused and only a win is acceptable.

Founded in 2001 by Dianna Williams, or “Miss D,” the Dancing Dolls of Jackson, Mississippi, are one of the country’s preeminent dance troupes, with over 15 Grand Champion titles and more than 100 trophies under their belt. With their adorable smiles and unique high-energy dance style, the Dolls, ages seven to 17, have taken the world of hip-hop majorette competition by storm. Each episode follows the top Dolls and their dedicated moms as they prepare for cutthroat competitions, parades and showcases, culminating in nail-biting stand-battles against their biggest rivals.

On tonight’s episode the Dancing Dolls dance team prepares to compete against a fierce rival in Chattanooga, TN. Head coach, Dianna, forbids a number of dancers from participating at the event after less-than-perfect performances at rehearsal and team captain, Kayla, struggles with the added pressure of performing a solo. Meanwhile, Rittany, one of the dancers’ moms, butts heads with Dianna and threatens to pull her daughter from the team.

Tonight’s premiere episode of Bring IT! is sure to be a drama packed one, which you won’t want to miss. So be sure to tune in for our live coverage of Lifetime’s Bring It! premiere – tonight at 10PM EST! While you wait for our recap, hit the comments and let us know how excited you are the premiere of Bring It!?

“Bring It!” shines a spotlight on the elite world of hip-hop majorette competitions. Coach Dianna Williams (aka “Miss D”) and her Dancing Dolls troupe refuse to lose, pushing themselves to the limit each week in the relentless pursuit of victory. Every pump, thrust and high kick on “Bring It!” highlights the triumphs and struggles of intense competition, where errors aren’t tolerated, mediocrity isn’t excused and only a win is acceptable.

Camryn has been dancing since the age of 6 and became part of the Dollhouse Dance Factory at age 10. She was voted Head Drill Master of the Dancing Dolls in July of 2013.

Crystianna has been dancing since the age of 5 and joined the Dancing Dolls in 2006. She left for a short period of time to do cheerleading, but has since returned to the Dolls in 2008.

Kayla has been dancing since the ripe young age of 2, always moving and rocking to the music. She joined the Dancing Dolls in February 2008 and has since worked her way up to captain of the team.

Sunjai, also known as “Cool Flame,” has been a dancer since the age of 5. Dancing is her passion and she has been a part of the Dolls since 2012. Dancing runs in the family—she was inspired by her aunt at a young age and her dad is one of her biggest fans.

Tonight on the series opener, the moms and girls are showing up to practice at the Dancing Dolls’ studio known as Dollhouse. The Dancing Dolls (DD) troupe is a top dance team in the South. And if you thought Abby Lee Miller was tough and she had some crazy moms to deal with…well Bring It is like Dance Moms on steroids!

Sunjai and her mom arrive. Her mom, Selena, shares that everyone at the studio calls her Beyonce. While she says she doesn’t TRY to look like Bey, she definitely thinks she looks good. Sunjai has been with DD for about one year and comes from a family of dancers.

The team has a competition in 2 days so they need to get right to practice. Miss D kicks out Selena who lingers for what looks like just simply to be on camera longer. This is a big troupe and Miss D has a lot of girls to manage. She briefs them on what she expects the day of the competition from hair to make-up, to attitude.

The moms stand outside trying to watch, complaining that they cannot be inside Mimi, Camryn’s mom tries talking sense into the ladies telling them there is not much they can do because Miss D is in charge and the girls are there to practice.

As the moms wait outside, the girls are just beginning their practice inside. Kayla, Tina’s daughter, knows she wants dance in her life forever. She is up first and showing her moves. Miss D tells her she is giving her only a small percentage of what she can give. She is not “bringing it.” Tina shares that Kayla is nervous because of the pressure and Tina feels it as well. Kayla is the team captain. Outside, Mimi gives her a positive outlook and tries to make her feel better.

Miss D tells Crystianna that she expects more from her. Her mom, Rittany, watches her from outside. The ladies start complaining again about being outside. They recruit Mimi to go in and ask Miss D if they can come in. She opens the door but chickens out. Next thing the moms know…Miss D is heading towards them. They all get scared and try to explain their intentions. She tells them that she pays the bills and she is head dog. She tells Selena not to wear heels if her feet hurt, and she tells the moms that if they are cold, they need to sit in their cars or leave.

Some of the girls are told to sit out because they are not putting in full effort. After Selena sees that Sunjai is taken out she starts acting crazy. The moms get irritated with her and think she is a little crazy. Rittney is getting anxious because it is getting late and the girls have homework. She wants her daughter to do well in school and cares more about her grades than dancing. She opens the door to the studio and tells Miss D to wrap it up because the girls have school the next days and have homework to do. Good for her!!

Later, Kayla meets with Miss D about her solo and shares her concerns. She begins to cry. Miss D is very sensitive but doesn’t let up on her and still wants her to perform her solo because it is an important lesson to work through those fears.

It is competition day and no one knows where Rittney is at. Miss D opens up to the moms and talks about how she cares for the girls and does what she does to give them a good opportunity and keep them out of the lifestyle she was involved in when she was younger. She admits that she participated in adult films and did what she needed to do to pay the bills. She wants the best for the girls and works hard because of how much she cares.

Miss D briefs the team and tells them they’ll be competing against a tough troupe, the Ladies of Excellence. Miss D tries to motivate Kayla and get her ready for her solo. She did great but still need to work on some little details. Overall, the team was happy with her solo. Tina was her biggest cheerleader and a major support. Speaking of…Still no sign of Rittney yet and Crystianna asks Mimi if she knows where she could be. Mimi tells her she’ll try to call her. Crystianna is really upset.

Rittney finally shows up and Miss D is upset. Miss D tells her that she needs to be a better parent to her child and she should have been there from the beginning. They go back and forth for a while until Miss D forces her out and finishes getting the girls ready. The other team was mediocre with half of the girls putting all their effort in, while others giving only half. It showed and they were not in sync as a result. It was obvious after watch the DD why they win consistently. They put all their effort in and had much more energy.

Kayla won the solo competition. Dancing Dolls won the overall competition as well. One more win for the dance team! Tell us what you think of this new Lifetime show. Are you a fan?