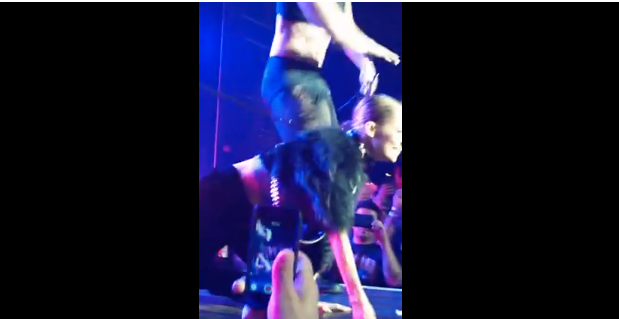 Sometimes, I feel like Britney Spears doesn’t even understand basic societal norms, and it’s difficult to understand how her friends and family let her do stuff like this – unless she just doesn’t tell them? According to video leaked from Britney’s most recent ‘Piece of Me’ performance in Las Vegas [on Tuesday], Britney thought it might be a good idea to bring Nicole Richie on stage in bondage gear, and treat her like a ‘slave’.

I get it – it’s performance art. But it’s also incredibly insensitive and too often fetishized, and that doesn’t seem to have entered anyone’s minds. I mean, this isn’t even the first time Britney’s done this – apart from Nicole, she’s brought her boyfriend and other famous friends on stage in a very similar manner. She reportedly chose Nicole from the crowd, put her in bondage gear, and then led her around the stage in all fours.

They hugged it out during the ending of the performance, and Britney later tweeted, “Can we all give a round of applause to @NicoleRichie for playing along in the show tonight? U looked hot crawling on all fours ;)”