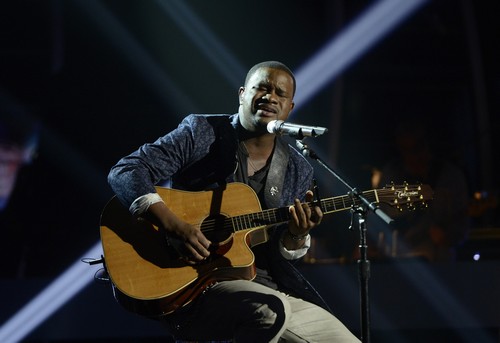 CJ Harris sang, “If It Hadn’t Been For Love” by The Steel Drivers for his song choice for the “(I’m With The) BAND!”– themed performance show. The IDOL hopefuls will act as the lead singer for Rickey Minor and his band, performing their favorite songs. Did you watch tonight’s performance show?  Just in case you missed tonight’s show we have you covered and you can read our full and detailed recap here!

On last week’s episode Caleb sang “Invisible” by Hunter Hayes and Harry liked his rendition saying, – “I specifically don’t go to rehearsals, because I don’t care what you do at rehearsals, I care what you do when the red light turns on. I want to make sure you know what I mean when I say pitch, and intonation. You have a tendency to sing sharp, this is something you can fix, it’s a discipline. You’re talented and you can do it. You gotta get that pitch in check.”