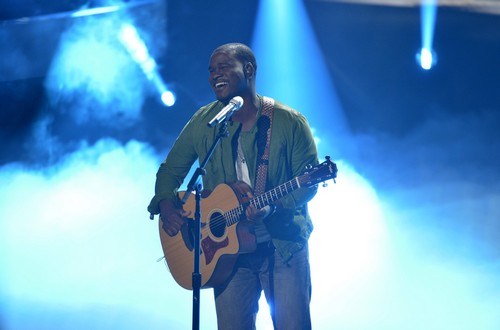 C.J. sang, “Whatever It Is” by Zac Brown Band this week for his Country song choice.  Tonight we got double the performances from the Idol hopefuls as they sang both a Country and a Rock n Roll song in their bid for America’s votes.  Did you see C.J.’s Rock n Roll song?  If you missed it we have the video, right here. The Top 6 will really have to bring their A game tonight to stay around for another week, we expect a higher level of performances as the contestant pool diminishes as we head towards the May finale.  Did you watch tonight’s performance show? Just in case you missed tonight’s show we have you covered and you can read our full and detailed recap here!

On last week’s episode C.J. sang “Gravity” by John Mayer and Keith liked his rendition saying, “How are you doing man?  That’s one of my absolute favorite Mayer songs and it’s a really good song for you, that was a good call Caleb.  If you are going to do an emotional thing I like it to be more of an arc, that was the only thing.  Man, I like your voice every time you sing, that was abullseye man.”