BY Heather DiPietro on May 14, 2014 | Comments: one comment
Related : Reality TV, Recap, Television 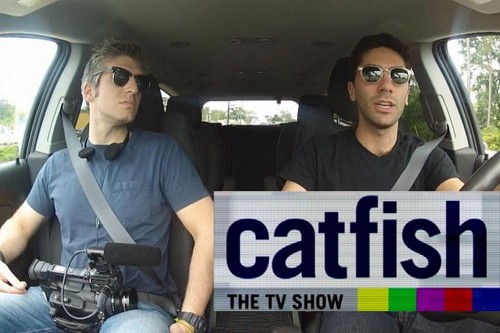 Tonight on MTV their series about online dating show CATFISH The TV Show airs with a second episode titled “Antwane & Tony”.  On tonight’s episode, a woman becomes concerned about her cousin’s relationship with a man he met online.

Catfish tackles the mystery and complexities of dating in a digital world. According to an MTV survey of Millenials 18-24 years old, 1 in 4 has online dated, 1 in 2 has a friend who does it and, in the past three years, traffic to top 10 online dating sites has tripled. In a world where everyone is constantly connected digitally, social media has made communicating easier but this digital world might also complicate relationships.

On the last episode of Catfish: The TV Show, A man’s online accounts are hacked by a woman he met on Facebook in the Season 3 premiere titled “Craig & Zoe.”

On tonight’s episode  with Antwane and Tony, is this new relationship doomed before it even starts? Are they who they say they are and will love truly blossom? One thing is for sure, this is going to be an emotional journey filled with mystery, surprises and some revelations.

Tonight’s episode of Catfish: The TV Show on MTV at 10 PM EST is going to be exciting, don’t forget to come right back to this spot and watch the show with us.

Tonight’s episode of Catfish kicks off with Nev and Max checking their e-mail. They receive an e-mail from a woman named Carmen, who claims her cousin Antwane is being catfished by a man named Tony. Apparently Antwane and Tony have been talking for three years, but he has never met Tony or even seen a picture of him.

Max and Nev decide to give Carmen a call to get more information on Antwane and Tony. Apparently three years ago Antwane met Tony on a phone chat line, and he talks to him every day. But Tony supposedly doesn’t use computers, so they can only talk on the phone and he can’t send Antwane any pictures of himself. Max and Nev head to Cincinnati to get to the bottom of it.

Nev and Max meet up with Carmen and she shows them how the phone chat line works that Antwane met Tony on. She takes them to meet her cousin Antwane. Antwane reveals that he has absolutely no number to contact Tony because he calls from restricted numbers, he does remember an old number that he used to call from months ago and he gives it to Max and Nev so they can get to work trying to find Tony.

Nev and Max sit down in a café to get to work on tracking down Tony. All they have to go on is one old number. They hit Google and find an address to the number in Cincinnati. It’s registered to a man named Anthony Thomas – they also find mugshots online of Anthony Thomas. They are concerned that Antwane is in a relationship with a man in prison. Tony was arrested right around the same time Antwane starting talking to him, if he is in jail now that would explain why he can only call once a day and the number shows up restricted.

Max and Nev head back to Antwane’s apartment. They show him the address they came up with and the mugshot, they reveal that it is possible that Tony could be in jail. Antwane is devastated.

The next day Max, Nev, Antwane, and Carmen head to three addresses that they found online that were linked to Tony’s old phone number. After checking out three creepy and abandoned houses in the ghetto, Carmen announces the reason they can’t find Tony is because she is Tony. She tells Antwane that is what he gets for calling her “Fat Ass Kelly Price.” Nex, Max, and Antwane are all shocked. Carmen just keeps laughing at them.

Carmen reveals that she called him in her deep voice one day and told him that she met him on the chat line because he was making fun of her in front of a house full of people. Max informs Carmen that she is lame, she laughs and refers to herself as the “Queen of Catfish” and insists that she could have made it on any television show-but they should feel honored because she wound up on their show. Meanwhile Antwane got back in the car- he is furious.

Max, Nev, and Antwane leave Carmen standing in the middle of the street, she has to catch a ride with the producer.

The next day Max and Nev pay Carmen a visit. She announces to them that she does a “damn good job catfishing people and she is proud of it.” Max begins arguing with her and making fun of her because she keeps saying “you aint shit.” The producer drags Max and Nev back outside and yells at them. He tells Max, “you’re sabotaging your own show you can’t sit there and make fun of the way someone talks. Go back inside and get her side of the story.”

Max and Nev swallow their pride and head back inside and try to talk to Carmen, she confesses that she just wanted to be on TV. But, she still wants to be friends with Antwane. She admits that she feels sorry now.

Max and Nev sit down with Antwane, and he is still furious with her. He admits that he is definitely over Tony, but he don’t like Carmen right now.

A month later they video chat with Antwane and he reveals that he has a decent job now, but he still isn’t talking to Carmen. They call Carmen and she says that since they left she has been going to the gym three times a week, and she hasn’t been doing any more catfishing.